The gift: A medal for Ichiro 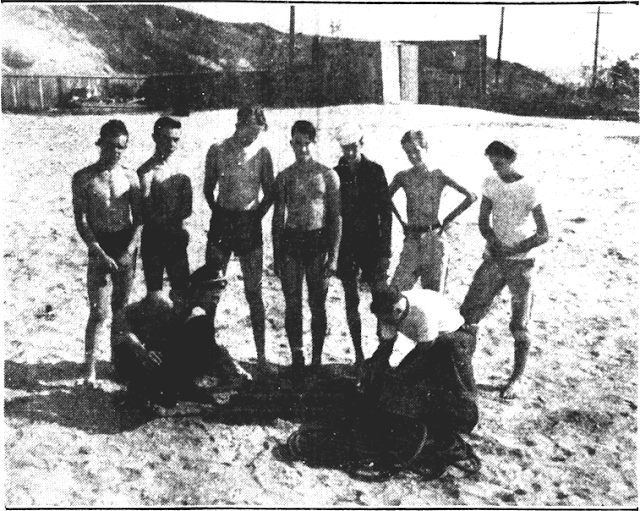 ABOVE: Russell Cleary (standing, far right) with a Sea Scout troop at Newport Beach in 1940, viewing a diving helmet and breathing apparatus as part of training for a Veterans of Foreign Wars Bridge of Honor program. To qualify for honors, the boys planned to "descend beneath the sea with the helmet on". (Image, "Santa Ana Sea Scouts to Use Diving Helmet", Santa Ana Register, January 24, 1940)

He didn't know what else to do. The world was at war. Russell Cleary's childhood friend had been taken from Orange County to a desert camp by the U.S. government, before they'd even had a chance to finish their senior year at Santa Ana High School. The two friends had been looking forward to the California Interscholastic Federation (CIF) Citrus Belt League championship track and field competition.

Cleary only did what made sense to him. He mailed a talisman of hope to his friend, Ichiro "Cheesy" Yoshimi, Block 38, Colorado River Relocation Center, Arizona: a pole vault medal. 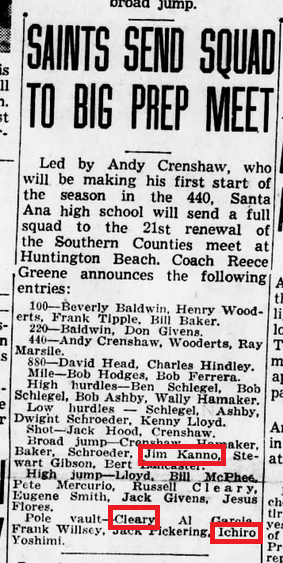 RIGHT: Two months before the Yoshimi family and all Japanese Americans were forcibly removed from Orange County in May 1942, childhood friends Russell Cleary and Ichiro Yoshimi competed at the southern California counties track meet in Huntington Beach. Russell competed in high jump and Ichiro in the pole vault competition. Competing at the same meet was James Kanno, who would become in 1957 the first mayor of Fountain Valley (formerly Talbert). Kanno's father, Shuji, was an elder in the Wintersburg Japanese Mission in Wintersburg Village, where the Kanno family were congregants. (Santa Ana Register, March 20, 1942)

"Dear Cheesy, I got 4th place in the meet with 10'6". I am sending you this medal because you deserve it," wrote Russell of the . "I know you could have done as good or better."

Enclosed was a small bronze medal with a yellow ribbon. Ichiro attached it to his watch chain and proudly wore it during his incarceration at Poston.

The story of the gift was shared in detention center and camp newspapers at Santa Anita and Poston, as well as in the Santa Ana Register by sports columnist Eddie West in his "West Wind: Here and There in Sports" column on August 5, 1942.

"A 'Medal for Cheesy' is the title of the little human interest yarn below", wrote West, "which comes from the Poston Press Bulletin by way of Kaz Oshiki of the Santa Anita Pacemaker, which published it as its story-of-the-week."

"I think you'll like it," added West about the story of the two high school friends, "...it is young democracy in action and at its best". 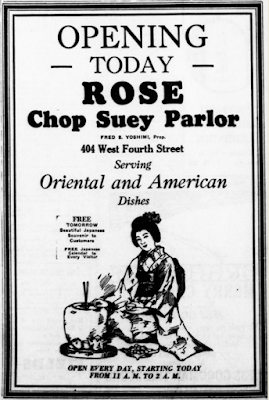 LEFT: Ichiro Yoshimi's father, Fred S. Yoshimi, owned the Rose Chop Suey Parlor at 404 West Fourth Street in Santa Ana (also sometimes listed at 402 West Fourth Street). This location is extant and is the 1915 red brick "Lawrence" building on West 4th Street, across the street from the Ronald Reagan Federal Building and United States Courthouse. Chop suey is an American invention and not authentic Chinese cuisine. It first started appearing in the United States in the 1880s and by the 1920s was a popular dish around the country. The advertisement at left was published on Christmas Eve in 1930. (Santa Ana Register, December 24, 1930)

West's republishing of the "A Medal for Cheesy" story included the back story that the two friends were "both looking forward to the Citrus Belt League Championships when they could match poles with vaulters from other schools. But in May, just before the event, Yoshimi with his family, suddenly became a resident of Poston, Arizona.  Instead of gripping the thin, strong bamboo in his hands, instead of his body agilely soaring through the air, Yoshimi took a firm hold of a paint brush and went to work in the sign department."

West already was familiar with Ichiro, who had been reported on in local sports articles and columns for his achievements in track and field. West also was in alignment with the newspaper in which his column was published, The Santa Ana Register. 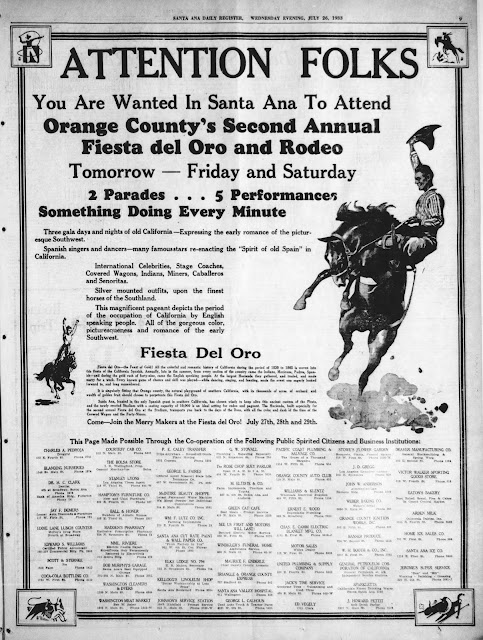 The Santa Ana Register's publisher R.C. Hoiles stood against the forced removal and incarceration of Japanese Americans, remarking in an opinion piece on October 14, 1942, that "few, if any, people ever believed that the evacuation of the Japanese was constitutional. It was a result of emotion and fright rather than being in harmony with the Constitution and the inherent rights that belong to all citizens...true democracy is always dangerous but it is the safest thing we have. If we are not willing to run any risks and cannot have faith in humanity and regard people innocent until they are proved guilty, we are on the road to losing our democracy."

RIGHT: Like many Japanese American-owned businesses, the Rose Chop Suey Parlor supported community events, such as the 1933 Fiesta del Oro and Rodeo for which the restaurant is listed as one of the "public spirited citizens and business institutions". (Santa Ana Register, July 26, 1933)

Russell Cleary, who passed in 2005, married his high school sweetheart, Louise Kenyon, before joining the Air Force after graduating from Santa Ana High School. His obituary, published in the Orange County Register (the former Santa Ana Register), notes that Russell operated fishing concessions at Irvine Lake and Anaheim Lakes until his retirement, and that "he lived his life to the fullest with unmatched enthusiasm, tending his fruit trees and grapevines, cooking and canning, eagerly reading anything about the Old West, walking, going to swap meets and farmer's markets..." 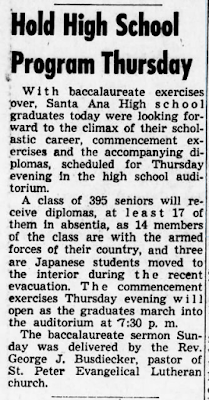 Ichiro Yoshimi, a 1942 alumnus of Santa Ana High School, passed in 1995 at the age of 71, with services held at the Honpa Hong-Wanji Buddhist Temple in Little Tokyo, Los Angeles. He is noted as the "beloved husband of Sachiko, father of Robert, Jon and Richard...".

In Poston, he was listed as a member of the camp's Red Cross, along with his father, "Fred" Saishichi (sic) Yoshimi (The First Year, Story of the Red Cross in Poston, September 1, 1943). Ichiro's older sister, Lily Yuriko Yoshimi, had been attending Santa Ana College in 1942 when her college aspirations were interrupted. In 2010, she was one of 22 students listed to whom the college wanted to provide a diploma (after the 2009 California law requiring public college and university systems to retroactively grant an honorary degree "to any student of Japanese American descent, living or deceased, who was forcibly removed and subsequently incarcerated during World War II").

LEFT: The Santa Ana Register reported high school graduation ceremonies held three weeks after Ichiro Yoshimi and his family arrived at Poston. The article noted that 14 members of the class were already with the armed forces and three were "Japanese students moved to the interior during the recent evacuation." Ichiro Yoshimi was one of the three, along with  Yone Sasaki (Munemitsu) and James Kanno. Not all high schools in Orange County listed the Japanese American students who received their diplomas in absentia. In 1999, the graduating class of Santa Ana High School asked former Fountain Valley mayor James Kanno to walk with them at their commencement ceremony. (Santa Ana Register, June 9, 1942)

Between 1942 to 1945, the CIF did not hold state meets for track and field, due to World War II. There were restrictions relating to gasoline rationing and no rubber for balls and other sports equipment. The Citrus Belt League competition in 1942 was as far as Orange County athletes would go that year.

A history of the CIF written by Forrest William Fraasch in 1972 records that in 1942 "discontinuation of the use of the bamboo pole for the pole vault became complete during this period. Bamboo shipments ceased because of the war with Japan." CIF also notes the bamboo pole "really required a science in vaulting" and that the war was a "catalyst in changing the types of poles to the present fibre glass since it was so hard to obtain the bamboo pole..." 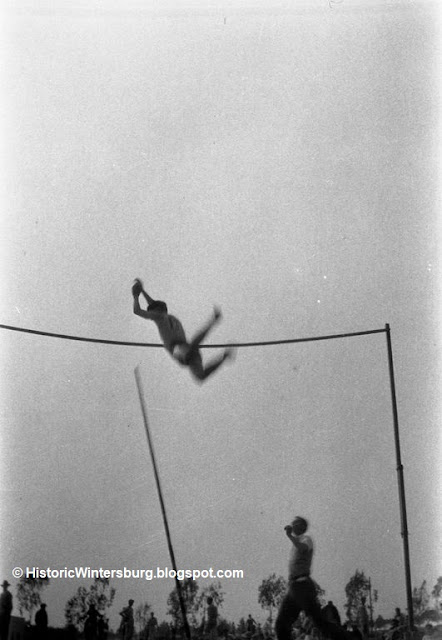 RIGHT: Raymond Furuta, son of Charles Mitsuji and Yukiko Yajima Furuta of the Furuta farm at Historic Wintersburg, during a track meet circa 1932. A star athlete who graduated from Huntington Beach High School in 1932, Ray participated in track during the bamboo pole era. (Photograph courtesy of the Furuta family collection) © ALL RIGHTS RESERVED

In 1945, when Japanese Americans began returning home to California, the CIF Southern Section initially placed restrictions on their participation in high school sports following a letter by the Burbank High School Registrar and Assistant Principal Theo. Kopp to Commissioner Seth Van Patten in November 1945. It was published on the front page of the CIF Southern Section Monthly Bulletin in December 1945 with the title, "Japanese boys create problem".

"With the return of a considerable number of Japanese boys to Southern California, it will be necessary for the CIF to come to some decision regarding the eligibility of these boys for next semester," wrote Kopp.  The eligibility requirement was related to credits missed for academic subjects during the fall 1945 semester for which they had not been able to fully participate due to their incarceration. The "problem" was referred to the CIFSS council for their February 1946 meeting (there is no mention of the resolution in subsequent Monthly Bulletins).

The politics and wartime hysteria that separated Russell Cleary and Ichiro Yoshimi in 1942 were bigger than the two friends, but Russell's tiny gift to Ichiro was noticed by many. The medal for "Cheesy" in Poston was a message from the outside world to hang on. He was not forgotten.

© All rights reserved. No part of the Historic Wintersburg blog may be reproduced or duplicated without prior written permission from the author and publisher, Mary Adams Urashima.
Posted by Surf City Writer at 9:07 PM No comments: