When the circus came to Wintersburg Village 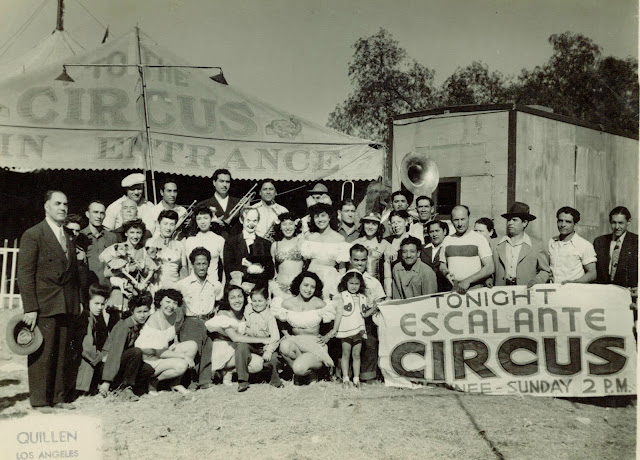 The Los Angeles Herald reported in 1910, "there are three particularly happy days in the American calendar, Christmas, Fourth of July, and circus day.  Of these, circus day is easily the merriest...somehow it holds a steady place in the human heart."

Word about a circus arriving in the middle of the peatlands would have spread exponentially from farm to farm, as fast as the little feet of chattering children, interrupting the normally quiet rural life with the sound of trumpets and calliope. 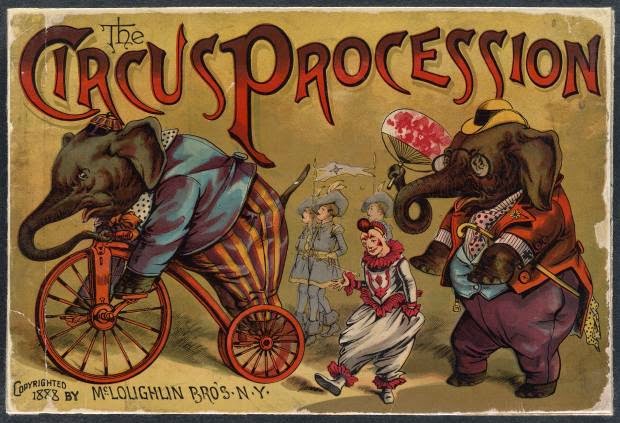 Crossing through the fields of sugar beets and chili peppers, came exotically-costumed performers, animals, clowns, puppet shows, live music.  It was the type of mind-blowing excitement that made farm children watch the minutes tick by on the school clock until the day was over.

Most farm country pioneers had little time for recreation and when they did, the available entertainment was simple: the beach, picnics, music from anyone with an instrument, and, when available, motion pictures.

Clarence Nishizu, a Wintersburg Japanese Mission congregant, recalled during his 1981 oral history interview an annual picnic for area families at Santiago Beach, an open beach at the ocean end of Bushard Street in southeast Huntington Beach.  Now and then, there were movies held at a large chili pepper warehouse in the Stanton area. 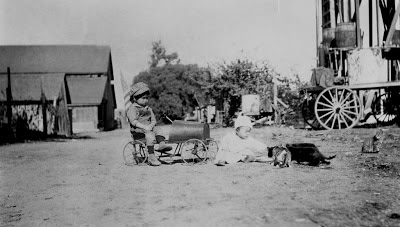 LEFT: The Furuta family children and others in the Wintersburg peatlands and rural Orange County usually created their own entertainment. (Photo circa 1915-1918, Wintersburg's Cole Ranch located near present day Warner and Gothard avenues, courtesy of the Furuta family) ALL RIGHTS RESERVED ©

"They didn't have any talkies," remembered Nishizu.  "But they had silent movies and they had a person called a 'benshi' who would stand in front on the side of the screen and while the picture was showing he would simulate the words spoken by the different characters in the movies. They had this maybe once, or even twice, a month."

When the Escalante Brothers Circus arrived in Orange County, they marched right down Wintersburg Avenue (Warner Avenue) to advertise they were in town.  Musicians, acrobats, trapeze artists paraded down the country roads in a loop through Wintersburg and Huntington Beach, before returning to their circus camp in Talbert (present-day Fountain Valley).  A trail of children followed. 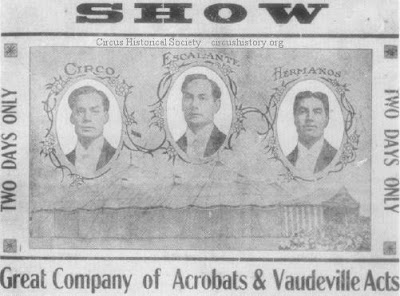 Escalante Brothers Circus
The Escalante family was described in a 1940s news clipping as "the most amazing family in circus history."  Attractive and charismatic, the large family created a sensation when they arrived in town with lively music and bright tents.  According to Nicolás Kanellos in his History of Hispanic Theater in the United States, the Circo Escalante Hermanos' great tent included a prosenium stage and, in addition to circus acts, their performances included melodramas and zarzuelas. 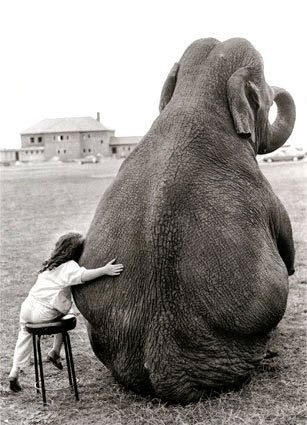 Bob Taber wrote about "The Escalante Circus From Mexico" more than fifty years ago in a January - February 1961 issue of Bandwagon.  At the time of the article, the original founding brothers--Mariano, Pedro and Marcus--were retired and living in Los Angeles.


"There was an era in the circus history of the Southwest, principally California, Arizona, New Mexico and Colorado, when the so-called Mexican circus filled its place. Performers from these later presented acts as stars of circuses playing from Coast to Coast, Canada and the United States," writes Taber.

"Between 1910 and the mid-thirties there came to this country from South of the border Mexican parents with their talented children," describes Taber.  "They had an entire show within the family as all members did several acts. Their expenses were small, local restrictions were not too strict and they prospered." 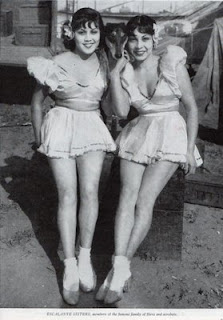 Originally from  Zacatecas, Mexico, the circus "moved via ox-cart across the trail-like roads of Mexico" and crossed into Texas to perform.  With the Mexican Revolution in full force, the Escalantes began performing more often in the United States.  Every family member was involved in circus performances, sewing their own tents and costumes.


"All these shows were patterned on the European type. They were one ring affairs with a stage at the end, where the dancing numbers were presented.  Two or three rows of chairs in circles surrounded the ring. These were reserved for extra money," describes Bandwagon.

RIGHT: The Escalante Sisters later performed with other circus groups across the country.

"A bright red carpet covered the ring floor with the initials of the show worked out in gold or white. Baskets of paper flowers were fastened to the quarter poles.  On occasions those flowers were sprayed with perfume.  The interior of the tent was decorated with flags and pennants," continued Bandwagon, revealing the circus' magical quality at night. 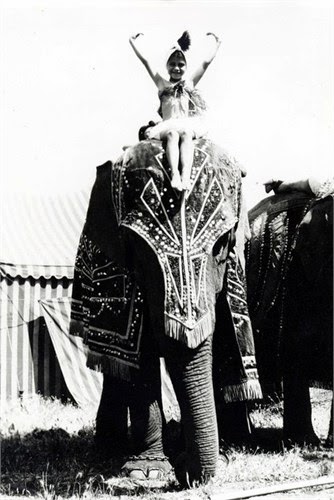 "At first, illumination come from gasoline lights, later it was electricity. Over the tent was strung a row of colored lights. Before each performance the band gave an outside concert."

The circus shows of the time "wildcatted."  They did not announce their visit in advance, instead distributing handbills as they paraded through town on arrival.  The circus parade was the means of advertising they were in town, creating excitement with a hint of the performers, musicians and animals that circus-goers would see at the show.  They stayed in the area as long as there was business. 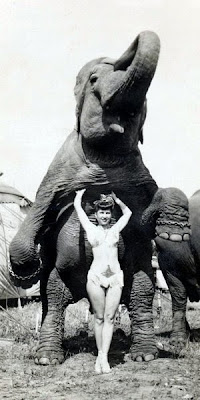 In the unincorporated area of Talbert where the Escalante Circus put up their big tent, it's likely there were no fees.  After incorporation in 1909, Huntington Beach began charging a $20 fee per day for circuses to camp on city land, pushing the circus to County land.

Conditions weren't always easy.  The Escalante Brothers Circus' agent, Lee Teller, wrote to Billboard in 1921 that he had just "returned from Mexico and Arizona, and that business across the line as far as Mazatlan was just fair."

"Conditions are none too good for shows, he says," describing the Escalante family's experience touring Mexico the year following the assassination of revolutionary leader Pancho Villa. "Money is scarce and the national currency only one-half value of this country."

"In Nogales, the advance men of the Howe show were welcome visitors," continued Teller, "The Escalante troupers visited the Howe show at Yuma. In Coachella, the Escalante show ran into a wind storm, with a ninety-mile gale and the sun invisible for three days on account of the sand." 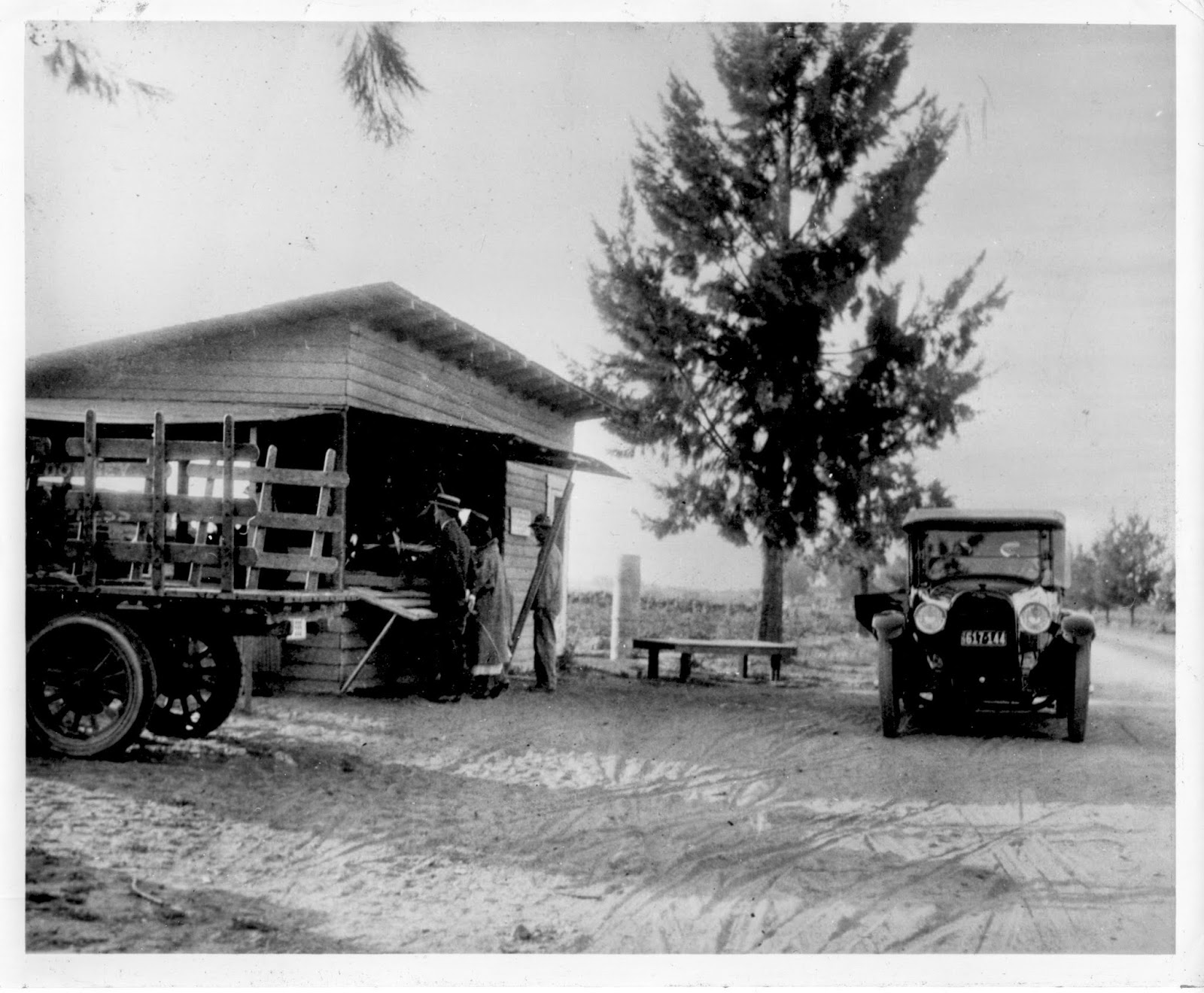 LEFT: Walter Knott's first berry stand along Highway 39 in Buena Park, circa 1920, around the time the Escalante Circus was making a tour of Mexico and Arizona. (Photo, City of Huntington Beach archives) 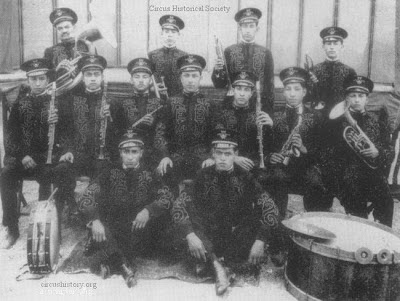 RIGHT: The Escalante Circus Band, led by Jesus Mendoza, was part of the family's winning formula, along with a good tent and bright lights, according to Mariano Escalante.  (Photo, circushistory.org) 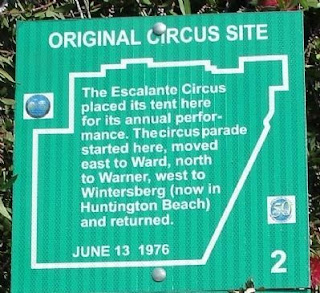 The Escalante Circus and others continued through the Great Depression, until municipal fees and regulations made it more difficult to be profitable.  However, like those in Wintersburg, the Escalante family made a success of their life in California and their descendants continue to live here today.

LEFT: The historical marker at the intersection of Talbert Avenue and Bushard Street in present-day Fountain Valley notes the circus parade went to Wintersburg.*  One of the first ordinances passed when Huntington Beach incorporated in 1909 included a fee of $20 per day for anyone operating a circus.  In unincorporated Orange County, the Talbert camp site was cheaper for a traveling circus. 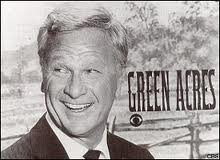 Prior to World War II, and before his film career, Albert had toured Mexico as a clown and high-wire artist with the Escalante Brothers Circus. His official biographies state he secretly worked for U.S. Army intelligence, reportedly photographing German U-boats in Mexican harbors.

RIGHT: Actor Eddie Albert got his acting break with the Escalante Brothers Circus, prior to World War II. 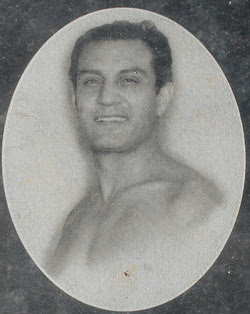 Henry "Blackie" Escalante, the grandson of Circus founder Mariano Escalante, performed with the circus as an aerialist.  The Los Angeles Times remembered in his 2002 obituary that, "like his grandfather, father and uncles, Henry Escalante mastered the trapeze and 'flew' with the family circus and others."

The turn of the Mexican Revolution that brought the Escalante Brothers Circus into California in a prior generation, led to a career in entertainment.  Blackie Escalante worked for more than 40 years as an actor and stuntman, including doubling for Johnny Weissmuller in the Tarzan films.   His work also included Creature from the Black Lagoon (1954), in which he played Chico, one of the boat crewmen,  stunt work on The Conqueror (1956), The Ten Commandments (1956) and Paint Your Wagon (1969).

Beginning in the 1960s, Escalante appeared in episodes of The Man from U.N.C.L.E., The Girl From U.N.C.L.E., Mission: Impossible and Hart to Hart. His final TV appearance was in an 1983 episode of The Fall Guy.

The Escalante Circus is reported to have toured from the 1910s to the 1950s.  By the mid to late 1940s, the small circuses that once brought excitement to rural California began to dwindle in number.  Although, the public still wanted to see them. 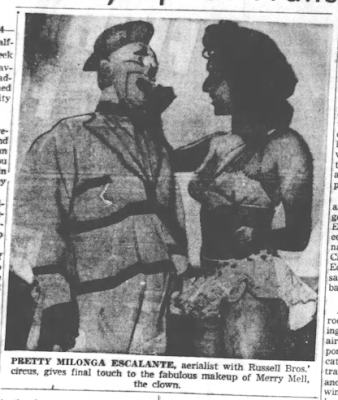 RIGHT: Milonga Escalante is shown touching up the makeup of circus clown, Merry Mell, in a Santa Ana Register feature highlighting the "hundreds of people and animals" to be seen in the Russell Brothers circus in Santa Ana, April 28 to 29, 1942. (Santa Ana Register, April 24, 1942)

At the end of April, 1942,--as Orange County's Japanese Americans were leaving California for forced World War II incarceration--the Seven Skyrocketing Escalantes joined the Russell Brothers' three-ring circus at a two-day show in Santa Ana.  They were described by the Santa Ana Register as "exemplifying the poetry of motion in the air."

The public wanted to see them again.  A December 11, 1943 issue of Billboard reports, "The Escalante Circus, which has not been on road (in the U.S.) since 1938, opened November 4 for a six-day run in East Los Angeles..."

The Escalante Brothers Circus also performed that year in Orange County,  "at capacity" in Santa Ana for nine days and on to Anaheim and La Habra, before heading south.

"Their big top was a 100-foot roundtop," reported Billboard, noting the Escalante Circus included an eight-piece band. "Business here was big and on several days many were turned away."

As the Los Angeles Herald affirmed in September, 1910, "there is no real, red-blooded man but feels the thrill of merriment when he hears the circus bands and gets a glimpse of the parade...You cannot escape the fever."

*Editor's note: The historical marker for the Escalante Circus site is at 33° 42.093′ N, 117° 57.75′ W, in Fountain Valley, California, at the intersection of Talbert Avenue and Bushard Street, on the right when traveling east on Talbert Avenue.

All rights reserved. No part of the Historic Wintersburg blog may be reproduced or duplicated without prior permission from the author and publisher, M. Adams Urashima.
Posted by Surf City Writer at 8:37 PM

FREE PHONE APP: FIND THE HISTORY AROUND YOU