Wintersburg and the birth of a County

Over the past year, Historic Wintersburg has highlighted some of the notable figures associated with the Furuta farm and the Wintersburg Japanese Presbyterian Mission and Church complex.  When learning about the history and stories of Wintersburg Village, we repeatedly get the response, "I had no idea!"  A rich history was about to slip through our fingers.

As we start the New Year, Historic Wintersburg reviews the 2012 stories of some of the remarkable people associated with this small patch of land in the former peatlands. 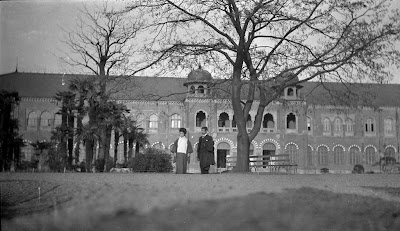 Yukiko Yajima Furuta and Reverend Junzo Nakamura, at the time of Yukiko's marriage to Charles Furuta in 1912. (Photo courtesy of the Furuta family) © All rights reserved.

CHARLES MITSUJI and YUKIKO FURUTA
The original owners of the extant Furuta farm--purchased between 1904 and 1909--one of the two Japanese-owned properties in present-day Huntington Beach prior to California's Alien Land Law of 1913 prohibiting property ownership by Japanese.

The Furutas were one of Wintersburg’s three goldfish farmers.  They donated land to the Wintersburg Japanese Presbyterian Mission.  Charles Furuta, who arrived in the United States in 1900, was president of the Smeltzer Japanese Association, which met in Wintersburg at the Asari Market.  He was among the first Japanese taken by the FBI, due to his involvement with the Church and the Association.  The Furuta family was interned at the Poston Arizona Relocation Center. 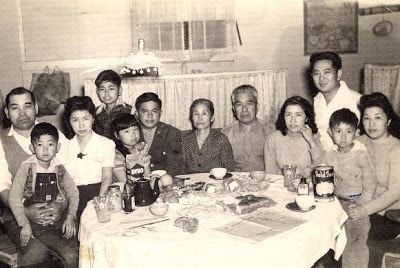 Members of the Masuda family at the Gila River Relocation Camp in Arizona.  Kazuo Masuda can be seen at the center of the photograph in his Army uniform.

MASUDA FAMILY
The entire Masuda family—farmers in Talbert—were congregants of the Wintersburg Japanese Presbyterian Mission.  Four of the Masuda brothers served in the U.S. military.  On the night of Dec. 7, 1941--while Kazuo Masuda was stationed at Ft. Ord, California, beginning his Army training--his father, Gensuke, was taken from his farm in Talbert to the Orange County jail, then to Fort Missoula, Montana.  The family was evacuated to the Jerome Relocation Center in Drew and Chicot counties, Arkansas.  After Gensuke was released from Fort Missoula, the Masudas were sent to the Gila River Relocation Center in Arizona in 1944, until 1945.  While the family was interned, Kazuo Masuda was killed in action in Italy.

Mary Masuda was granted leave from the Gila River camp to travel to Orange County and check on the family farm in Talbert, before the family returned home in 1945.   Upon arrival in Orange County, Mary was threatened by men claiming association with the Native Sons of the Golden West.  Hearing of the incident,  General Joseph "Vinegar Joe" Stillwell arranged a personal honor.  On Dec. 9, 1945, on the front porch of their farmhouse in Talbert, Gen. Stillwell—along with then Captain Ronald Reagan—presented Mary Masuda with the Distinguished Service Cross in honor of her brother, SSgt. Kazuo Masuda.

Kazuo and Masuo Masuda were nominated in 2011 for the Congressional Medal of Honor.  The Masuda family was specifically remembered by President Ronald Reagan when he signed the Civil Liberties Act of 1988.

Read more about the Masuda family at http://historicwintersburg.blogspot.com/2012/06/masudas-national-civil-liberties-icons.html 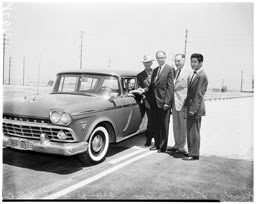 JAMES KANNO
James Kanno became the first mayor of Fountain Valley and the first Japanese American mayor on the continental United States in 1957.   James explained during his 1971 oral history interview, "the two questions that were asked on the ballot: 1. Do you want to form a city, yes or no? 2. If so, who would you want as councilmen for the city? There were nine people running for the five council positions. I don't know what happened, but I ended up with the most votes."

The Kanno family were congregants of the Wintersburg Japanese Presbyterian Mission and Shuji Kanno, James Kanno’s father, taught at the affiliated language school in Costa Mesa on land bequeathed as a legacy by Fannie Bixby Spencer.  Due to his involvement at the language school, Shuji Kanno was among the first Japanese taken by the FBI and was incarcerated at the Department of Justice Lordsburg New Mexico detention center.  The entire Kanno family was interned at the Poston Arizona Relocation Center.

Read more about the Kanno family at http://historicwintersburg.blogspot.com/2012/05/kannos-from-internment-to-creation-of.html 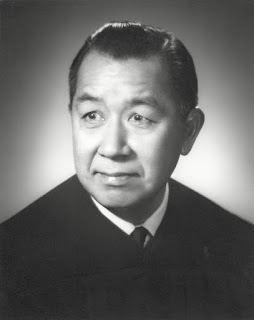 The Hisamatsu Tamura Elementary School in Fountain Valley is named after Justice Tamura’s father, a Japanese pioneer who was instrumental in organizing one of the first schools in Talbert (Fountain Valley).  Justice Tamura was interned at the Granada War Relocation Center (also known as Camp Amache, in Colorado), before attending Harvard University in 1943 and enlisting in the U.S. Army in 1945. 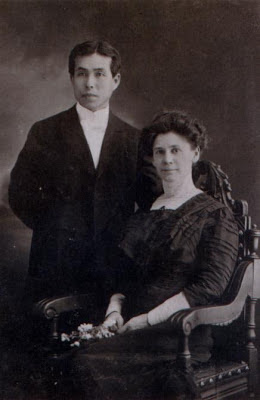 Reverend Joseph K. Inazawa and his wife, the former Miss Kate Alice Goodman, circa 1912.  Reverend Inazawa served as the first clergy for the Wintersburg Japanese Presbyterian Mission in 1910, and was described as a "man of highly pleasing personality."  Goodman was described as "possest of a delightful sense of humor." (Photograph courtesy of Wintersburg Presbyterian Church) © All rights reserved.

He and his new bride, Kate Alice Goodwin, made international headlines--from as far away as New Zealand--when they became engaged in 1909 and again when they married in 1910.   The couple famously eloped to New Mexico, because California banned interracial marriage between 1850 to 1948.

Their story is documented in oral histories and also in front-page news clippings from 1909 and 1910, as well as the 1913 article by Neeta Marquis for The Independent, Interracial Amity in Los Angeles, Personal Observations on the Life of the Japanese in Los Angeles. 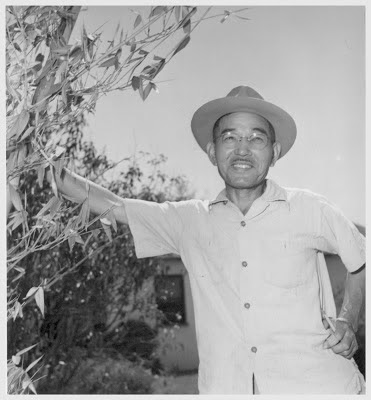 Henry Kiyomi Akiyama at the Pacific Goldfish Farm, post WWII in 1945.  The Akiyamas "are formerly of Poston and report no difficulties in disposing of all goldfish they are able to deliver to the market." (Photo, UC Berkeley Bancroft Library)

HENRY KIYOMI AKIYAMA
One of Wintersburg’s three goldfish farmers, who later opened the Pacific Goldfish Farm—billed as the “largest goldfish farm in the world.”  From humble beginnings in Wintersburg, Akiyama became one of Orange County’s wealthiest residents.

Henry Kiyomi Akiyama also was one of Charles Mitsuji Furuta's best friends.  They worked together on the Cole Ranch off Gothard Avenue in Wintersburg.  Charles and his wife, Yukiko, had arranged the marriage of Akiyama to Yukiko's sister, Masuko, and the newlyweds lived with the Furutas for a while at the Cole Ranch and at the Furuta farm.

AMONG THE STORIES PLANNED FOR 2013 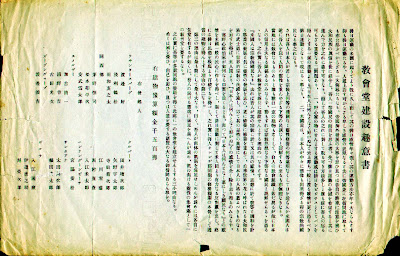 TSURUMATSU "T.M." ASARI
Signatory on Wintersburg Japanese Presbyterian Mission 1904 “Prospectus” document which was used to raise funds for the 1909 Mission construction.  "T.M." Asari is noted in a 1982 oral history with Clarence Nishizu as the first Japanese to arrive in Orange County.

Asari was one of two Japanese land owners in Huntington Beach prior to the Alien Land Law of 1913 (the other being Charles Mitsuji Furuta).  Asari owned the Asari Market and a goldfish farm on Wintersburg Avenue.  He initiated the Smeltzer Japanese Association, which met on the second floor of his market.  Asari also organized the Smeltzer Flying Company. 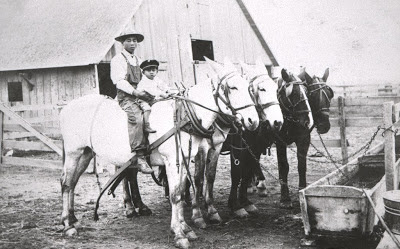 Yasumatsu Miyawaki's son, Leonard, being given a horseback ride by Y. Tanaka in Wintersburg, circa 1914. (Photo courtesy of California State University - Fullerton Center for Oral and Public History, PJA 029) © All rights reserved. 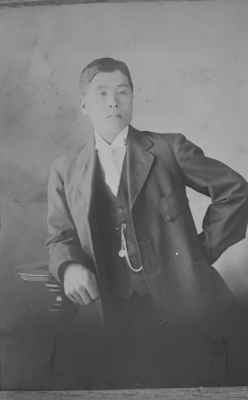 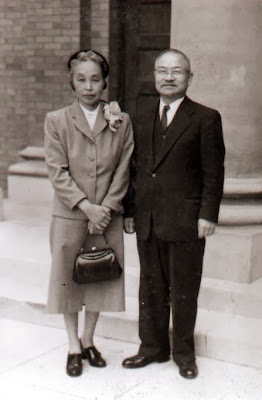 Reverend Sohei Kowta and his wife, Riyo, lived in the manse with their children at Historic Wintersburg from 1938 to 1942. (Photo courtesy of Wintersburg Presbyterian Church) © All rights reserved.

REVEREND SOHEI KOWTA
Reverend Sohei Kowta was the pastor at the Wintersburg Japanese Presbyterian Church from 1938 to 1942.  His sermon on the "last Sunday" before internment is a powerful message of endurance and hope.

Reverend Kowta continued to bring people together both while he and his family were interned in the Poston Arizona Relocation Center and afterward, when the family returned to Little Tokyo, Los Angeles, California.  Historic Wintersburg is working with Reverend Kowta's descendents to capture the Kowta family histories.

ETSUKO FURUTA
The daughter of Charles Mitsuji and Yukiko Furuta, Etsuko was born on the Furuta farm in Wintersburg.  Photographic images reveal a happy childhood on the Furuta farm and at the beaches of Huntington Beach.  Today, Etsuko lives in Northern California, is in her 90s, and provided an oral history for Historic Wintersburg.

As we work to preserve the historic Furuta farm and Wintersburg Japanese Presbyterian Mission complex, more of the history is uncovered and we learn the significance of the Wintersburg Village community for Huntington Beach, Orange County and the country.

All rights reserved.  No part of the Historic Wintersburg blog may be reproduced or duplicated without prior written permission from the author and publisher, M. Adams Urashima.
Posted by Surf City Writer at 9:24 PM