"Full of hope for a new life" in Wintersburg 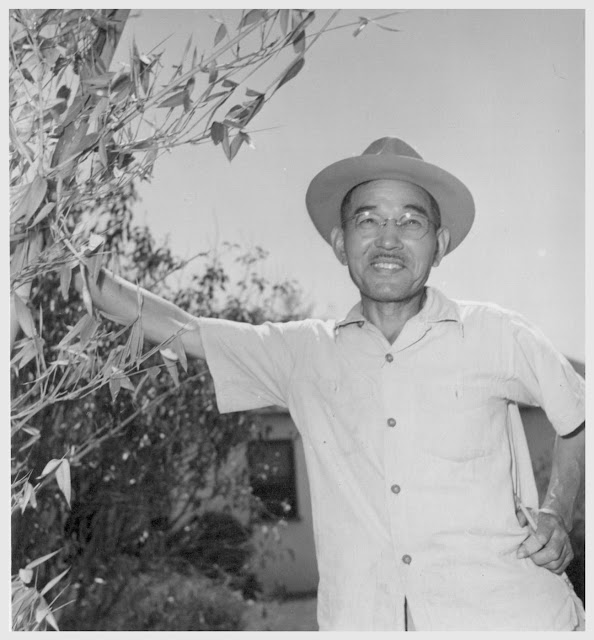 ABOVE: Henry Kiyomi Akiyama at the Pacific Goldfish Farm, post WWII in 1945.  The Akiyamas "are formerly of Poston and report no difficulties in disposing of all goldfish they are able to deliver to the market." (Photo, UC Berkeley Bancroft Library) © ALL RIGHTS RESERVED

Henry Kiyomi Akiyama was one of Charles Mitsuji Furuta's best friends.  They worked together on the Cole Ranch off Gothard Avenue in Wintersburg (see Cole Ranch and the Universe Effigy, http://historicwintersburg.blogspot.com/2012/02/cole-ranch-and-universe-effigy.html).  Charles and his wife, Yukiko, had arranged the marriage of Akiyama to Yukiko's sister, Masuko, and the newlyweds had lived with the Furutas for a while.  And, both tried goldfish farming (see Goldfish on Wintersburg Avenue, Feb. 11 2012 post).

While Charles Furuta constructed small goldfish and lilly ponds on his property at Wintersburg (Warner) Avenue and Nichols Lane---purchased before the Alien Land Act of 1913---Akiyama first could only lease land.

Akiyama later was able to construct a large hatchery on 40 acres in Westminster, at the site of the present-day Westminster Mall.  The Akiyama hatchery was so successful, others followed the model and Westminster began billing itself as the "Goldfish Capital of the World," even putting it on their post mark.

Akiyama was born in 1888 into a family of nine.  He left Japan as a young man to avoid being drafted into the Imperial Army, arriving first in Vancouver, Canada.  He worked for six months at a sawmill in the Seattle area before making his way to his original destination: Orange County.  On the ship to North America, he wore the western-style suit he bought for the trip in Tokyo and carried little else in the way of belongings.  Akiyama was "was full of hope for a new life in America."

He had heard about Orange County from a relative who lived in Wintersburg, Tsuneji Chino.  Chino was operating an agricultural labor camp and Akiyama wanted to be in farming.  Chino's Wintersburg labor camp was in the area of present-day Springdale Avenue.

"At that time, each landlord provided housing for the laborers; however, there was no bed provided. The workers just spread straw on the dirt floor and used a blanket to sleep on. There were about thirty people living in one house...the landlords provided poor housing," remembered Akiyama.  "After harvesting, each laborer rolled his own blanket and carried it away...for the labor, the fee was fifteen cents an hour and they worked ten hours a day. They had to work on Saturdays, too. Only Sundays were off."

Ninety-four at the time of his oral history interview, Akiyama recalls he "didn't mind so much hard work here, and he worked very hard. And his Caucasian employer (Cole) liked him and appreciated his hard work, so he was pretty successful."  Akiyama had worked consistently for three local farmers, George Crane, Ray Moore, and M. C. Cole.

"He graduated from Cambridge University. He spoke English very well. He started the missionary work among the Japanese (in 1904)," recalled Akiyama.  Rev. Terasawa had taken Charles Furuta and his new wife, Yukiko, under his mentorship and later performed the marriage ceremony for Akiyama and his wife.

Akiyama said many Japanese immigrants began learning about Christianity in Japan.  "Young people especially were interested in Christianity. There was an association called Rikkokai in Tokyo...They taught people going to the United States some facts about American life. So people had some knowledge of Christianity before they came to this country. And after coming here to Orange County, young laborers in the camp attended this church in Wintersburg."

The Wintersburg Japanese Presbyterian Mission began meeting in a barn in Wintersburg in 1904 before the first mission building was built.

"...Reverend Terasawa organized a group in the barn which was on the same property as the house he was renting," explained Akiyama.  "He made this barn into a gathering place for the Japanese, and on Saturdays and Sundays the young people gathered here since there was nowhere else to socialize."

Akiyama started farming on the M.C. Cole Ranch on a crop-rent contract first under Chino's labor camp, with C.M. Furuta.

Furuta went to work his own land at Wintersburg (Warner) Avenue and Nichols Lane, while Cole invited Akiyama to stay and live on his ranch.

The Cole family began selling part of their Wintersburg land as oil production increased.  At that time, Akiyama had begun trying his hand at goldfish.  He "made a little pond and started to have goldfish. He found that they multiplied a lot, that so many goldfish were born in a pond. So he thought goldfish farming might be a good business."

By 1927, Akiyama was able to lease 40 acres and construct a 20-acre goldfish pond.  Since he could not buy the land, Akiyama entered a deal with M.C. Cole's grandson; Akiyama would rent the land from Cole, for ten to twenty years--and pay off the land price.  The hatchery was later put in Akiyama's son Joe's name, since Joe was a U.S. citizen.

Akiyama hired a Caucasian manager and other Caucasian employees.  By 1938, he had sixteen employees and was able to buy 65 acres in Buena Park (also under his son Joe's name).

While his friend, Charles Furuta, was taken immediately by the FBI after the attack on Pearl Harbor, Akiyama did not have to evacuate until May 1942.  He's not sure why, but thinks it may have been because he had Caucasian employees or that he was not active in any of the Japanese associations.  He was 54 years old and had lived in the U.S. for over 30 years.

Akiyama's employees tried to keep the business running after Akiyama was evacuated to the Poston, Arizona Relocation Camp.   "...this bookkeeper told him that during Mr. Akiyama's stay in the relocation camp, the government tried to find out any wrongdoings in his business," relayed Akiyama during his oral history interview.

"But this bookkeeper told the government that Mr. Akiyama turned over all rights to manage the business to this manager and himself. He told the officers, 'Don't call Mr. Akiyama at the camp. Ask me any questions you have about the business.' And the government couldn't find any wrongdoing in his business." Akiyama remembers his Caucasian employees being on the receiving end of discrimination because they had been hired by a Japanese American.

Akiyama lived in Block 12 at Poston, along with the Furuta family.  He grew koi, using water from the Colorado River.  And, he recalls going to a Native American reservation to get ironwood, which he carved into a chess set.

When he returned from internment in 1945, the goldfish ponds were weedy and filled with frogs.  Akiyama and his son began the process of rebuilding.  The Pacific Goldfish Farm, an idea that originated in Wintersburg, put Westminster on the goldfish and koi aficionado map.

Henry Kiyomi Akiyama was one hundred years old when he died, eighty-one years after he arrived in Wintersburg.  His forty-acre hatchery continued until the 405 freeway and Westminster Mall swallowed up the land. But by then, the Akiyamas were one of Orange County's success stories. 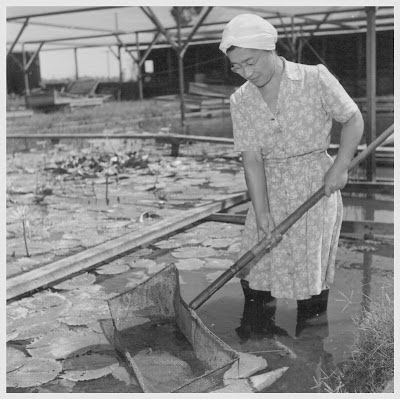 © All rights reserved.  No part of the Historic Wintersburg blog may be reproduced or duplicated without prior written permission from the author and publisher, M. Adams Urashima.
Posted by Surf City Writer at 3:46 PM