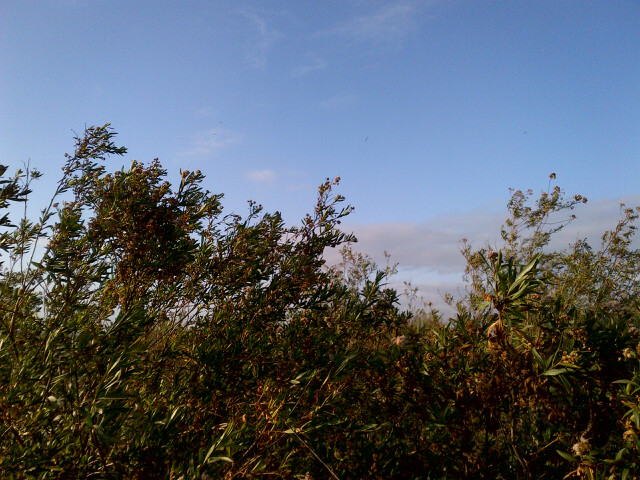 Wintersburg was not a completely sleepy little village of farms and churches.  It was, after all, a frontier.  The latter part of the 19th Century and early part of the 20th Century saw the convergence of a truly unique assortment of people, destined to shape Southern California into a place unlike any other.

Described as a "land filled with tules", "the willows," and the "peatlands," the Wintersburg area had been home to the Tongva for at least 9,000 years.  The peatlands and sea provided everything that was needed: game, shellfish, and warm sunny days.

By the mid 1800s,  more white settlers were moving in to buy land from the Spanish ranchos.  A descendant of Orange County's Ross family describes the native Californians visiting her grandmother to share in the coffee and freshly baked biscuits.  "They never came empty handed," she recalls.  "Sometimes they would bring a young rabbit or a few quail and sometimes a wild duck." (Pioneer memories of the Santa Ana Valley, Vol. III)

Horse thieves
The ranchos made money from the sale of their land, however, not all Spanish and Mexican ranchers were happy to see the new pioneers, often turning out their cattle to graze on farming land.  And, horse thieving was a problem.

The Ross family kept their horses "under lock and key so that they would have a mount when they had to go after horse thieves."  The settlers soon discovered that an enterprising local, Juan Diaz, was actually running a horse thieving ring and collecting rewards for returning horses he had stolen.  They brought him back to the livery in Santa Ana, and---in Western justice style--- "hung him by the rafters until he confessed..."

Hidden in the tules
Farmers found they had to deal with more than cattle encroaching on their land.   In the December 18, 1894 edition, the Los Angeles Herald Examiner reported one Wintersburg farmer's plow unearthed a skeleton.

"...From what can be learned it is probable that the discovery will lead to the unearthing of a murder of years ago," reported the Examiner.  "The skeleton is in fair state of preservation, and is that of a comparatively young man.  One man who claims to have seen it states...that the bones belonged to a man that was murdered.  A few years ago, several people who had located on the ranch disappeared and no trace of them was ever found."  The Examiner---in typical journalistic fashion of its time---concluded the article by stating "the list of these persons cannot be found tonight."

Oilmen (and outlaws)
It was about this time that we begin hearing about oil man Gray Garrett Southern.  Southern lived on the outskirts of Wintersburg near the Buck Ranch (vicinity of Edwards Street and Varsity Drive in present-day Huntington Beach).  The April 9, 1896 San Francisco Call reports Southern was found guilty for the murder of Mariano Cuero in the midst of a "drunken brawl" in October, 1894.  The Call previously reported Southern had been charged, held without bail, and taken by Sherriff Nichols to Los Angeles for safekeeping. 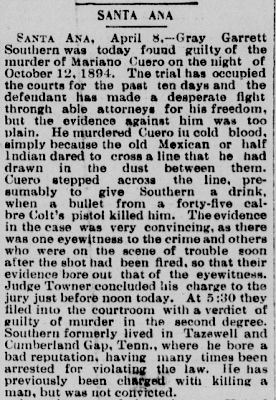 Southern was sentenced to serve 12 years in the penitentiary, but managed to get a new trial after seven months and the case was dismissed.  By November 1908, he is back in trouble with the law.  The Los Angeles Herald Examiner reported Southern was charged with "shooting at Constable Langto of Wintersburg, with intent to kill."  Southern's wife, Nancy,  reported he "fired at her with a revolver and chased her to the house of a neighbor, half a mile distant."  Sherman Buck and his sister-in-law Mrs. Charles Buck responded to the call for help.

The Examiner continued, "When Constable Langto and his party arrived at Southern's home (he) came out of the house armed with a shotgun and revolver...charging Langto and Buck with interfering in his private affairs, threatened to shoot Buck.  Langto attempted to pacify Southern, when the latter suddenly turned the gun in Langto's direction and fired at him point blank, the charge passing so close to Langto's head as partially to deafen him.  Buck sprang upon Southern, and, with Langto's assistance, Southern was overpowered, disarmed and taken to jail."

The Examiner also reported Southern's wife, Nancy, filed for divorce after the attempted murder.  They apparently worked things out, as a circa 1920s Orange County directory lists them together with a post office box on Wintersburg Road, where Southern owned land.

Tycoons
As if this sort of behavior wasn't enough for farmers to contend with, in come the railroad tycoons, land barons and wealthy duck hunters.  Gun clubs began to sprout in the peatlands, starting a royal battle when the Bolsa Chica Gun Club dammed up the tidal flow into the Bolsa Chica wetlands.  There are reports of farmers (allegedly) sabotaging dredging equipment and filing legal complaints that the dams were a violation of maritime law.  The farmers repeatedly lost this battle (until the tidal flow was re-opened one hundred years later).  However, the gun clubs found out now and then they were not above the law. 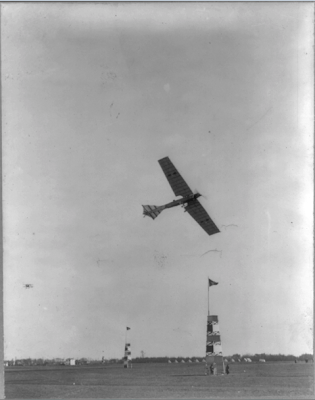 Left: Hubert Latham in Antoinette, circa 1911. This image may be from the air show at Dominguez air field in Los Angeles County. Photo, Library of Congress

The December 23, 1910, Los Angeles Herald Examiner reported "the first duck brought down by the aviator was brought to Los Angeles by Count Von Schmidt and will be stuffed and presented to Latham as a trophy for making the first aviation hunt on record."  Everyone congratulated each other and then most likely retired to the club to eat roast duck.

Two days later, the San Francisco Call reported Latham's stunt would make California "the first state in the union and the first government in the world to prohibit the hunting of wild game from air ships if the state fish and game commission has its way."  The commission stated Latham frightened "thousands of ducks and geese so badly that they have not yet returned to the marsh."

The Fish and Game Commission further stated they feared others would try to copy Latham.  "Within the year it might become the fashion to hunt ducks and geese in aeroplanes over all the state."  Awkwardly, M.J. Connell, reported by the Los Angeles Herald Examiner to be the president of the Commission, also was a member of the Bolsa Chica Gun Club.

Preachers
Into the fray entered the Presbyterian and Methodist Evangelical preachers, who began spreading their message of faith and temperance to farmers and field hands in the peatlands in 1902.  The same tules that served as an out-of-the-way place to stretch or break the law, became a "gospel swamp" dotted with tent revivals, missions and churches. 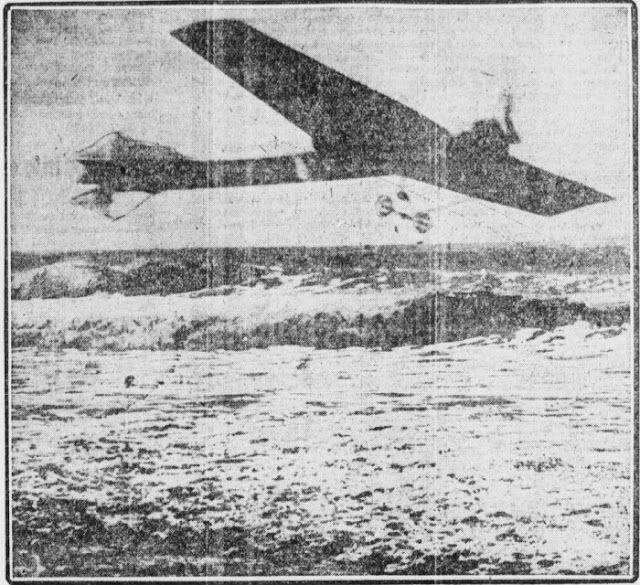 All rights reserved.  No part of the Historic Wintersburg blog may be reproduced or duplicated without prior written permission from the author and publisher, M. Adams Urashima.
Posted by Surf City Writer at 5:41 PM