Orange County author and educator Georgia Day Robertson: Moved to write by her time in Poston 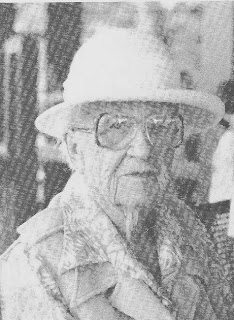 LEFT: Georgia Day Robertson, was in her nineties and living in Costa Mesa at the time she was located by California State University, Fullerton's Oral History Program.  She was 100 years old at the time her manuscript was published. (Photo, Poston Internment Camp Biographies)

Georgia Day Robertson was a woman ahead of her time.  Her childhood was spent in rural Iowa, where the expectation might have been for her to become a farmer's wife.  Instead, she pursued a Bachelor of Science degree--working her way through school--bobbed her hair before it was fashionable, and embarked on a mission to China to teach at a boarding school for girls.  It was there she met her husband, John A.T. Robertson, continuing to work in China until conflicts in Manchuria forced them to leave.

Teaching, selling eggs and short stories
"When we came to California, we lived in Midway City... it was in August, after Roosevelt had gotten inaugurated, in August of 1933," remembered Robertson.  "People were still talking about the earthquake, you know; it had happened in March. Then the next eight years—from 1933 to 1941—by selling short stories and teaching at a Santa Ana... evening high school and raising chickens and selling eggs, I was able to make enough money to pay the rent and keep food on the table for all of us, and buy a bit of meat for the cat. I bought two gallons of gas a week to drive to market in Santa Ana." 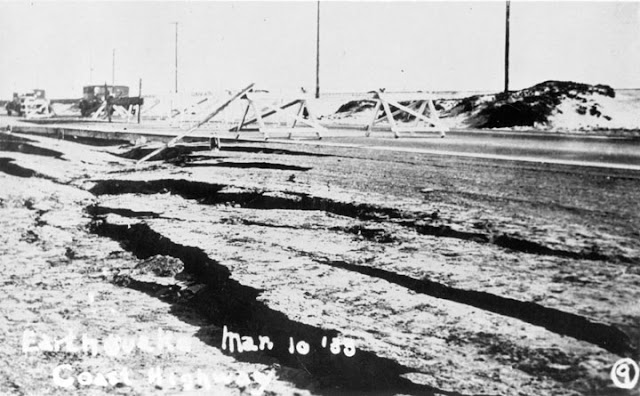 Robertson recalls Midway City had a population of about a thousand people.  "When they opened the oil fields in Huntington Beach... they had to move a lot of houses out.  So they moved them to Midway City, and that's what started Midway City."

Memories of Orange County's Japanese
Robertson continued raising her boys as a single parent in Midway City and by 1941 was pursuing a doctorate degree at USC.  She remembers the local Japanese American community.

"They were ranchers (farmers) and they had their little wayside road stands, where we went and bought vegetables," described Robertson.  "...My son Dave's two best friends were Nisei...and we had very close contact with them. There was a Nisei family that lived right in Midway City that had a fish farm, goldfish for aquariums. They were nice people, lovely people."

By 1942, Robertson was looking for another teaching job at the California Teacher Association's Placement Bureau in Los Angeles.  "Would you be willing to teach Japanese?" she was asked.  Robertson replied, "Why not?" And, she was told about the Poston, Arizona Relocation Center. 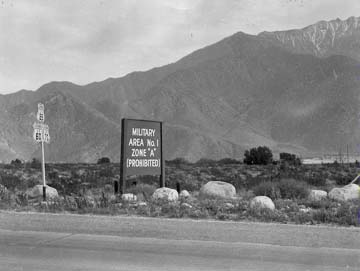 ABOVE: Signpost to Poston, Arizona Relocation Center.  The Colorado River Indian Reservation Tribal Council opposed the use of their land for a relocation center, but were overruled by the Army and the Bureau of Indian Affairs. Most of Orange County's Japanese community were interned at Poston.  (Photo, National Archives)

Life at Poston
Robertson's first impression of Poston was bleak.  "Bulldozers had scraped off mesquite, everything off the desert, before the barracks were built. When I went there, there was nothing but these black tar paper buildings...When I saw these Issei there sitting with idle hands, just sitting, sitting, sitting and looking down at the ground. Oh, the things I saw! It didn't take long for me to decide that this was a shameful thing, a tragedy, just a tragedy."

Robertson became head of the mathematics department for all three high schools at Poston (camps I, II, and III).   The internees at Poston included families from Huntington Beach and Wintersburg, as well as most of Orange County's Japanese community.  Her teachers included Nisei (American born citizens), who she ended up counseling.  It was during this time, Robertson heard the personal stories of internees.

"At least I could listen to them. They would tell their stories," Robertson explains.  "They were having a hard time handling the situation, because they knew their fathers had never done anything wrong, and there was no reason why they had to put them in prison camps. They just couldn't take it, you know."

Robertson also describes the teaching conditions at Poston's schools.  "... I'll never forget that first morning when I went into the classroom—bare barracks and no seats even, and a little table for the teacher and a little chair and, back up on the wall, her own little blackboard. And that's all there was in the room. No textbooks, no seats. The kids came in carrying their little stools their fathers had made for them out of mesquite."

A tone of perserverance
Like many of the teachers who visited or worked at Poston (see Remembering Ma Shep, February 14, 2012 post, http://historicwintersburg.blogspot.com/2012/02/remembering-ma-shep-on-first-floor-of.html), Robertson acknowledged what was happening to her students and set a tone of perseverance that would be remembered.

"I won't say I know how you feel, because that would be impossible, it wouldn't be true," Robertson told her students on the first day.  "I can't know how you feel. But I have a good idea. You're here and there's nothing you can do about it, and nothing I can do about it, so there's no reason to punish yourselves by not getting an education while you're here. So let's get down to business."

Poston closed in November 1945.  Robertson's experiences at Poston left a deep impression on her.  The blog Poston Internment Camp Biographies remembers Robertson, "It was the postwar return to her native Iowa and the discovery that many Midwesterners had never heard of or refused to believe in the reality of the Evacuation that impelled her to put pen to paper in the service of civil liberties and social justice."

Moved to write
With her Poston experiences fresh in her mind, Robertson set about writing a novel, Harvest of Hate.  It would be forty years before the novel was published. 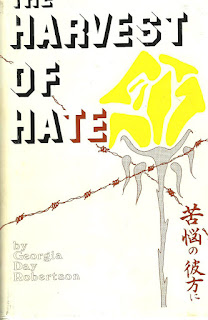 In 1972, Hansen had become aware of "a cache of documents in the university library's Special Collections" relating to the evacuation of Japanese Americans during World War II.  Most of the material had been donated by a "former teacher at Poston."  Among the items was "a large, boxed manuscript of an unpublished historical novel by the donor carrying the title 'Harvest of Hate.' "

For six years, attempts to find Robertson proved futile.  By chance in 1978, a letter arrived from Robertson's niece inquiring about the manuscript.

Robertson's novel, Harvest of Hate, was published by CSUF in 1986, commemorating her 100th birthday.  The novel captures the shock, despair, and confusion felt by Southern California's Japanese Americans following Pearl Harbor, the loss of property, life in internment, and the turmoil of returning at the end of the war.

Robertson's novel relays the debates among Japanese Issei and Nissei about the prospect of internment.

"I just can't believe our government would force us out of our homes," states one of the book's Nisei characters, confident that U.S. citizenship offered protection.  "...Men who are working on ranches raising food the Army needs so badly, they couldn't be spared, and women and little children and babies and harmless, crippled old men... a lot of us are doing work important to the war effort, and I think the thing for us to do is go right on working..."

In one of the book's forewords, Orange County resident and principal founder of the Japanese American Council of the Bowers Museum Foundation of Orange County, Hiroshi Kamei recalls, "I first met Mrs. Robertson in 1944 in the second semester of my junior year at Poston...I remember her then as a stately, proud woman with silver-white hair, who made a tremendous impression on me..."

Kamei writes he is "forever grateful" to Robertson, who made a personal appeal to her alma mater, Iowa State College, enabling Kamei to pursue a mathematics degree.

Robertson continued her contact with the local Japanese American community after the war.

"In the late 1940s, while I was away at college... my family ran a farm and roadside vegetable stand in Garden Grove..." recalls Kamei.  "Mrs. Robertson, by then having resumed her teaching career in Orange County, frequently stopped at my mother's stand to chat."  Kamei writes in his book foreword in 1986, "I can think of no greater (100th) birthday gift for her than the publication of her novel."

Georgia Day Robertson died on December 6, 1991 in Orange County at the age of 105 years.

Historic Wintersburg author's note:  While Harvest of Hate is out of print, copies can be found through rare and used book sellers, and online sources.  The Harvest of Hate, by Georgia Day Robertson. Edited by Arthur A. Hansen. Oral History Program California State University, Fullerton, 1986. ISBN: 0-930046-08-0 KBF

The oral history interview was conducted for the Japanese American Project of the CSUF Oral History Program.  The full oral history interview with Georgia Day Robertson can be viewed at http://content.cdlib.org/view?docId=ft0p30026h;NAAN=13030&chunk.id=d0e307&toc.id=&toc.depth=1&brand=calisphere&query=Japanese%20American%20Oral%20History%20Project&anchor.id=p35#X

All rights reserved.  No part of the Historic Wintersburg blog may be reproduced or duplicated without prior written permission from the author and publisher, M. Adams Urashima.
Posted by Surf City Writer at 1:40 PM