Voices from the past: The oral histories of Orange County's and Wintersburg's Japanese Americans 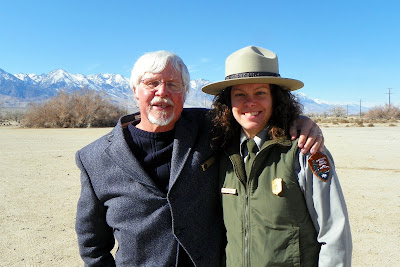 Arthur August Hansen is Emeritus Professor of History and Asian American Studies at California State University, Fullerton (CSUF).  He is the immediate past director of the CSUF Center for Oral and Public History (COPH) and the founding director of COPH’s Japanese American Oral History Project.  He currently serves as a historical consultant at the Japanese American National Museum, holding the position of senior historian between 2001 and 2005.

Over thirty years ago, Orange County's Bowers Museum recognized important local history would be lost without the creation of a Japanese American Council and a concerted effort to record the memories of the Japanese American community that played an integral part in the County's and State's development.

Could you please provide some background as to the origins and early development of the Honorable Stephen K. Tamura Orange County Japanese American Oral History Project?

In addition to spearheading a special event at the Bowers Museum on the evening of May 3, 1981, attended by 320 people and featuring an exhibition of photographs, documents, and artifacts acquired from the local Japanese American community, the History Committee laid the groundwork for an ambitious oral history project covering the community’s history.

The committee first invited representatives from the Oral History Program (renamed in 2003 as the Center for Oral and Public History) at CSUF—who in 1972 had begun a Japanese American Oral History Project anchored by an assortment of interviews with Orange County Nisei about their World War II West Coast exclusion and Interior West incarceration, including one with Fountain Valley’s Jim Kanno, the country’s first mainland mayor of Japanese ancestry—to conduct a couple of workshops explaining the procedures and value of oral historical methods in the reconstruction of a community’s past.  Next, the committee compiled an extensive list of Issei (immigrant-generation) and older Nisei (first U.S. citizen-generation) in the county to become project interviewees (or narrators).

By November 1982, the JAC History Committee, now co-chaired by Villa Park’s Carol Kawanami (the U.S. mainland’s first female mayor of Japanese descent) and I, began meeting on a monthly basis and drew up ambitious plans for a wide variety of historical undertakings, one of which was transacting a series of oral histories with longtime residents of Orange County’s Japanese American community, most especially those Issei and Nisei men and women that the founding History Committee co-chairs had identified as prospective narrators.  It was further decided that the oral histories be collectively designated as the Honorable Stephen K. Tamura Orange County Japanese American Oral History Project to honor Justice Tamura, who had passed away on April 22, 1982.  This decision was made in recognition of his rise from roots in the local Japanese American community to appointment in 1966 by California Gov. Pat Brown as the first Japanese American appellate judge in the continental United States.

A further boost for the fortunes of the oral history project came about during the spring and fall of 1983 when, under the resourceful and indefatigable leadership of two members of the History Committee, Dorothy Wing and Shi Nomura, the committee sponsored two photo days at the Bowers Museum.  These occasions turned up more than 500 photographs (which were copied and annotated and made the basis for a JAC photo-archive) and galvanized the historical energies of the entire JAC membership.  Moreover, many who showed up at the photo days with historical photographs documenting the historical experience of their family and geographical community agreed to serve as resource people to identify prospective interviewees for the oral history project and/or to themselves act as interviewees.

Of these fifteen interviews, how many were ones in which you served as the interviewer?

Five interviews, three of them with Issei (Henry Kiyomi Akiyama, Yukiko Furuta, and Reverend Kenji Kikuchi) and two of them with Nisei (Charles Ishii and Clarence Iwao Nishizu).

Did you conduct the Issei interviews with the assistance of a Japanese-speaking interpreter?

Yes.  One of the JAC members, Yasko Gamo, was a Japanese citizen whose residence in the United States extended over a quarter of a century.  She also was then employed as a Japanese-language instructor at several Orange County community colleges.  She agreed to assist me as a translator during the multiple interviewing sessions with Mr. Akiyama and Mrs. Furuta.

What about the interview with Reverend Kikuchi?

I did that interview in English, although Rev. Kikuchi’s wife, Yukiko Kikuchi, was in attendance at the interview and periodically translated my questions into Japanese for her husband.  Some years later, the transcript of the interview was translated into Japanese by a cadre of wives of Orange County-based businessmen from Japan.  These women, supervised by two of them who were especially fluent in English, Masako Hanada and Yukiko Sato, had been recruited to the project by Yasko Gama, a graduate from the University of California, Irvine (where her husband was a professor) with extensive family contacts in the county’s overseas Japanese business community.

In addition to acting as translators for the remaining four Issei interviews with Shizu Kamei, Maki Kanno, Hyotaro Kaneko, and Mine Yabuki Kaneko, Mrs. Hanada and Mrs. Sato oversaw the transcription, editing, proofreading, indexing, and typesetting work by their team of Japanese business spouses for all the project’s bilingual interviews and even some of the monolingual interviews.  Without the inspired and dedicated talents of these two remarkable women leaders—the first (Masako Hanada) a Japanese university graduate in the field of English literature and a published translator, the second (Yukiko Sato) a graduate from a Japanese university in econometrics with a master’s degree in linguistics from CSUF—the project would probably never have progressed beyond the preliminary stages of its development.

Aside from these overseas Japanese women and the Japanese American men who first lead the JAC and its History Committee, were there others who contributed to the success of the Project?

Yes indeed.  One of the goals of the project aside from collecting the oral history interviews was to bring together three Orange County groups who, historically, had not worked particularly closely with one another on community activities.  The first of these groups was the pre-World War II Japanese residents of Orange County; the second group consisted of Orange Countians of Japanese ancestry who made the county their home in the period after World War II; and the third group was comprised of members of the overseas Japanese community living and working in Orange County.

Was the Project featured in any public events?

There were two such affairs held that were exceptionally noteworthy.  First, on March 31, 1984, the JAC sponsored a major event: A Tribute to the Issei Pioneers of Orange County.  Held at the South County Plaza Hotel in Costa Mesa, 660 people turned out to honor the historical contribution of Orange County’s pioneer Japanese Americans, thirty-eight of whom were in attendance. With the notable southern California television newscaster Tricia Toyota and the distinguished third-generation Japanese American (Sansei) Orange County dentist Ernest Nagamatsu as co-emcees, this event succeeded both in focusing attention upon the heritage and achievements of the county’s Japanese American population and in raising more than $25,000 to support the costs of its historical endeavors, most especially the oral history project.

Two years later, on Nov. 22, 1986, another JAC event of considerable magnitude called the Nikkei or Japanese American Legacy of Orange County was held at the Emerald Hotel in Anaheim. As with the previous event in Costa Mesa, this one was also emceed by Tricia Toyota.

This event witnessed the presentation of three community-developed projects.  First and foremost was the presentation of the fifteen oral history volumes done with Issei and older Nisei members of the Orange County Japanese American community.  Second was the release of a published novel, The Harvest of Hate, an epic story of the World War II exclusion and detention experience of Japanese Americans written by a Caucasian woman from Orange County, Georgia Day Robertson.  As a mathematics teacher, Mrs. Robertson had accompanied nearly 2,000 Japanese Americans from Orange County to the Poston Relocation Center in southwestern Arizona.

Next:  Arthur A. Hansen talks about what was learned from the  Honorable Stephen K. Tamura Orange County Japanese American Oral History Project. The Wintersburg Japanese Presbyterian Mission (above) and Church buildings were listed as number one on the Bowers Museum JAC's Historic Building Survey for Orange County, released in 1986.

All rights reserved.  No part of the Historic Wintersburg blog may be reproduced or duplicated without prior written permission from the author and publisher, M. Adams Urashima.
Posted by Surf City Writer at 2:48 PM