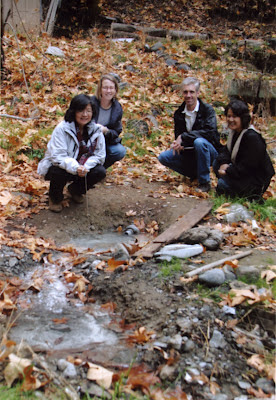 Laura Kitaji Domonguez-Yon, Donna Graves, Matt Bischoff and Jill Shiraki at Gilroy Yamato Hot Springs.  Listed on the National Register of Historic Places, the hot springs were purchased by Kyuzaburo Sakata in 1938.  The hot springs--now part of the Henry Coe State Park--served as a hostel for Nikkei returning from wartime incarceration and for decades after as a gathering spot for Japanese Americans throughout Northern California.   The property is now being rehabilitated to restore public access.

Nihonmachi sites of interest in Orange County include the Wintersburg Japanese Presbyterian Church complex, see http://www.californiajapantowns.org/orange.html      Donna Graves comments on the importance of the Wintersburg site in this interview for Historic Wintersburg.

What is the effort behind Preserving California's Japantowns?

This project started as a number of people involved with efforts to preserve the three remaining Japantowns of San Francisco, Los Angeles and San Jose asked ourselves "Where were the other Japantowns and what is left of them?"  Jill Shiraki and I are Preserving California's Japantowns project staff and our sponsor is the California Japanese American Community Leadership Council. We've received generous funding from the California Civil Liberties Public Education Program. We surveyed nearly fifty historic Japantowns that ranged from smaller, rural communities to larger Nihonmachi and covered the state from San Diego to Marysville. Our main sources were the detailed community directories published by the major Nikkei newspapers. In two areas, Los Angeles and the Sacramento/Delta Region, we were fortunate to have local volunteers work with us on the survey.  In some rural areas, Nisei were absolutely critical in helping us find places that are only identified as PO boxes or rural route addresses in the directories.  It was an honor to work with all of them.

We were surprised that some communities still hold many buildings and sites that are a part of Nikkei history, but even in places where there are historic buildings left, the memories of most pre-WWII Japantowns have been erased.  Our website, http://www.californiajapantowns.org/, describes our survey, highlights of a number of the communities we visited, and includes a searchable database of historic sites.

Are there many Nihonmachi sites in Orange County?

There are a handful, but they are scattered and their association with Orange County's Japanese American heritage is not visible.  For example, a very imposing building at 206 W. 4th Street in downtown Santa Ana held the offices of the local Japanese Association in the early 20th century, and a building that housed the Tamura law office still stands a few blocks away.  Our "sister" project, Japantown Atlas by Ben Pease, has a map based on our survey that shows what is still standing and what has been demolished.  You can find it at http://www.japantownatlas.com/map-orange.html
What has happened to the majority of Nihonmachi sites?

Most have been demolished, which isn't surprising given that Orange County was largely rural in the era we studied.  So many acres of farmland and citrus groves have been paved over since then and were replaced by new developments.

What is the significance of the Wintersburg site (the Furuta home and Japanese Presbyterian Church complex)?

People knowledgeable about Orange County history and Japanese American heritage agree that the Wintersburg Japanese Church complex is extremely significant. Our research for the statewide Preserving California's Japantowns survey confirmed that this is an unusually intact and significant collection of historic buildings with important connections to the history of Japanese Americans in Orange County.  Not only does the site have great local significance, it is a rare example of an intact complex of buildings that reflect a thriving immigrant population from the early 20th century.

What can we learn by preserving these sites?

Historic places like the Wintersburg Church give us an irreplaceable chance to understand what life was like for those who came before us.  And it is important for our historic sites to reflect the full breadth of our history, for those whose heritage it reflects, in this case for Nikkei.  But it is also important for all Americans to have the chance to understand the experiences of people whose heritage is different from their own. Especially here in California, where our population has always been so diverse, it's important to have places where we can honor, remember, and learn about the many communities that have shaped our state's history.

How were/are the Nihonmachi significant to other immigrant groups?

We found that Nihonmachi were connected to other immigrant communities, and other "marginalized" people. Some places that were home to Nikkei were also settled by other working-class people of European descent, other recent immigrants and African Americans. One thing we noticed in our travels was that a number of historic Nihonmachi have continued to be home to newer immigrant groups and are now Latino communities.  These neighborhoods have their own history as "gateways" for people coming to make a new life in the United States.

What have other communities done to preserve Nihonmachi sites?

One of my favorites is the Castroville Japanese Language School.  The Monterey JACL the County Parks Department and other agencies raised funds to renovate the historic gakuen and landscape the area around it as Japanese School Park as a youth center that now serves a primarily Latino neighborhood.  Some places have designated their historic sites as landmarks. The Buddhist Church of Oakland recently successfully nominated their beautiful church as a City of  Oakland landmark; this helps protect the complex as the neighborhood undergoes new development pressures.

The City of Riverside has one of the few Japanese American sites that hold the highest designation as a National Historic Landmark, the Harada House, which was the subject of an important court case that challenged the discriminatory Alien Land Law. The City received funding from the California Office of Historic Preservation and hired me to work with them and students from UC Riverside to identify and document additional sites that reflect the larger history of Japanese Americans in that area.


What does a community gain by historic preservation?

As our physical environment becomes ever more standardized and anonymous (e.g.,  strip mall), historic preservation reinforces a community's identity through the buildings and places and the stories they hold.  For cities and towns that once held a pre-WWII Japantown, historic preservation of these remnants is a way to deepen understanding of local history and make one more step toward redeeming a painful part of our history and reinforcing our nation's commitment to protecting civil liberties. 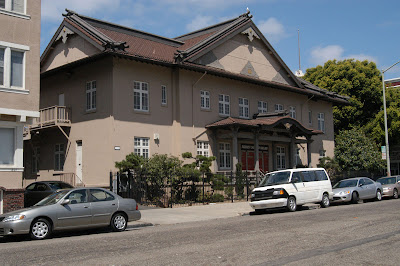 The Buddhist Church of Oakland is one of a handful of California Buddhist churches still housed in their pre-war buildings. It was designed by Nisei George Shimamoto, also the architect of Buddhist churches in San Francisco and San Jose. Just a few years after the sangha was revived following WWII, the church faced the threat of eminent domain when the State of California announced plans to construct a freeway through the neighborhood in 1950. Church members deliberated over the right course of action and ultimately decided to move their church, which was cut in two and relocated three blocks north to its current location at 9th and Jackson.

All rights reserved.  No part of the Historic Wintersburg blog may be reproduced or duplicated without prior written permission from the author and publisher, M. Adams Urashima.
Posted by Surf City Writer at 10:31 AM