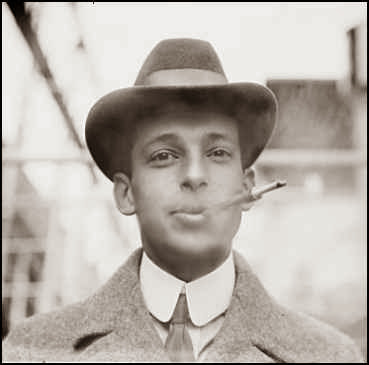 Describing him as a "little French king of the air," the Los Angeles Herald was ecstatic over Hubert Latham's airborne duck hunt over the Bolsa Chica wetlands and beach.  (See our first mention of Hubert Latham at Welcome to the peatlands: farmers, preachers, tycoons, oilmen and outlaws, http://historicwintersburg.blogspot.com/2012/03/welcome-to-peatlands-farmers-preachers.html) 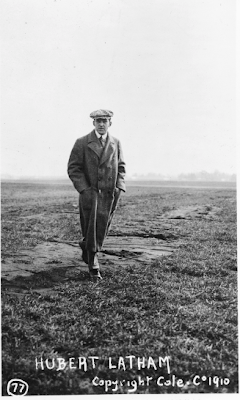 Latham, flew to Bolsa Chica from the Dominguez Aero Park (present day Carson, California), "coming out of the east like a great winged monster that even the birds had not dreamed of, the man invaded the sacred domain of all winged creatures---the ocean---and sailing out over its blue expanse he flew...between great flocks of birds, at times flying faster than they, and to show that his mastery over them was complete he picked one from the air with a rifle shot, while his chugging terror-inspiring craft traveled at fifty miles an hour."

Left: Hubert Latham, circa 1910, the year of his infamous flight over the Bolsa Chica. Photo, Library of Congress

John B. Miller, a Bolsa Chica Gun Club member and member of the Dominguez Aero Park aviation committee, had suggested the stunt to Latham, but later said he "didn't think the aviator would take the proposition seriously."  A group from the Gun Club, aviation committee and members of the media had assembled at the Bolsa Chica for the purportedly unexpected flight.  "It was seven minutes to 12 when a group of watchers at the Bolsa Chica saw a black speck against the eastern sky."

The Herald continues, "then like a great sinister thing, the mammoth craft with its great wings casting ominous shadows on the waves below, swooped down over the ocean and a new terror was added to birddom.  The battle between the man and the bird was on."

Latham reportedly used a 20-caliber rifle and the noise of his plane and rifle fire startled a group of cattle grazing on the outskirts of the Bolsa Chica or "little pockets" pastureland.  The cattle "found refuge in the water at the edge of the lagoons.  Others bellowed their protest at this invasion...by the winged monster."

Thousands of ducks resting in the Bolsa Chica "took wing when the manbird appeared and the flutter of their wings almost drowned the chug of the aeroplane's propeller as they soared away." 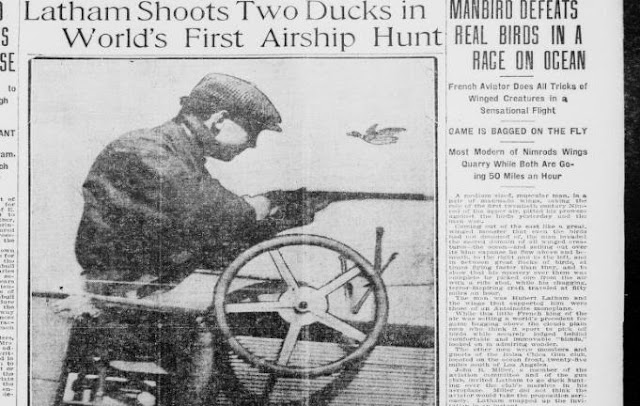 About the ducks, Latham commented, "ordinarily they travel about fifty miles an hour, but when they are being chased, they go faster than this...I would have no trouble in overtaking them, for they tire and the machine does not."  Latham's only concern was that the birds would damage his plane.

Coincidentally, Dominguez Aero Park was hosting their Second Annual International Aviation Meet the day after Latham's flight was reported (see advertisement below from the same edition of the Los Angeles Herald).

Missing from the Herald's report is the reaction of those toiling in the peatlands, who must have heard the commotion and witnessed the scattering of cattle and birds.  Five years earlier, hundreds of farmers and ranchers had petitioned President Roosevelt regarding the Bolsa Chica Gun Club's dam across the tidal inlet blocking navigable waters, without success.  Latham's flight is iconic of worlds colliding (tycoons vs. farmers and ranchers). 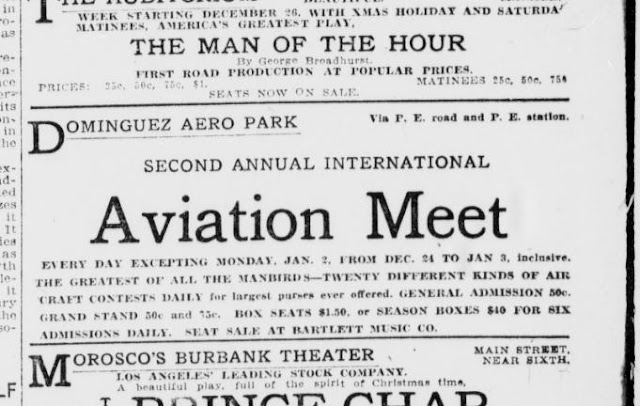 Advertisement from the December 23, 1910 evening edition of the Los Angeles Herald. (Library of Congress, Chronicling America, University of California - Riverside)

All rights reserved.  No part of the Historic Wintersburg blog may be reproduced or duplicated without prior written permission from the author and publisher, M. Adams Urashima.
Posted by Surf City Writer at 12:59 PM