Consider the settlement of America 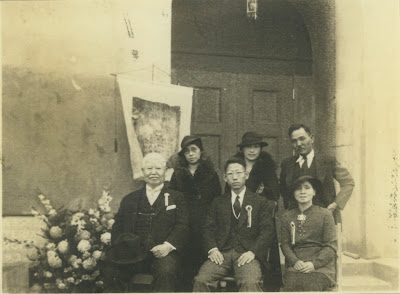 ON THE STEPS OF THE CHURCH - Mission clergy with Wintersburg goldfish farmers commemorating the opening in 1934 of their second church at the corner of Wintersburg (Warner) Avenue and Nichols Lane, thirty years after the founding of the Mission.  (Front left to right) Wintersburg Mission founder Reverend Hisakichi Terasawa, Reverend and Mrs. Kenji Kikuchi,  (back row, left to right) Yukiko Furuta, Masuko Akiyama (Yukiko's sister), and Henry Kiyomi Akiyama. Charles Furuta was behind the camera.  (Photo courtesy of the Furuta family) All rights reserved. ©


In 1930, Reverend Kenji Kikuchi typed out a history of the Wintersburg Japanese Presbyterian Church, describing the Mission property as a "150 ft. by 50 ft., corner lot of church member's goldfish farm."  He also notes the Mission---founded in 1904---is "one of the oldest churches in Southern California" and "the only center of the Japanese community in this vicinity."

The Church's letterhead already identifies with Huntington Beach, even though the Wintersburg District would not be annexed for another 27 years.

By 1973, a City of Huntington Beach Open Space / Conservation report identified the “Old Japanese Church” as a historical cultural landmark.

In 1983, a Cultural Resource Survey Report by Scientific Resource Surveys, Inc., for the Warner Avenue Widening and Reconstruction project identifies the Furuta farm and Wintersburg mission property as eligible for the National Register of Historic Places. 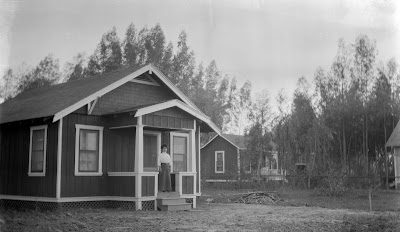 Yukiko Furuta stands on the steps of her new home in Wintersburg Village, circa 1913.  The manse for the Wintersburg Japanese Presbyterian Mission can be seen at the center of the photograph, the rear edge of the Mission building at the far right. The gum trees on the property were planted by Charles Furuta. (Photo courtesy of the Furuta family) All rights reserved. ©

The Environmental Assessment for the "Warner-Nichols Project"---prepared prior to the draft Environmental Impact Report---concludes each building on the Furuta farm and Wintersburg Mission property is "potentially eligible for the National Register and California Register of Historic Places."

The 2012 draft Environmental Impact Report (EIR) acknowledges at least four structures on the Furuta farm and Wintersburg Mission property are eligible for the National Register of Historic Places.  In April and August 2013, the Huntington Beach Planning Commission directed the Furuta barn be added as a local historic landmark.

The 2013 draft Historic Context Survey---a citywide historical resources survey for the City of Huntington Beach---makes the same conclusion, that at least four of the structures at Historic Wintersburg are eligible for the National Register of Historic Places. 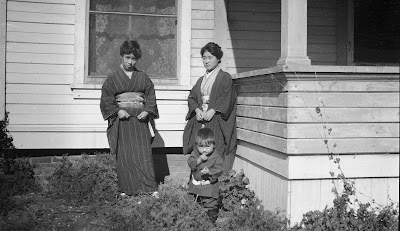 Yukiko Furuta (left) with her sister, Masuko Akiyama, and Yukiko's son, Raymond, at the Cole Ranch in Wintersburg Village, circa 1915.  The Cole Ranch was located south of Wintersburg Avenue and west of Gothard Street, in the area of the present-day Ocean View High School. (Photo courtesy of the Furuta family) All rights reserved. ©

In May 2013,  the U.S. National Park Service inspected the property.  A summary of their key findings was provided to the City of Huntington Beach in August:

a. The property is “potentially eligible for listing on the National Register of Historic Places under Criterion A in association with Japanese American Settlement in the American West.”

b. “Property retains a remarkable amount of integrity,” “none of the buildings are beyond repair,” “site seems to lend itself to development possibilities that could preserve and rehabilitate the historic resources.”

c. “NPS would recommend some general maintenance and stabilization of the buildings. Immediate actions that could easily be accomplished include removal of debris from roofs, cleaning trash and other debris from building interiors, securing doors and windows to keep out elements, etc. Other short-term actions that could be achieved include moth balling the buildings according to preservation standards."

d. “NPS encourages Rainbow Environmental to seek National Register of Historic Places listing for the property and to explore the various Federal and State Preservation Tax Incentive programs that could be used in the rehabilitation of the structures.” 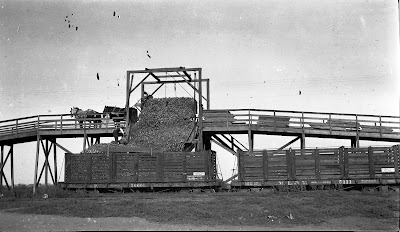 Charles Furuta, dumping a wagon-full of sugar beets at the Smeltzer-Wintersburg siding of the Southern Pacific Railroad, circa 1914-915.  The siding was located near present-day Gothard Street in north Huntington Beach. (Photo courtesy of the Furuta family) All rights reserved. ©

Pioneer history threatened
On October 7, 2013, the Huntington Beach City Council will review the issues of the draft EIR for the "Warner-Nichols Project," which proposes changing the property's zoning to commercial / industrial, and demolishing all of the historic structures of the Furuta farm and Wintersburg Japanese Presbyterian Mission complex.

For eighty-three years---since the first written history in 1930---the property has been documented as being the early 1900s center of the Japanese pioneer community in coastal Orange County.  Under the California Environmental Quality Act (CEQA) under which the EIR process is governed, there must be an "overriding consideration" or justification for the demolition of historic resources.  Per the City of Huntington Beach General Plan, demolition of historic resources is inconsistent with its policies.

The Warner-Nichols Project proposes no development, rather a zone change and demolition--with no description or analysis of the unknown, ultimate future use of the land---and there is inadequate analysis regarding the historical resources, archaeological sensitivities and project alternatives. 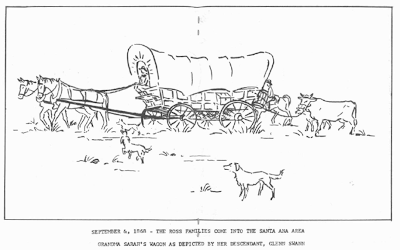 An illustration of the Ross family's arrival in Orange County, circa 1868, by descendant Glenn Swann. (Image: Pioneer Memories of the Santa Ana Valley, Vol. III, 1983)

Archaeological analysis
A history of the Ross family for the Pioneer Memories of the Santa Ana Valley, includes a report by the descendant of Josiah and Sarah Ross that "the Indians in the area had campsites in Newport Beach area and on the Costa Mesa bluffs, Huntington Beach Palisades and in the Wintersburg District. They used to skirt the more populated town and ride their ponies to Grandma's back door...she readily gave them biscuits, sometimes a little coffee and was friendly to them. They never came empty handed. Sometimes they would bring a young rabbit or a few quail and sometimes a wild duck."

The Ross family sold land in the Wintersburg District to the Cole family, resulting in the Cole Ranch (The Historical Volume and Reference Works, Vol. III, Thomas B. Talbert, Historical Publishers, 1963).  In the early 1900s, Tongva artifacts were found on the Cole Ranch, such as the Universe Effigy now on display in the Bowers Museum.  (See http://historicwintersburg.blogspot.com/2012/02/cole-ranch-and-universe-effigy.html)

More recently, an archaeological investigation for an ATT WiFi tower on the former Cole Ranch (now Ocean View High School) unearthed artifacts, such as a grinding stone, along with shell middens.  The expert conclusion is that the land---an approximately three-minute walk from the Historic Wintersburg property---was once a Tongva settlement.  Additionally, a multiple burial site was found in the 1970s only 1320 feet northwest of the Furuta farm (Shell Midden, Site Number 30000346).    It is unrealistic to assume the Tongva were never on the Historic Wintersburg property.

Also not identified in the EIR, are the locations of the goldfish ponds, trash disposal areas, outhouses, and prior structures (e.g. the Terahata house temporarily on the Furuta farm), their locations being potential sources for early 1900s archaeological finds.

Despite known Tongva campsites and evidence of nearby settlement, the EIR dismisses the possibility of any findings.  There has been no comprehensive field study to determine archaeological resources on the Historic Wintersburg property and the EIR does not include recent area surveys.  Several professional archaeologists--with experience in Orange County and elsewhere in California--have written the City expressing their concerns and noting the EIR does not include recent archaeological studies in the area. 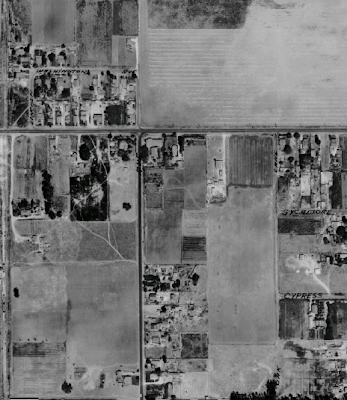 This 1947 aerial shows the Furuta farm and Mission complex near the center of the image, Wintersburg (Warner) Avenue running east to west, horizontally across this image.  The Mission complex and Furuta home are on the southeast corner of the intersection of Wintersburg Avenue and Nichols Lane.  The Nichols family home also is visible on the south side of Wintersburg Avenue, west side of Nichols Lane.  Oak View Elementary School is today located in the area beyond the south end of the Furuta farm, that area then farmland and a few small buildings.

Impacts and Alternatives
Per CEQA intent and case law, projects must adequately and comprehensively analyze future land use impacts.  This cannot be done when there are no development plans, segmenting the ultimate land use from the proposed project.

"We hold that an EIR must include an analysis of the environmental effects of future expansion or other action if: (1) it is a reasonably foreseeable consequence of the initial project; and (2) the initial expansion or action will be significant in that it will likely change the scope or nature of the initial project or its environmental effects." (Laurel Heights Improvement Association v. Regents of the University of California).

The appeal by the Ocean View School District regarding the planning commission recommendation to certify the EIR relates to lack of analysis regarding impacts of unknown industrial uses of the ultimate project on the adjacent Oak View Elementary School and childcare center.

The EIR did not provide a list of potential relocation sites for the historic structures and there is no documentation of analysis of sites considered and explanations why they may or may not be suitable (the Historic Wintersburg Preservation Task Force has now undertaken this task as a "plan B" measure). 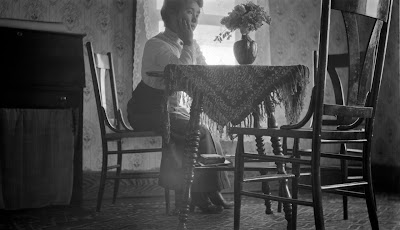 Yukiko Furuta in contemplation, circa 1914.  This photograph was taken inside the Cole Ranch house, in Wintersburg. (Photo courtesy of the Furuta family)
All rights reserved. ©

Mitigation
According to the California Public Resource Code, "by definition, a substantial adverse change means, 'demolition, destruction, relocation, or alterations,' such that the significance of an historical resource would be impaired. For purposes of National Register of Historic Places eligibility, reductions in a property’s integrity (the ability of the property to convey its significance) should be regarded as potentially adverse impacts." (PRC §21084.1, §5020.1(6))

The mitigation proposed for the demolition of significant historic resources---photo documentation---is the minimal mitigation available and does not reduce the impact of demolition to "less than significant."  In California, in most cases the use of drawings, photographs, and/or displays does not mitigate the physical impact on the environment caused by demolition or destruction of an historical resource (14 CCR § 15126.4(b)). 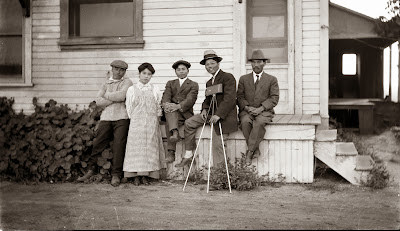 Yukiko Furuta and Charles Furuta (far right) at the Cole Ranch in Wintersburg, circa 1914. (Photo courtesy of the Furuta family) All rights reserved. ©

The question remains
The National Trust for Historic Preservation reports, "across the nation a tear down epidemic is wiping out historic neighborhoods" forever changing the historic character and identity of communities.

Historic Wintersburg includes a history that many had forgotten.  This five-acre property holds the history of Japanese pioneer settlement, agricultural development, Huntington Beach's mission era, the struggle for civil liberties, the achievements of those who served during wartime, and the injustice of forced evacuation and incarceration during World War II.  It also holds the history of those who returned and the remarkable endurance of the human spirit.

Now that we know more of the history---and the history yet to be uncovered---the question remains: will we consider the settlement of America and will we save it for future generations?


© All rights reserved.  No part of the Historic Wintersburg blog may be reproduced or duplicated without prior written permission from the author and publisher, M. Adams Urashima.
Posted by Surf City Writer at 10:14 PM No comments: