Cole Ranch and the Universe Effigy 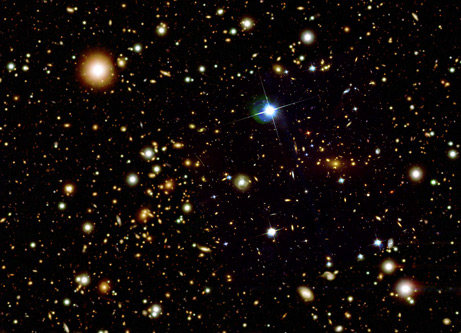 Wintersburg Village, it seems, has always been a place where people gather, share their lives, and practice their faith.  In addition to the mission and churches that date back to the early 1900s, there is evidence of spiritual practices dating back thousands of years.  Wintersburg Village was the land of the Tongva (aka Gabrielino).

In Chinigchinich, Friar Geronimo Boscana (Fred Robinson translation, 1846) writes his observations of the life and practices of the first Southern Californians.  It is a decidedly ethnocentric view---Boscana was not an objective party---but a few insights can be gleaned.

Boscana reports the belief that when the body died, the heart remained "to dwell among the stars, and like them throw its light upon the earth. For this reason, they said that the planets, and most luminous bodies, were their hearts, or in other words, they were themselves, in reality."

When they looked into the night sky, they saw themselves.  They were part of the universe.

In 1898, the Cole family moved to California, eventually buying land in Wintersburg.  Samuel Armor writes in A History of Orange County (1921), that Myrtle Cecillian Cole was a New York lawyer who "took up agriculture and horticulture, farming twenty acres at Wintersburg...improved this place and afterward sold it, and then purchased the sixty-acre Ross ranch near Wintersburg."

In Pioneer Memories of the Santa Ana Valley (Vol. III, 1983), a Ross family descendant recalls that when her family arrived in 1868, the native Californians "had campsites, in Newport Beach area and on the Costa Mesa bluffs, Huntington Beach Palisades and in the Wintersburg District."

Of M.C. Cole's four children, it is later noted in oral histories that Homer Cole eventually joined his father in working the former Ross farm, continuing after M.C. Cole's death in 1916.

Sometime between 1902 and 1910, Homer Cole brought home to his wife, Jesse Hoffman Cole, a stone object found by a plowman working on the Cole Ranch.  It was a perfect circle of chlorite schist with an indent and notches incised in what looks like a butterfly pattern at the top.  To the Cole family, it was probably an interesting curiosity.

To the Tongva, it was the universe.

Revisiting the Universe Effigy
The "Universe Effigy" quietly resided at the Cole Ranch for over twenty-five years before being loaned to the Bowers Museum in 1936, catalog number 2878.  Scholars recently took another look.  In their 2009 paper for the Pacific Coast Archaeological Society Quarterly (PCAS), Henry Koerper and Paul Chace write, "the Universe Effigy is arguably the most esthetically spectacular of all California magico-religious artifacts" and that the Cole Ranch discovery was "the first Universe Effigy to come to modern attention. 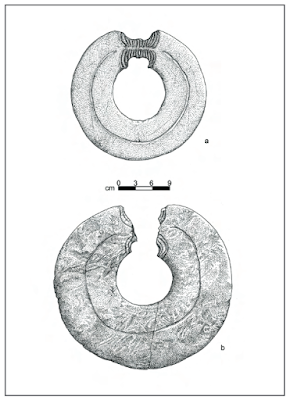 LEFT: A sketch of the Universe Effigy, found on the Cole Ranch in Wintersburg Village on land that is now Ocean View High School. (Pacific Coast Archaeological Society Quarterly, Vol. 41, 2009)

Other Universe Effigies have turned up along the coast, in San Mateo Canyon and in Riverside County.  Koerper and Chace note "nearly all of the effigies were fashioned from chlorite schist, perhaps mined on Catalina Island."

Koerper and Chace consider a correlation between the effigies and ground paintings that conceptualize the universe, and that the effigies were Chinigchinich objects used for female rights of passage.  The universe representations include concentric rings indicating the Milky Way and the human spirit.  Another scholarly view noted by Koerper and Chace posits the effigies may represent the "oval sacred enclosure, the wamkish, a ritual place for, among other things, initiations and ground paintings.  The wamkish...stood as a microcosm of the earth and universe."

At some point, the lives of Wintersburg Village's first residents and its later pioneers connect.  Wintersburg Japanese Presbyterian Mission congregants C.M. Furuta and Henry Kiyomi Akiyama lived at the Cole family house on Gothard Street and worked on the ranch with M.C. and Homer Cole where the Universe Effigy was found.  Furuta--known to be a fine horseman--worked the horses and Akiyama worked the land.  Whether or not the timelines match up and Akiyama was the plowman who found the effigy is unknown.

Koerper and Chase refer to the Effigy as a "portable cosmos" whose "morphology and design elements suggest a rich complexity of symbolic communications.

Charles Irwin, in his paper, A Material Representation of a Sacred Tradition, for the Journal of California Anthropology (1978) writes about the Universe Effigy that, "every human society has a world view that includes the structure of the universe and earth, the origin and history of the society and its aspirations...our species has expressed sacred concepts in material symbolizations for millenia."

In simpler terms, perhaps the Universe Effigy is a reminder that---after 9,000 years---there is a little more to Historic Wintersburg than meets the eye.

© All rights reserved.  No part of the Historic Wintersburg blog may be reproduced or duplicated without prior written permission from the author and publisher, M. Adams Urashima.
Posted by Surf City Writer at 2:27 PM