The Erasure of Community History 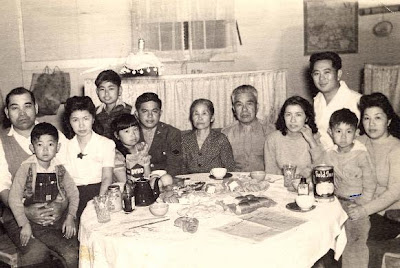 The Faces of Wintersburg -- Kazuo "Kaz" Masuda (center, in uniform) visiting his parents and family at the Jerome Relocation Center.  Kaz was with the 442nd Regimental Combat Team and was killed in Italy in 1944.   Kaz Masuda was posthumously awarded the Distinguished Service Cross and, in 2011, the Medal of Honor.  The Kazuo Masuda Middle School in Fountain Valley is named after him.  The Masuda family were congregants at the Wintersburg Japanese Presbyterian Church.

California held the largest population of people of Japanese descent, or Nikkei, in the United States just before World War II, yet their historical presence is often invisible today in cities and towns where they farmed, fished, built businesses, and established institutions.  Wartime incarceration wreaked havoc on the physical and social fabric of communities across the West Coast, as well as on 120,000 individuals (over three quarters Californians).

At the onset of World War II, most Japanese Americans did not own their homes or places of business due to discriminatory early 20th-century laws restricting Asian immigrants’ rights to own property. Few Nihonmachi were able to regain their pre-war vitality, and many suffered yet again from urban renewal programs in the 1960s that destroyed what was left. The erasure of community history was one of the many painful legacies of forced removal and incarceration of Nikkei...