Yukiko Furuta: An arranged marriage brought her to Wintersburg, California 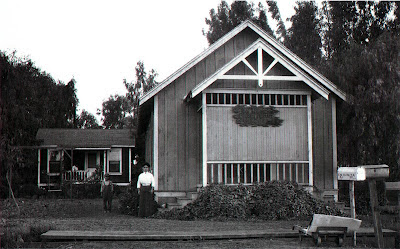 Yukiko Furuta in front of the Wintersburg Japanese Presbyterian Mission, circa 1920s.

One of the oral histories was conducted with Yukiko Furuta while she was still living in her home on Warner Avenue.  "When she came from Japan (1912) it was before she was even eighteen years old. So, she did not have any particular idea about coming to the United States...A neighboring lady knew a lot about America because she knew many people who had come to America. So, she told Mrs. Furuta that America was a nice country, and she could have a good life in America. She (Mrs. Furuta) was only seventeen years old at that time, and she thought that if it was such a nice country, she would go."

The interviews--conducted by CSU - Fullerton history professor Arthur A. Hansen--provide a glimpse into Yukiko Furuta's life before she left Hiroshima, Japan, and her impressions of her new husband, Charles Mitsuji Furuta.

"Mr. Furuta was a Christian... He was the first person of Japanese ancestry to be baptized in Orange County... Mr. Furuta learned English from Reverend Terasawa, commuting on his bicycle to church in the evenings. He was a very sincere Christian and an honest, hard working man. He did not smoke or drink. So he got a very good reputation from the hakujin farm owner (from whom he rented land), who trusted him. And he could borrow money from this owner. He worked very hard so he could pay back the debt and even save money to buy the land."   C.M. Furuta bought land in Wintersburg to build his home and was instrumental in the founding of the Wintersburg Japanese Presbyterian Mission and Church.

"When she came from Japan, she didn't know anything. Because her mother didn't make her do house chores. So she learned how to cook rice after she came here, from Mr. Furuta. (laughter)...  So she tried to learn how to do all their Japanese cooking from the magazines she subscribed to... She learned everything after she came here."

The full interview with Yukiko Furuta can be found at: http://texts.cdlib.org/view?docId=ft7p3006z0&doc.view=entire_text

All rights reserved.  No part of the Historic Wintersburg blog may be reproduced or duplicated without prior written permission from the author and publisher, M. Adams Urashima.
Posted by Surf City Writer at 3:52 PM