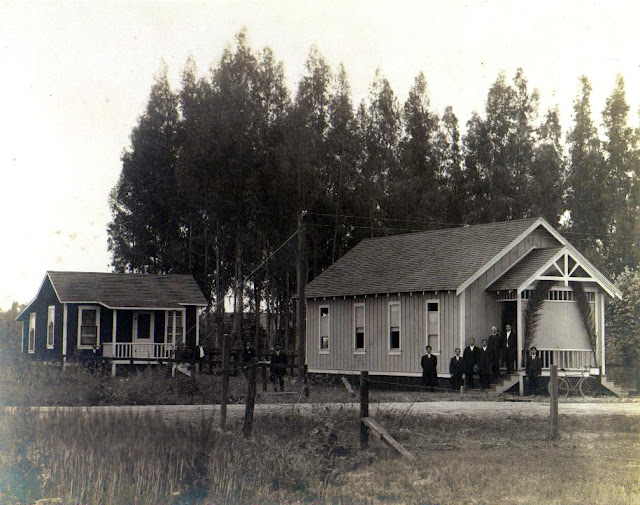 ABOVE: The Japanese Presbyterian Mission and manse on Wintersburg Avenue (now Warner Avenue), circa 1910. Courtesy of the Wintersburg Church. © ALL RIGHTS RESERVED

When the Church's historical summary was written--over eight decades ago--it already was described as "one of the oldest Japanese churches in Southern California."

Ten Japanese pastors had served the Mission by 1930, which was known to be the "only center of the Japanese community in this vicinity."  In Orange County, the Anaheim Japanese M.E. Church had served a smaller population of Japanese immigrants, about a fifth of the size of Wintersburg.

The beginnings of Wintersburg
At the time the Wintersburg Mission was organized in 1904, the official census of Orange County still had not included a population count for Huntington Beach.  It wasn't until the 1910 census that Huntington Beach reached a notable 815 population (after officially incorporating in 1909).

The Japanese Americans settling in North Orange County had, for the most part, migrated here for agricultural work, helping the "peatlands" of Wintersburg become one of the celery capitals of America.  Some had left Japan to avoid being drafted into the Imperial Army, others simply to find a better life.  Some were Christian of various denominations and some were Buddhist.

The celery trains
The Los Angeles Herald reported on January 18, 1905, that the Southern Pacific Railroad was "running special trains loaded with celery and bound for eastern markets."  The Herald noted 25 to 30 car loads left daily on the rail line running down to the Wintersburg celery fields and Smeltzer packing station in present-day north Huntington Beach.

This also was the time of St. Louis' Louisiana Purchase Exposition, a World's Fair at which California again made a big impression on winter-fatigued easterners.  In the same 1905 Los Angeles Herald edition, Charles L. Wilson, California's superintendent of the installation of exhibits at the Louisiana Purchase Exposition, was quoted "everywhere I heard people talking about California."

"When I left St. Louis, it was eight degrees below zero.  It was fifteen below at Kansas City, and colder as we came through Kansas, with snow and sleet all the way to Needles, 300 miles east of Los Angeles," continued Wilson.   Wilson's train arrived in San Bernardino at sunrise to clear, sunny skies.  "People on the train who had never before gazed upon California scenery, and were a little doubtful of the truth of some of the glowing stories they had heard of the glorious southland, when they looked out of the car windows this morning were in ecstasies of delight..."

The Herald also reported tourist travel to Southern California was growing, packing the Southern Pacific and Santa Fe railroads "to their fullest capacity.  The larger hotels are rapidly filling up"  and the Santa Fe "Pullman accommodations for lower berths on their limited out of Chicago have been exhausted..."

Reverend Kenji Kikuchi
By 1930, when the Wintersburg Japanese Presbyterian Mission began contemplating their 1934 church building effort, the population of Orange County's Japanese Americans had grown.  The Rev. Kenji Kikuchi, M.Th., became the pastor in1926, having completed seminary in Japan and theology studies at Princeton.  His report noted the "situation of the Japanese people in Orange County" as having a population of 2,000, "most of them farmers...about 350 families."

Rev. Kikuchi's historical summary noted there were about 150 families in the immediate vicinity of Wintersburg.  "... Most of them are dry chili pepper farmers-they raise half million dollars a year production from peppers.  Also there are three bid (sic) gold fish farms owned by our church members."  These would have been the gold fish farms of C.M. Furuta--who donated the land for the Mission--and the Asari and Akiyama families of Wintersburg.


In his 1981 oral history interview with Arthur Hansen, history professor with CSU Fullerton, Rev. Kikuchi remembers learning about Wintersburg, "After coming to California, I found a Japanese community I never knew existed and which very strongly needed a leader and pastor. I felt very deeply about such a mission.

Rev. Kikuchi recalls "the Japanese people or community wanted to bring in a minister who spoke English, who knew the United States. So we started. The community relation was very close, more familylike, and I had to help out the children, calling for a doctor or taking a patient to the hospital. Nobody could help but the minister, and he was in the best position to help out."

"So many young people came to this small Wintersburg church in Orange County," continues Rev. Kikuchi, 83 years old at the time of his interview.  "It was the building behind the current (1934) building, very old. It was built in 1910, and my predecessor as pastor was Reverend Junzo Nakamura.  He was a very good leader, and it was kind of a painstaking job for a minister because it was not a formally organized church. We had to start from nothing and we had to teach many things."

When Rev. Kikuchi arrived, Rev. Nakamura had already left for a ministry in San Diego and it was clear the Wintersburg Mission needed him, "...the corner lot where the church was located was overgrown with dry weeds. Then about a hundred Japanese people, Issei and Nisei, came to the area so I was deeply determined to take care of them."

About two years after Rev. Kikuchi arrived at the Mission, it organized as a church, the Japanese Presbyterian Church of Wintersburg.

Building a new Church during the Depression years
The funds for the 1934 church building were raised--and almost lost--by Wintersburg's Japanese American community during the Great Depression.

"We collected donations little by little. First, we deposited the money in the Huntington Beach Bank, a state bank. But in the prime of the Depression, the deposits were frozen," remembers Rev. Kikuchi.  "Charlie's (Ishii) father and I ran to the Huntington Beach Bank but the bank was closed. We almost felt like crying. But, later, when we fixed pews in the church, we could draw our deposit from the bank after the arrangement by the government. In this way, we collected small amounts of money little by little."

Rev. Kikuchi stayed on as pastor at the Japanese Presbyterian Church until 1936, after the construction of the 1934 church building (in front of the 1910 building) on present-day Warner Avenue at Nichols Lane.  In 1942, he and his wife, Yoshi, were evacuated to the Poston, Arizona Relocation Center.  Interviewer Arthur Hansen recalls Rev. Kikuchi's discussion about the Japanese American experience in Orange County by noting that "Reverend Kikuchi radiated a warmth and good cheer rarely seen by me in any other people I have known..."

"So for ten years I never got tired, never became disappointed, and thoroughly enjoyed myself," Rev. Kikuchi recalls of his time at the Japanese Presbyterian Church in Wintersburg, "most of the people enjoyed our lives with us like we were a family."

All rights reserved.  No part of the Historic Wintersburg blog may be reproduced or duplicated without prior written permission from the author and publisher, M. Adams Urashima.
Posted by Surf City Writer at 5:38 PM