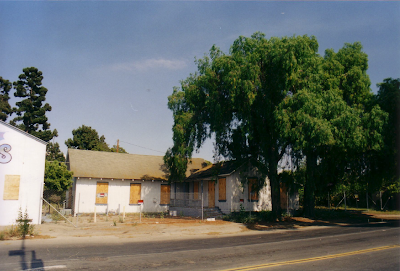 The Wintersburg Japanese Presbyterian Mission and Manse, not yet fenced by security screening, after its purchase by Rainbow Environmental Services.  (Photo, City of Huntington Beach archives, circa 2003)

A Huntington Beach church founded in 1902 served Southern California's Japanese population for decades. But plans to demolish the unused buildings raise the issue of their significance.

The old church building looks forlorn at Warner Avenue and Nichols Street in Huntington Beach, its windows boarded up and the sign that juts over the sidewalk mostly smashed.
From a distance, the structure doesn't give many indications of the role it once played in Orange County.

Near the front door, though, a small cornerstone bears the words "Japanese Presbyterian Church A.D. 1934." And that's the history that some in Orange County hope to save.

The former Wintersburg Japanese Presbyterian Church — located on a 3.7-acre property along with a historic house, mission and minister's quarters — has belonged to Rainbow Disposal since 2004. The Huntington Beach trash collection company now seeks to demolish all the structures. But there is a push to preserve them.

Officials from the Orange County Historical Society said the buildings, some more than a century old, represent an important link to Asian American history in Orange County...

Read the full article on the Los Angeles Times website at http://articles.latimes.com/2011/may/16/local/la-me-church-demolished-20110516.

All rights reserved.  No part of the Historic Wintersburg blog may be reproduced or duplicated without prior written permission from the author and publisher, M. Adams Urashima.
Posted by Surf City Writer at 12:12 PM