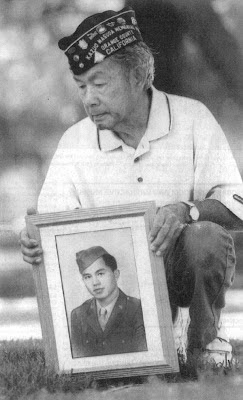 Fountain Valley resident Masuo "Mas" Masuda holds a photo of his brother, Kazuo "Kaz" Masuda.  Kaz Masuda was a member of the "Go For Broke" 442nd, killed in Italy during WWII.  Both Mas and Kaz attended Huntington Beach High School--both on the football team--and the Masuda family were congregants of the Wintersburg Mission.  Both were awarded the Congressional Medal of Honor.  The Masuda family was first confined in Rohwer, Arkansas, then later at Gila River in Arizona. (Photo courtesy of Orange County Register)

Tashima had attended Ocean View Grammer School and was a student at Huntington Beach High School when his family was forced to leave California for incarceration at Poston.

"...I wrote to the principal of Huntington Beach High School to inquire about my graduating with the class, and he wrote back saying all I had to do was complete one course, and that was civics, and they asked me to write a paper on the relocation camp," remembers Tashima.  "So I wrote that and turned it in and they gave me a passing grade. So I was able to get my diploma with my graduating class."

Tashima later served in the U.S. Army, "Well, I thought it was my duty; after all, I was born in this country and ninety percent of the other Japanese American kids felt the same way."

On this Day of Remembrance anniversary of Executive Order 9066, we remember some of the alumni from Huntington Beach High School, all U.S.-born citizens, incarcerated during World War II due to their ancestry. 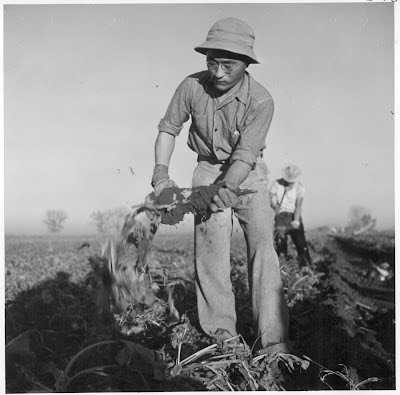 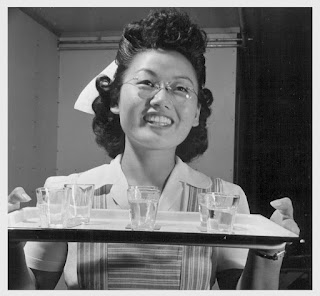 "Kiyoko Tatsukawa, former high school student from Huntington Beach, California, and a graduate of the spring 1943 class in Nurse's Aid at the Poston Hospital. Pretty Kiyoko is shown demonstrating her most charming bed-side manner, before administering medicine to the fortunate patient." (UC Berkeley, Bancroft Library) 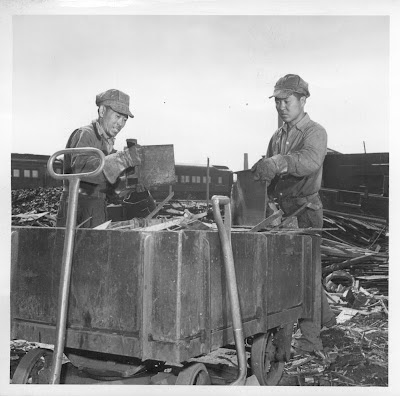 "Harley Asari, left, relocatee from the Poston, Arizona Relocation Center, and Kenneth Jimbo, a voluntary evacuee from Huntington, California, shown at their work at the U.S. Foundry at Denver. They are among approximately 25 Japanese-Americans employed at the foundry, which applies strategic materials to war plants which are producing large quantities of materials for the armed forces. Asari is a former resident of Huntington Beach, California, where he ran a gold fish hatchery before evacuation. He was evacuated directly from Huntington Beach to Poston." (UC Berkeley, Bancroft Library)

The full interview with Yoshiyuki Tashima, conducted by Pat Tashima for California State University - Fullerton, can be viewed at http://texts.cdlib.org/view?docId=ft809nb3zk;NAAN=13030&chunk.id=d0e119&toc.id=&toc.depth=1&brand=calisphere&anchor.id=p1#X

All rights reserved.  No part of the Historic Wintersburg blog may be reproduced or duplicated without prior written permission from the author and publisher, M. Adams Urashima.
Posted by Surf City Writer at 7:20 PM