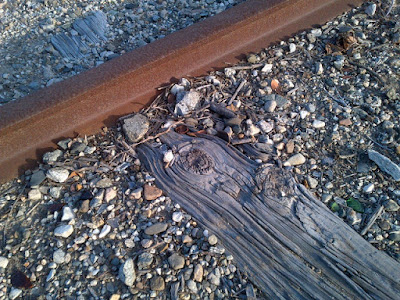 A remnant of the Southern Pacific rail line extending to the celery fields and packing plants for Smeltzer and Wintersburg. (Photo, February 2012)

Houses of worship and schools have always been an indicator that a dusty spot in the road is transforming into a community.  The arrival of trains means the community has a future.

In December 1904, townspeople gathered to discuss holding regular Sunday school in Wintersburg.  The Japanese Presbyterian Mission had already declared itself (see The Wintersburg Mission, Feb. 20, 2012 post), but the growing community needed churches of different denominations.  The armory building on the northwest corner of Wintersburg (Warner) Avenue and Gothard---which had been moved to Wintersburg from Fountain Valley---was used for meetings until the community's churches were constructed.

The present-day Community United Methodist Church recalled this history during their centennial in 2005, "Several families had been traveling – not by car; those were very rare yet in Orange County, but on foot and horseback and wagons – to churches at many miles distance."

Local historian Jerry Person writes in his 2005 Huntington Beach Independent column, Centennial Call, that "at this first meeting, a group of 15 people of different religious denominations (Baptist, Presbyterian and Methodist) wanted to establish a community Sunday School...the little congregation of 15 grew to over 60 members in 1905."

At that time, the Community United Methodist Church was known as the Wintersburg Methodist Evangelical Church.  One of the Wintersburg ME Church's early founders, Charles Applebury, recalled Sunday school students "met in the afternoon, in order to give the unheated building 'time to warm' from the afternoon sun."  According to Person, Sunday school seating was improvised from wooden planks placed on the inevitable celery crates and Wintersburg's "hearty pioneers used newspapers covered with clean packing paper for seat padding."

The Wintersburg ME parcel also hosted a small one-room library for Wintersburg residents until the 1950s.  More than 100 years later, the iconic wooden church constructed on that site still stands.  It is now the Warner Avenue Baptist Church.

Also in the early 1900s, "the school on wheels", Huntington Beach High School arrived in Wintersburg (before moving to its present-day location on Main Street in 1908).  Preceding this was Ocean View Grammar School, a wooden school house with bell tower, constructed in 1911 at the southwest corner of Stanton (now Beach) Boulevard and Wintersburg (now Warner) Avenue.  Demolished in the late 1960s, this is where the Comerica Bank building stands today.

Running down the middle of all this activity was the Southern Pacific Railroad line that served the Smeltzer and Wintersburg celery fields and packing stations.  It was a key factor in the birth of Wintersburg and the arrival of Japanese immigrants.

U.S. Asians explains, "the development of irrigation in California opened the way  for intensive agriculture and a shift from grain to fruit and vegetable production.  Between 1879 and 1909, the value of crops from intensive agriculture skyrocketed from just 4 percent to 50 percent of all crops grown in California.  This transformation occurred under a market stimulus created by two key technological achievements of the period -- the completion of the national railroad lines and the invention of the refrigerated car.  Consequently, for the first time perishable fruit and vegetables from California could be sold almost anywhere in the United States."

As noted in The Wintersburg Mission, by 1905 twenty-five to thirty train cars left daily filled with Wintersburg celery.  Things were looking bright and people were putting down roots.

Running parallel to Gothard Avenue, remnants of the rail line can still be found today in the railroad right-of-way.  While the "ghost line" ends abruptly, it's not hard to imagine the noise and commotion that accompanied the daily arrival of the train in Wintersburg. 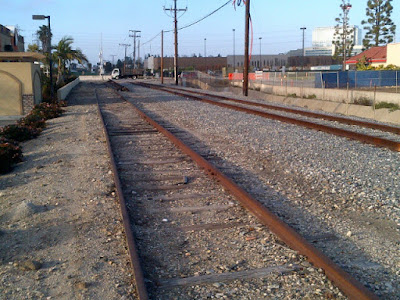 Tracks to nowhere:  Looking north on the Southern Pacific Railroad line that led to Wintersburg in the railroad right-of-way off Smeltzer (now Edinger) Avenue. (Photo, February 2012)

All rights reserved.  No part of the Historic Wintersburg blog may be reproduced or duplicated without prior written permission from the author and publisher, M. Adams Urashima.
Posted by Surf City Writer at 4:57 PM