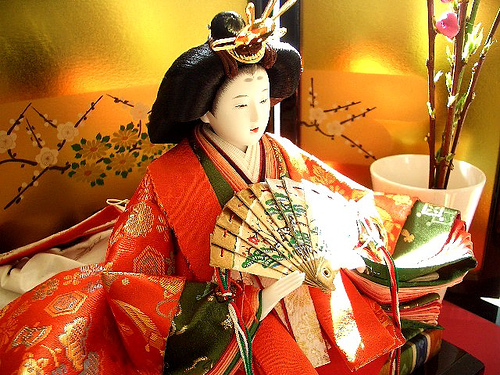 The dolls are part of the Japanese tradition of the Girls Festival--Hinamatsuri--celebrated each March 3.  Representing the emperor and empress, the dolls are meant to protect girls from evil spirits. Fullerton College notes the Anita Shepardson Hina doll collection is "in remembrance of an instructor who dedicated her life to her students and worked to promote understanding between two cultures." 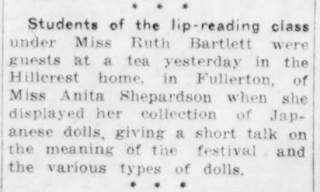 LEFT: One of the many events Shepardson hosted in her Fullerton home, a March 1937 tea for hinamatsuri. (Santa Ana Register, March 1, 1937)

To many, Anita Shepardson was known as Ma Shep.

Clarence Iwao Nishizu, a congregant of Wintersburg Japanese Church, says Shepardson was called Ma Shep "because she had the charm and love of a mother to all of us."  When the Santa Ana River flooded in 1938 and many of the Japanese families lost their homes, Nishizu says Ma Shep opened her home to them.  Shepardson became a good friend to the Nishizu family.

Going above and beyond for her students
Shepardson started the Japanese Club for her Nisei students at Fullerton High School and Fullerton College, encouraging traditional Japanese arts and culture.  She took her students on field trips to places like the Sierra Madre Flower Garden and Huntington Library.  She helped them with the customs and manners that would help them succeed.  Ma Shep also provided her personal spiritual opinions, prompting students to attend church. 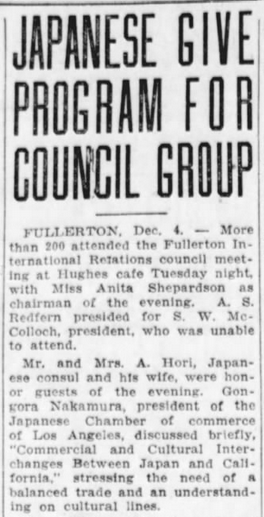 Shepardson wrote a play for her students, The Emperor's Doll, and invited the Los Angeles Times and other local media to attend their performance.  In turn, the her students presented Fullerton College with cherry trees and a Japanese garden.

RIGHT: Shepardson chaired a Fullerton International Relations council meeting in 1935, focused on commercial and cultural exchanges between California and Japan. Students from the Japanese Club that Shepardson initiated at Fullerton College helped host the dinner, wearing traditional Japanese attire and hand-painting place cards.  In addition to the Consul General of Japan Tomokazu Hori (who had been feted at a banquet in Huntington Beach in April 1935), and president of the Japanese Chamber of Commerce Gongora Nakamura, Seattle-born Kay Sugahara was a featured guest speaker. Sugahara was a 1932 UCLA graduate, organizer of the Nisei Festival in Little Tokyo, Los Angeles, had helped establish the Japanese American Citizens League (JACL) in Orange County, and, in 1935, was president of the JACL in Los Angeles. He and his family were confined at Amache (Colorado) during WWII.  He later built Fairfield-Maxwell Ltd., a worldwide ship-owning business. His obituary in 1988 noted he continued to work on international relationships between the U.S. and Asia, something he held in common with Shepardson. (Santa Ana Register, December 4, 1935)

Shepardson had to have been aware of those in Orange County who held anti-Japanese sentiment.  She probably heard reports about families who had night visits from Orange County's Ku Klux Klan.  It would have been hard to ignore Sacramento Bee publisher V.S. McClatchy's testimony, On the Japanese Problem, before the House Committee on Immigration and Naturalization during its hearings in California in July 1920. 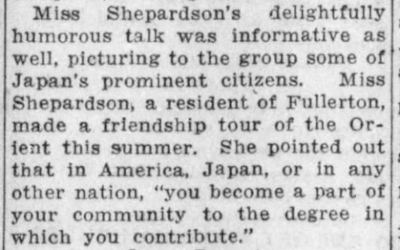 LEFT: Shepardson was invited to speak to community organizations--such as the Santa Ana Y.W.C.A.meeting in September, 1938--after her "friendship tour" of Japan, as an invited guest of the Consulate of Japan. Japanese Americans in Orange County paid for her trip. (Santa Ana Register, September 28, 1938)

An invitation to tour Japan
Reaching beyond her students, Shepardson was active with Fullerton's International Relations Club and the Japan America Society of Los Angeles.  In addition to her Hina doll collection, Shepardson collected Japanese fine art and woodblock prints.  Nishizu remembers, "often she served tea to guests at her home and had the Nisei students interpret classic dancing and perform other cultural arts and traditions like the tea ceremony."

December 1941
On December 7, 1941--the day Japan bombed Pearl Harbor--Nishizu was delivering vegetables in Los Angeles. On his way back to Orange County, he was stopped by the police.

"I was really scared," recalls Nishizu, "Other Nisei shared my fear and accompanying depression. The general public viewed us with suspicion as if we had committed something wrong. Even the attitude of our next door Caucasian neighbor suddenly changed. We were disheartened as to our future. We were in a quandary."

When a community meeting was called at the Farm Bureau in Santa Ana, Shepardson was there.  It was the last time Nishizu saw her.  He would be confined at Heart Mountain in Wyoming.

Shepardson traveled to the Poston, the Colorado River Relocation Center, numerous times to see her students and their families.  During his 1982 oral history interview, Nishizu worried that "as a lover of Japanese people, she must have suffered due to the prevailing anti-Japanese atmosphere in the country during the war years."

Her lamp was always lighted
In the February 5, 2005, Los Angeles Times article, A Lifelong Lesson in Justice, http://articles.latimes.com/2005/feb/05/local/me-teachers5, Teresa Watanabe writes, "For more than 60 years, the students have not forgotten their teachers...one group of people in particular gave them hope: the teachers, most of them white, who volunteered to join them."

The Japanese American National Museum honored in 2005 more than 200 educators who braved the tumultuous times and prison camp conditions.  Unfortunately, Shepardson was not there to re-connect with her students.  Ma Shep died in 1945.

Nishizu  wished, "she could have lived just long enough to have welcomed all of her Japanese friends back from the camps at the end of the war and to have joined them in reminiscing..." 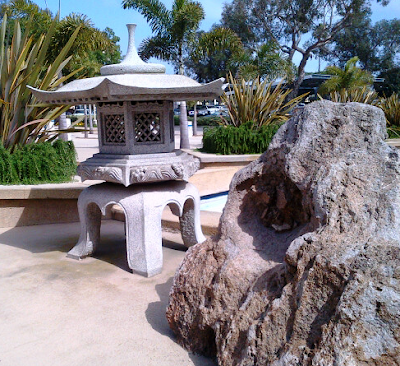 Nishizu recited an excerpt from a Robert Browning poem in memory of Shepardson during his 1982 oral history, "God gives each man one light, like a lamp, then gives that lamp due measure of oil. Lamp lighted--hold high, wave wide its comforts for others to share."

"Anita Shepardson had a goodly portion of oil," remembers Nishizu, "Her lamp was always lighted. She held it high. She waved it wide. She shared its light."

©  All rights reserved.  No part of the Historic Wintersburg blog may be reproduced or duplicated without prior written permission from the author and publisher, M. Adams Urashima.
Posted by Surf City Writer at 3:21 PM