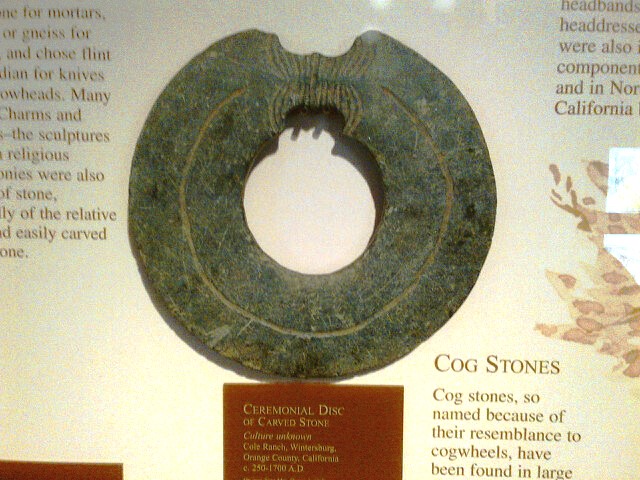 ABOVE: The "Universe Effigy" found circa 1902-1910 on the Cole Ranch, the site of present-day Ocean View High School off Warner (Wintersburg) Avenue and Gothard Street.  (Bowers Museum, Santa Ana, California)

For those unable to visit the Bowers Museum in Santa Ana, California, we made the trip for you.  The above photograph is the "Universe Effigy" found  at the turn of the 20th Century by a plowman on Wintersburg's Cole Ranch.

The Universe Effigy resides in a glass case in the California Paintings hall at the Bowers Museum, donated by the Cole family in the 1930s.  See the original post about Cole Ranch and the Universe Effigy, February 16, 2012 , at http://historicwintersburg.blogspot.com/2012/02/cole-ranch-and-universe-effigy.html

Wintersburg's Furuta and Akiyama families lived and worked with Homer Cole on the Cole Ranch (see a photo of Yukiko Furuta feeding chickens at the Cole Ranch in 1915, Voices from the past: Part Four, The Wintersburg Interviews, April 14, 2012 post, http://historicwintersburg.blogspot.com/2012/04/voices-from-past-part-4-wintersburg.html). 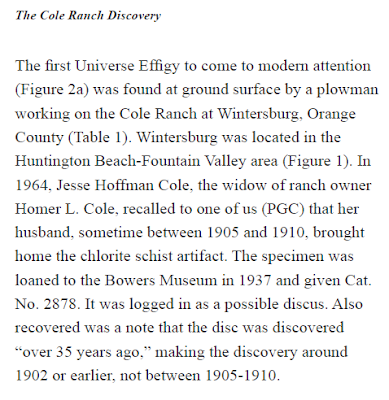 LEFT: Archaeologist Paul Chace first detailed the Cole Ranch finds in the Pacific Coast Archaeology Society Quarterly, noting the find was reportedly made by a plowman circa 1902 or earlier. (Locating the Buck Ranch Prehistoric Burial Ground, Huntington Beach, Vol. 40, No. 2, 2008)

Koerper and Chace confirm the approximately 10-inch diameter Universe Effigy was most likely used for female rights of passage by the Tongva, who lived throughout present-day Huntington Beach.  The incised lines in a butterfly-like pattern at the top of the Effigy has 28 notches, which the Bowers' plaque notes "conforms to a lunar cycle of 28 days." 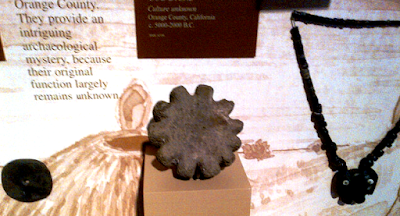 Scholars believe the effigies were purposefully buried some distance from villages and unearthed for sacred ceremonies.  A cache of a dozen universe effigies was found circa 1940 in San Mateo Canyon, near the border of south Orange County, on farmland worked by Japanese American truck farmer Frank Wada.  Wada was trenching for a water line and estimated the effigy cache was found at a depth of about five to six feet.

As a side note, Frank Wada emigrated to the U.S. from Japan in 1922 at the age of 13.  The Wada family left Orange County for Idaho at the start of World War II to avoid incarceration.  What began as a small family farm enterprise in Orange County grew to become one of the largest growers in the potato industry.  (See Wada Farms at http://www.wadafarms.com/farm/history.html).
The Universe Effigy is displayed next to a "cogged stone"--another star in the Tongva universe--found in "highly concentrated" numbers in archaeological sites ORA 83 in the present-day Bolsa Chica wetlands of Huntington Beach and ORA 58 in Costa Mesa. The only other place in the world they have been found to-date is central Chile, South America. 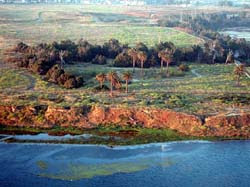 LEFT: The Bolsa Chica mesa--along the western edge of the former Wintersburg--is now part of the Bolsa Chica Ecological Reserve.  Close to 200 human remains, hundreds of cogged stones, and thousands of artifacts were unearthed by a housing developer adjacent to the preserved portion of the mesa.  (Photo by Connie Boardman, Sierra Club, angeles.sierraclub.org)

Over 1,000 cogged stones have been found on the Bolsa Chica mesas, a known burial site for the Tongva and an area of the peatlands later populated by farmers, cattle, and duck hunting clubs.   See cogged stones in the Bowers Museum collection at http://bowersmuseum.blogspot.com/2008/01/objects-of-week-cog-stones.html

In the Proceedings of the Society for California Archaeology (Vol. 19, 2006), scholars note the Huntington Beach cogged stones indicate manufacture "sometime within the seventh through eighth millennia B.P." (in archeo speak that means roughly 5,050 and 6,050 BCE).   As has been noted by local residents, the "Cogged Stone Site" is older than Egypt's pyramids, the United Kingdom's Stonehenge, the Great Wall of China, and the monumental statues of Rapa Nui, Easter Island--all UNESCO World Heritage sites.

The "Keystone Cache" of about 17 cogged stones was found in 2006 at the Bolsa Chica mesa during grading in an area previously disturbed by an agricultural irrigation line and World War II era electrical facilities.  Finding Tongvan artifacts in areas thought to be damaged or depleted by prior use has occurred with regularity.

The Society for California Archaeology paper reports some scholars theorize cogged stones may be representative of celestial bodies, such as stars.  Interesting speculation, considering the Tongva created multiple representations of portable cosmos---including multi-holed, flat stone tablets found on another Wintersburg ranch (in the Bowers Museum's Aldrich Collection)---and considering their spiritual affinity for stars as noted in Chinigchinich by Friar Geronimo Boscana (1846). 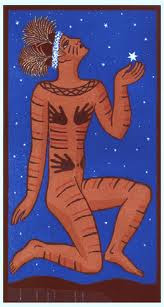 Wintersburg Village's prehistory has presented itself frequently during the agricultural and development phases of the 20th and 21st centuries.  Not all artifacts made their way into recorded curatorship.  Self described "collectors" and traders in "antiquities" in the early 20th Century unearthed thousands of items about which we may only know a fraction (stay tuned for a future post about a spectacularly shocking plunder of a Wintersburg Village burial ground in 1930).

Schumacher---whose work included excavations in Santa Catalina Island---was collecting under the umbrella of "Special Explorations" for the Peabody Museum with Harvard University and the Smithsonian Museum.  The Peabody Museum's annual trustee meeting reported in 1876 that "Mr. Paul Schumacher, who, probably, of all collectors has made the most extended and important investigations of the old shell heaps and burial places on the coast of Oregon and California" had collected, along with numerous grave artifacts "about thirty human crania in good condition, the perfect or nearly perfect skeletons of two or three individuals, and parts of others."

And, it's not over.  The California State University - Long Beach (CSULB) Daily 49er was among local media reporting in 2008 and 2009 on the unearthing of close to 200 sets of human remains and approximately 5,000 artifacts on the Bolsa Chica mesa by a housing developer.  By the time the discovery of human remains and artifacts became known, they had been boxed and set aside in a contractor trailer, the dead separated from their funerary possessions.

CSULB associate professor of anthropology Carl Lipo, commented that the Bolsa Chica findings "reflect that there was an interesting, diverse and substantial" ancient community.  Read the full article, Ancient history underground, at http://www.daily49er.com/2.292/ancient-history-underground-1.90836#.T5WyaNmZbfy.

What else ancient lies beneath the peatlands---and whether or not we know what to do with it when we find it---remains to be seen. 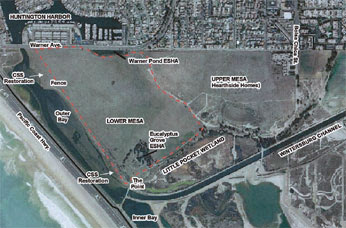 LEFT: Annotated aerial photograph of the Bolsa Chica showing Warner Avenue (formerly Wintersburg Avenue) north of the wetlands, the Wintersburg Channel, as well as the upper and lower mesas.  The reference to "Little Pocket" wetland is a translation of the name, Bolsa Chica.  (Photo, California Fish and Game, dfg.ca.gov)

© All rights reserved.  No part of the Historic Wintersburg blog may be reproduced or duplicated without prior written permission from the author and publisher, M. Adams Urashima.
Posted by Surf City Writer at 4:30 PM