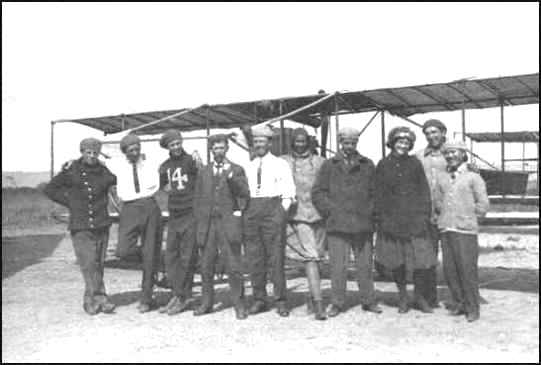 ABOVE: Members of the Curtiss Flying School, Class of 1912, including Koha Takeishi (far right), for whom Wintersburg and Smeltzer residents bought a plane.  Students working toward their Aero Club of America pilot's license paid $1 per minute for the 400-minute course.  The Curtiss school opened October 20th for the 1911-1912 winter season. (Photo, EarlyAviators.com)

The peatlands aviator
Koha Takeishi had become acquainted with some of the peatlands' prominent residents during his breaks from Utah State University.  A student from Japan, he worked as a laborer in the celery fields of Wintersburg and Smeltzer (both present-day Huntington Beach) to make extra money for school.

In addition to his studies, Takeishi worked at the Rokki Jiho (Rocky Mountain Times) Japanese-language newspaper in Utah.

Takeishi also arranged to attend the Curtiss Flying School in San Diego County--at the time, a competitor of the Wright Brothers flying school--receiving his pilot's license by the end of 1912 in a small, diverse class with international students, including Mohan Singh from India and Julia Clark, knicknamed "Bird Girl."  Takeishi was the third Japanese civilian pilot to receive his license and became a source of community pride for Japanese Americans in the peatlands of Orange County. 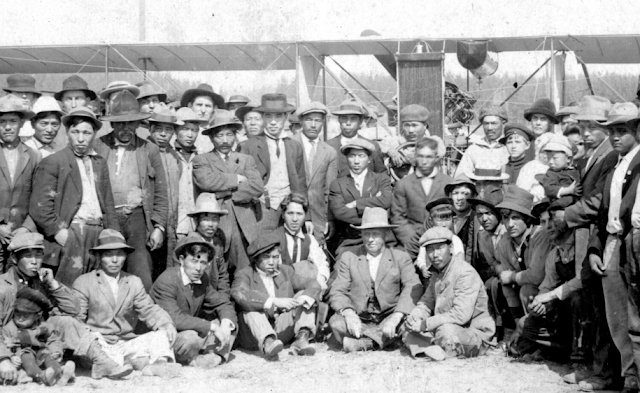 ABOVE: Members of the Smeltzer Flying Company and farmers from around the countryside, dressed in their Sunday best, gather for a group photo in a Wintersburg field. Takeishi is at center, wearing a beret, gripping the airplane's control wheel. (Photo snip of larger image taken by Charles Furuta, March 1913, courtesy of Furuta family) © All rights reserved.

"He did not have much money," recalled Akiyama.  "So during the celery harvesting time, he came to work at a celery farm and stayed in one of the labor camps. That's how he became acquainted with the other Japanese in Orange County." 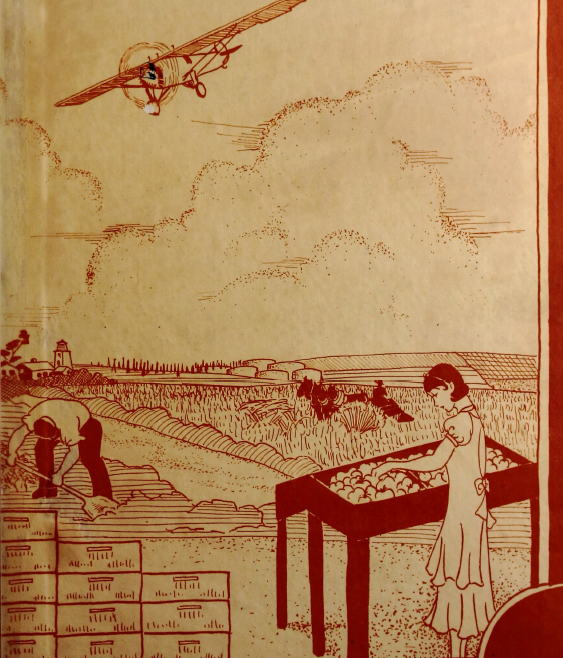 Takeishi worked out of Tsuneji Chino's agricultural labor camp, reported to be near present-day Springdale Street and Warner Avenue in north Huntington Beach.  Chino was an educated man and his camp attracted students on break from school.  Chino also was associated with Reverend Hisakichi Terasawa and the Wintersburg Japanese Presbyterian Mission, many of his laborers attending the Mission due to his encouragement.

Akiyama reported the college students "...lived the same sort of life as other Japanese laborers. But because they were students, they didn't stay long--sometimes one or two weeks, sometimes for a month. And if they got money, they went back to school. As long as they were in the camp, they ate the same food and worked like other Japanese."  Takeishi stood out because of his aviation skills. 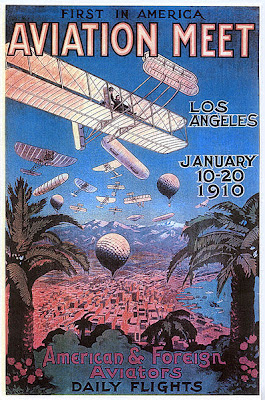 LEFT: American aviator Glenn Curtiss, Curtiss Aeroplane and Motor Company, was at the first American airshow at Dominguez airfield in 1910, along with French aviator Hubert Latham.  Takeishi received his pilot's license from the Curtiss Flying School in San Diego, before becoming the focus of the Smeltzer Flying Company.  He flew from Dominguez airfield to Wintersburg in March 1913.

Koichi Terahata, a key member of the local Japanese Association, and Tsurumatsu "T.M." Asari--a Wintersburg landowner, founding member of the Wintersburg Japanese Presbyterian Mission, and goldfish farmer--"talked to the Japanese in the county and asked them to buy stock of a new flying company," remembered Akiyama.

"So each one invested $25 in stock payment and a company was formed," continued Akiyama.  "Mr. Asari became the president of this company, which was named the Smeltzer Flying Company."

Akiyama explained the Smeltzer Flying Company was not profit motivated, "...to have a Japanese pilot was what all the Japanese were proud of and they decided to support... Mr. Takeishi, by forming a company."

ABOVE: A Curtiss Model D biplane.  In January 1910, Glenn Curtiss was a central figure in the first American air meet at Dominguez airfield in Los Angeles County. (Photo, Wiki Commons)

Terahata, Wintersburg's Asari, and other Japanese living near Smeltzer and Wintersburg organized a support group for Takeishi, raising $4,000 to buy a custom-made airplane for him (an equivalent of over $90,000 in 2012).

Hansen's oral history includes the notation that Southern California Japanese, 1956, reported Takeishi successfully flew a plane from the Dominguez airfield to Wintersburg in 1913.  This account is further documented by photographs taken by Wintersburg's Charles Furuta on the day of the flight, his bride of several months, Yukiko, in the crowd that gathered to watch.

Takeishi's Smeltzer Flying Company in Orange County raised more money to send him to the commercial first air show in Japan later in 1913, sponsored by Osaka Asahi newspaper.  It would be his last flight. 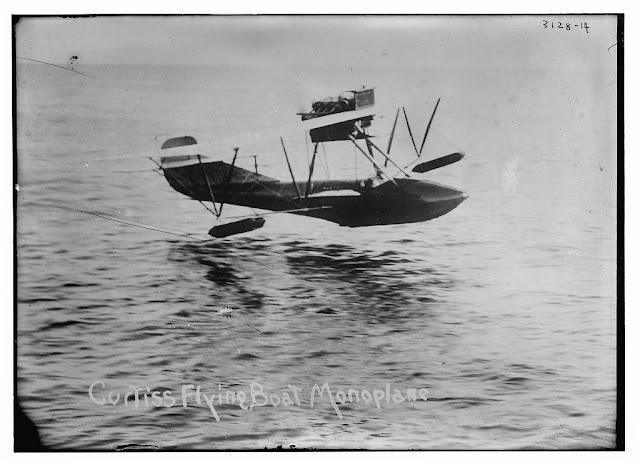 ABOVE: Curtiss "flying boat" monoplane, circa 1910-1915, at the dawn of California's fascination with flying machines.  (Photo, Library of Congress)

Last flight of the White Dove
The New York Herald, reporting from Tokyo, May 2, 1913, summarized the tragic event, "The Japanese aviator Takeishi, who recently returned from the United States, was killed at Osaka this afternoon. He had a successful flight from Osaka to Kyoto and was on his return. His skull was fractured while he was attempting to alight.  Takeishi Was Well-Known in Pacific Coast Cities as an Aviator."

Popular Mechanics magazine reported in November 1913 on Takeishi's funeral in Japan, "The funeral of Koha Takeishi, the Japanese airman who was killed near the Fukakusa Parade Grounds in the Japanese city-to-city flight, was the occasion for an impressive procession in his honor at Osaka recently.  The airman had just returned from America and at the time of his fatal accident had nearly accomplished the city-to-city flight in a monoplane named 'Shira-Hato' or 'White Dove.'  His flight attracted nationwide interest in Japan." 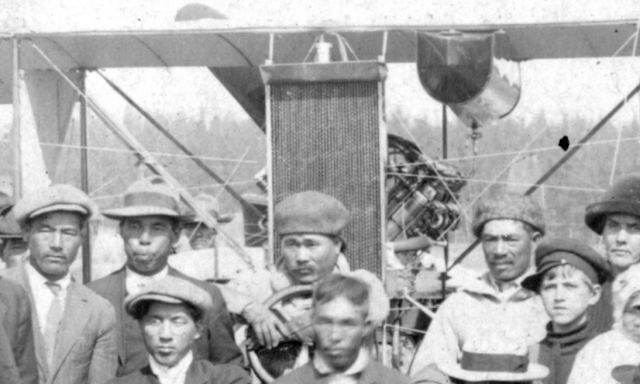 ABOVE: A close-up image of Koha Takeishi on the day of his flight into Wintersburg.  Charles Furuta documented the flight with his box camera, his bride, Yukiko, watching in the crowd. (Photo snip of larger image taken by Charles Furuta, March 1913, courtesy of Furuta family) © All rights reserved.

Reviewing the prior year's aviation accidents in a 1914 edition, Popular Mechanics noted there were more airplane deaths in 1913--a total of 192--"than in all the years before 1912, since the Wrights made the first public flights in a heavier-than-air machine..."  Their report contained a list of aviator deaths and included the name of Koha Takeishi.

During his 1982 oral history interview, then 94-year-old Henry Akiyama showed Hansen a photograph of Takeishi taken in 1913, before he left for Japan.   A reminder of his small farming community's once-hopeful venture into aviation: the Smeltzer Flying Company. 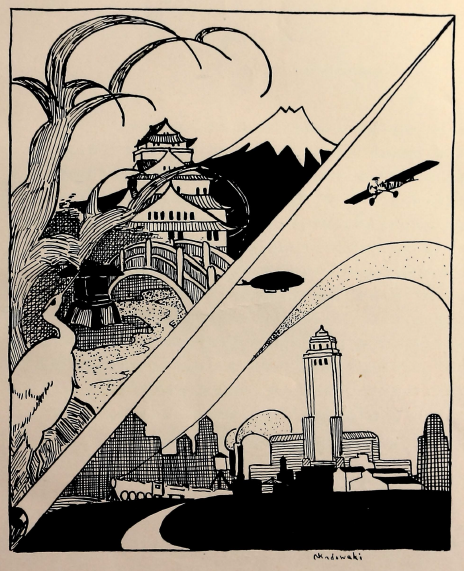 LEFT: An illustration from the 1933 publication, Echo, acknowledges the transition of culture and technology, from Japan to America, from the Issei generation to the Nisei generation. Echo was produced by the Young Men's Association, part of the Smeltzer Japanese Association in Orange County. (Image, Echo, 1933) © All rights reserved.

More details and images of the Smeltzer Flying Company are in my book, Historic Wintersburg in Huntington Beach (History Press 2014).

© All rights reserved. No part of the Historic Wintersburg blog may be reproduced or duplicated without prior written permission from the author and publisher, M. Adams Urashima.
Posted by Surf City Writer at 11:37 AM