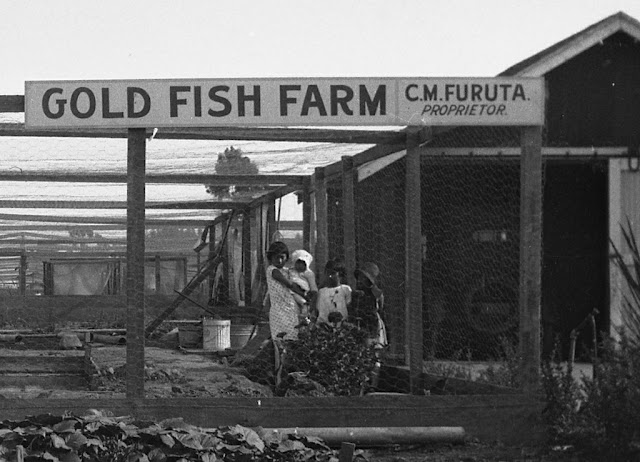 ABOVE: Toshiko Furuta holds her sister, Grace, with Kazuko and Etsuko Furuta, near the Wintersburg Avenue frontage of the Gold Fish Farm, circa 1928.  The children are east of the barn, behind the Furuta bungalow.  An automobile can be glimpsed just inside the barn.  Yukiko Furuta recalled her husband buying a Chevy, in which she was a little nervous to ride at first.  (Photograph courtesy of the Furuta family) © ALL RIGHTS RESERVED.

Did you ever wonder why goldfish and koi ponds have been a long tradition in landscapes around Orange County?  Most likely, the trend owes its roots to Wintersburg.

One of Wintersburg's most unique business enterprises were the goldfish farms, all owned by Issei (Japanese immigrants).  While there was a long history of goldfish farming in Asia, this was a fairly new enterprise for America.  The glittering fish delighted the American public and ignited a trend that remains popular today.

By the 1920s, Charles M. Furuta had established goldfish ponds on his property in Wintersburg, with help from his brother-in-law, Henry Kiyomi Akiyama.  Henry Akiyama had tried a small goldfish pond as a hobby and found the fish multiplied easily. 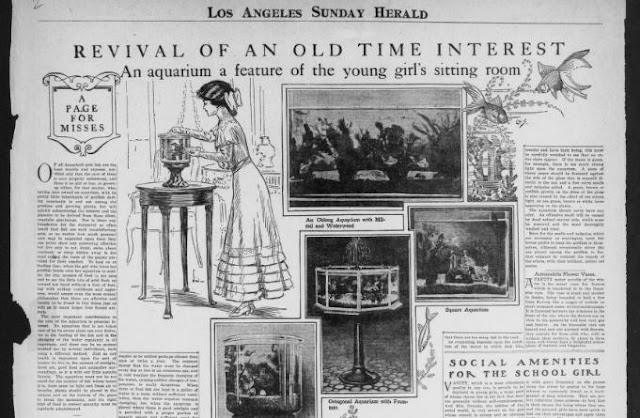 ABOVE: Goldfish have been bred in captivity for more than 1,500 years according to the Goldfish Society of America.  They reportedly made their way into the United States by at least the mid 1800s--perhaps earlier--and the public never lost their fascination.  This 1909 feature in the Los Angeles Herald describes goldfish aquariums as an "old time interest." (Image, Los Angeles Herald, January 17, 1909)

C.M. and Yukiko Furuta and Henry and Masuko Akiyama had been working and living in a large house on the Cole Ranch, off present-day Wintersburg (Warner) Avenue and Gothard Avenue.  The Cole Ranch is within short walking distance of the Furuta farm site and is the site of present-day Ocean View High School.  The Furutas were saving money while working on the Cole Ranch in order to develop their own property.

The first goldfish ponds
The Furutas moved back to their property around 1914-1915 and began working the farm site.  Henry Akiyama and his wife, Masuko (Yukiko Furuta's sister), began living in a small house C.M. Furuta previously had moved to his property (once lived in by the Terahata family). The goldfish ponds on the Furuta property may be the first commercial goldfish ponds developed in Orange County.

The only other major goldfish business Henry Akiyama knew of was in Los Angeles. (Editor's note: by 1928, Orange County City directories show a few stores in Santa Ana and Costa Mesa selling a variety of birds, cages, goldfish and aquariums, including "the pioneer bird man of Orange County," the Orana Bird and Goldfish Company in Santa Ana.)

The farmers took barrels of goldfish to Orange County, Long Beach and Los Angeles buyers, and later, goldfish were shipped in barrel containers by train to buyers around the country.  (Read about an early mishap trucking goldfish, Goldfish on Wintersburg Avenue part 1, http://historicwintersburg.blogspot.com/2012/02/goldfish-on-wintersburg-avenue.html)

A walk on the Furuta Gold Fish Farm
Henry Akiyama recalled some of his relatives in Japan had raised koi (carp) and had watched their farming practices.  When his hobby pond proved successful, he and C.M. Furuta increased the pond acreage at the Furuta farm site to cover three or more acres of the five-acre site.  The rest of the acreage included the Furuta home, Wintersburg Japanese Presbyterian Mission complex, and food and flower crops.

The Furuta Gold Fish Farm ponds contained a variety of species, indicating local goldfish farmers were  specializing to accommodate growing market demands for the exotic fish.  In addition to the more common Comets, there were Black Moors, Fantails, Shubunkin, and Nymphs.  A fresh water well on the Furuta farm and a network of irrigation piping kept the pond acreage filled. 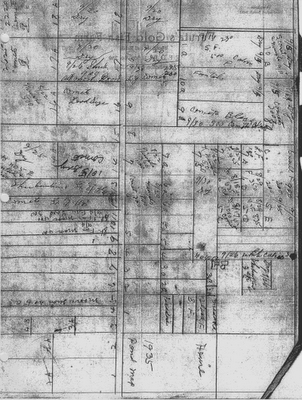 
The Furuta Gold Fish Farm continued to operate up until World War II.  President of the Smeltzer Japanese Association at the time, C.M. Furuta was incarcerated along with other community and religious leaders* at the U.S. Army's Lordsburg, New Mexico detention center while his family was sent to the Poston, Arizona Relocation Center.  He later joined them at Poston, after a year's separation.  During their confinement at Poston, the Furuta family rented their house to a local family and asked they maintain the ponds.  Upon their return from internment, their home was in fairly good condition however the ponds were dried up and filled with silt. 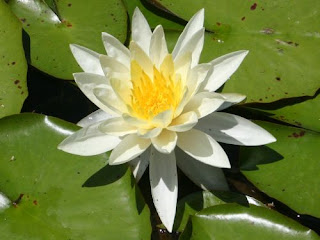 The Furutas did not restore the ponds for goldfish.  Instead, they recovered the former ponds' lily flower roots and began farming water lilies.

One of the rear additions on the Furuta barn holds what appear to be shallow sorting troughs.  Norman Furuta--grandson of C.M. Furuta and a graduate of Huntington Beach High School--recently said preparing cut water lilies is "a pretty labor-intensive process."

"Each flower had to be 'waxed' by my parents (Ray and Martha Furuta) by dripping a candle around the center of the flower while it was open," explained Norman Furuta.  "If this was not done, the lily completely closes when the sun sets, and doesn't open again until morning."

Norman Furuta notes his family's farm was "to the family's knowledge, the only source of cut water lilies in the United States during the last half of the 20th century. We were aware of other commercial sellers of water lily plants, but my father (Ray Furuta) said he wasn't aware of anyone else producing cut water lilies for commercial use."

During those years, area florists selling water lilies undoubtedly purchased them from the Furuta farm.   This crop, along with sweet pea flowers, proved to be a successful enterprise for the Furuta family from the post World War II years through the end of the 20th Century.

Identifying the fish on the Furuta Gold Fish Farm

Using the hand-drawn diagram of C.M. Furuta, we can identify some of the species of goldfish raised on the Furuta Gold Fish Farm. 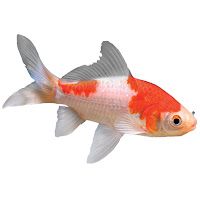 Fantails:  A Western form of the Ryukin goldfish species. 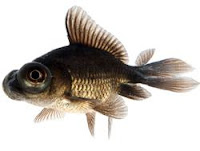 Moors:  Considered one of the "fancy" goldfish species, Moors have telescope or protruding eyes, referred to as kuro demekin in Japan. 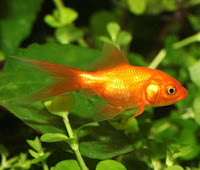 Nymphs:  Considered half "fancy" and half "common," and related to the fantail goldfish. 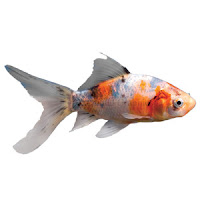 Shubunkin:  Typically splashed with calico pattern colors, the Shubunkin name translates as "red painted" or "red brocade."  The fish is said to have been first bred in Japan by Yoshigoro Akiyama by the early 1900s (unknown if he is related to Wintersburg goldfish farmer Henry Akiyama).  It is a popular outdoor pond fish that can grow up to a foot or more in length.

Paradise: Not a goldfish, a Paradise gouramis is a fish tolerant of most water conditions and can live in outdoor ponds.  It is an agressive fish and not usually put in the same aquarium or pond as goldfish.  Eating insects and larvae, it was an ideal mosquito fish.

One Huntington Beach resident recently remembered the Furuta farm as a wonderful garden filled with sweet pea flowers and water lilies.  Another resident who grew up in the Ocean View neighborhood near the farm recalls it as a magical place for local children.  Congregants at the Wintersburg Japanese Presbyterian Mission complex remember church carnivals held on the farm site.

While most Wintersburg farmers grew food crops needed for kitchens around the country, the Furuta farm cultivated beauty in the form of the living jewels and flowers wanted for our homes. 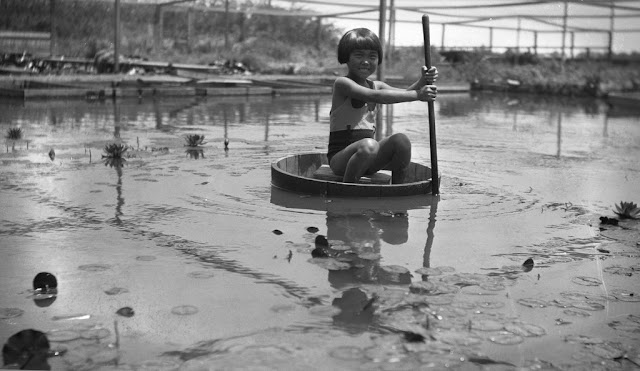 ABOVE: Grace Furuta, C.M. and Yukiko Furuta's daughter, on an adventure in the Furuta Gold Fish Farm ponds, circa 1935. (Photograph courtesy of the Furuta family)  © ALL RIGHTS RESERVED.

*No Japanese Americans were involved in wrong doing, as confirmed during Congressional hearings in the 1970s and 1980s. Those first interrogated, arrested and incarcerated typically were land owners, civic leaders, teachers and religious leaders. In Wintersburg Village, that included Charles Furuta and Reverend Sohei Kowta.

©  All rights reserved. No part of the Historic Wintersburg blog may be reproduced without prior written permission from the author, M. Adams Urashima.

Posted by Surf City Writer at 1:22 AM