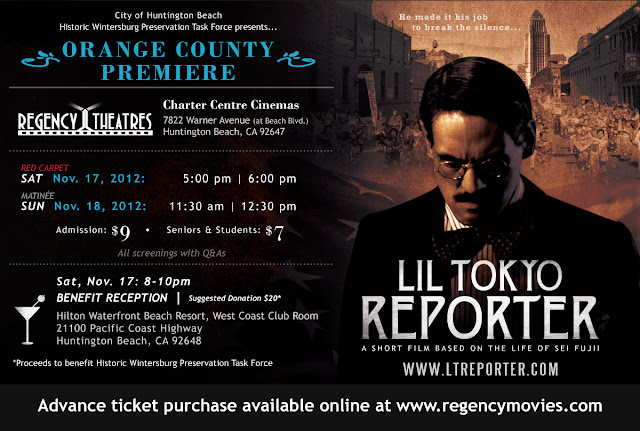 In a unique collaboration, the Little Tokyo Historical Society, along with the producers, director and cast of the new film, Lil Tokyo Reporter, are coming to aid the preservation efforts of Historic Wintersburg.

Sei Fujii, on whom the narrative film is based, must be smiling.

The Pacific Citizen describes Sei Fujii's life, "with Depression-era drama, violent run-ins with gangster gamblers, stabbings, shootings, Supreme Court battles, a dramatic death — and not just one, but two scandalous lovers — (his) life has the makings of a juicy soap opera, or at least an interesting documentary."

The story of Sei Fujii
Sei Fujii arrived in the United States in 1903.  Earning a law degree in 1911 from USC, he battled to protect Japanese American farmers, like those in Wintersburg.   Unable to practice law because he was a non-citizen, Sei Fujii started the newspaper, Kashu Mainichi, and began educating the Japanese community.

Through his newspaper, Sei Fujii warned farmers of gangsters running the Little Tokyo Club.   Many of the single, Japanese male farmers looking for a place to eat, drink sake and socialize were losing all their money in rigged card games.  Sei Fujii contronted the corruption, as relayed in Lil Tokyo Reporter.

What happened next has the makings of a great movie----and, it is real life.  The gangsters running the Little Tokyo Club tried to kill him.  Sei Fujii--trained in judo--fought them off and managed to survive.  Carol Fujita, one of the film's producers and a key researcher on Sei Fujii's life, said he was "found on Second Street near First in front of the New York Hotel by a pimp."  The pimp took him to the Japanese Hospital he had helped found in 1929.

Sei Fujii continued reaching out to the Japanese community to educate them and help them assimilate to American life.  He was known to travel to Orange County to meet with local farmers.

Upon his release in 1946, Sei Fujii famously purchased a small piece of land in Los Angeles County and challenged California's Alien Land Law of 1913.  Through his efforts--and that of his long-time law school colleague and friend, J. Marion Wright--the law was overturned by the California Supreme Court in 1952.  Two years later, and only 51 days after being granted U. S. citizenship, he died. 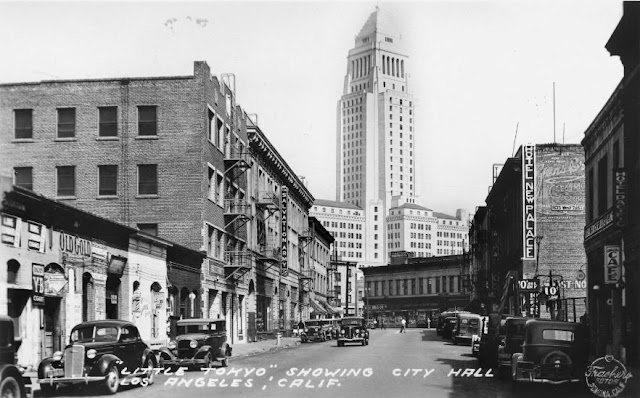 "Other people from (Wintersburg) went to Los Angeles often, mostly to buy clothes or to see movies, and some people visited their relatives," explained Akiyama.  "There was already an established Japan Town in Los Angeles, which wasn't yet called Little Tokyo; the people called it Nihonjin Machi at that time, and it was already the center of Japanese laborers, who stayed in Imperial Valley in May and moved to Fresno in July or to Smeltzer (next to Wintersburg in North Huntington Beach) in October to work on farms." 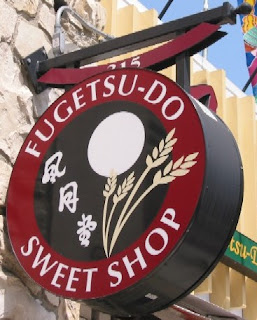 Yukiko Furuta remembered living in a hotel in Little Tokyo in 1912, while her husband, Charles Mitsuji Furuta, built their new home in Wintersburg.  New to America, she ventured out to  Fugetsu-do, a Japanese confectionary store, and went  back to the hotel room to enjoy the treats.  She recalled her husband leaving her money for sweets when he left for work in Huntington Beach.  Later, living in Wintersburg and a little more acclimated to America, Yukiko Furuta would ride the Pacific Electric Railroad into Little Tokyo for shopping.

Left: Fugetsu-do opened in 1903 and still exists in Little Tokyo, an historic, artisan sweet shop.  Now at 315 E. First Street, http://www.fugetsu-do.com/  The mochi is worth the trip.

"Let me tell you a little about that area during the time we lived there. Transportation in Little Tokyo was by yellow streetcar," relayed Nishizu.  "I remember that all fire engines were drawn by horses, not mechanical engines. There were two to three teams of horses in front of the fire engine which had a big water tank in the middle of the fire wagon. When there was a fire, the wagon rang a bell like the church bell."

"I was born in an apartment building on the southwest corner of Jackson Street and Central Avenue. On the south side of this street, just north of the present Los Angeles police station's parking lot, there was a two-story building with a big community hall, where they used to have shibai, Japanese shows," continued Nishizu, who moved to Orange County as a small child.  "I remember taking a box lunch, bento, like they do in Japan, and watching Kabuki plays."

"Gambling among the Issei was quite extensive. Most of the gamblers were the single Japanese farm workers who traveled up and down California working on farms. These workers used to call themselves “blanket katsugi” (blanket carriers)," said Nishizu.  "Frequently they lost all of their earnings to the professional Issei gamblers from Los Angeles, Fresno, Sacramento, and other cities where Japanese farm workers stayed between jobs." 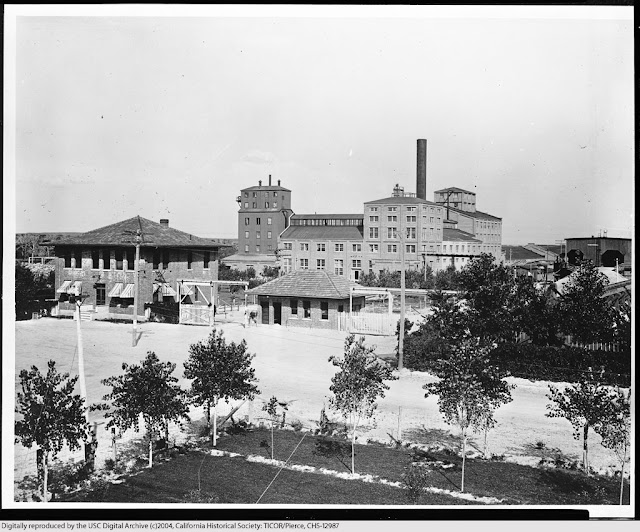 Wintersburg and Little Tokyo
Some of the children of Wintersburg's Issei farmers went on to help develop not only Orange County, but also Little Tokyo.   During his oral history interview, Clarence Nishizu remembered Yasuo Goto, who farmed 180 acres of sugar beets for the Holly Sugar Company.

"Goto was the father of  Dr. James Goto, M.D., who (maintained) a medical practice on East Second Street in Honda Plaza, part of the Little Tokyo district," recalled Nishizu.  "Dr. Goto has informed me that his father came to the Wintersburg area...and settled right next to Mr. Tsurumatsu Asari, the father of Harley Asari, who operated a goldfish farm on Warner Avenue east of Beach Boulevard..."(Note: this Honda Plaza area is now part of the Sawtelle Japantown district.)

Goto lived near and most likely knew all three of Wintersburg's goldfish farmers, including T.M. Asari, Charles Mitsuji Furuta and Henry Kiyomi Akiyama.

"(Yasuo) Goto first was in the labor camp business. He arranged room and board for many Issei laborers from Japan who worked in Orange County," explained Nishizu to interviewer Arthur A. Hansen.  "From the labor camps, he transported the laborers on wagons pulled by horses, of course, to different farms in the area. This was in about 1910. The next year, 1911, Dr. Jim Goto was born. Later, the senior Goto went into farming California chilies, celery, cabbage, melon, and other vegetables."

From farming roots, Dr. James Goto, went on to graduate from UCLA and then USC's medical school.  He set up his medical practice--West L.A. Medical-Dental Offices-- on the corner of Sawtelle and Mississippi, the former "Little Osaka", now designated Sawtelle Japantown, as of 2015.

The return of Sei Fujii to Orange County
Sei Fujii, yet again, comes to the aid of farmers.  The Orange County film premier of Lil Tokyo Reporter will help raise funds for preservation of Historic Wintersburg, the five-acre home and farm of Charles Mitsuji and Yukiko Furuta, and the Wintersburg Japanese Presbyterian Mission complex.  Screening times are 5 p.m. and 6 p.m., Saturday, Nov. 17, and 11:30 a.m. and 12:30 p.m., Sunday, Nov. 18.  The cast, director and producers will be at every screening.

All rights reserved.  No part of the Historic Wintersburg blog may be reproduced or duplicated without prior written permission from the author and publisher, M. Adams Urashima.
Posted by Surf City Writer at 3:43 PM