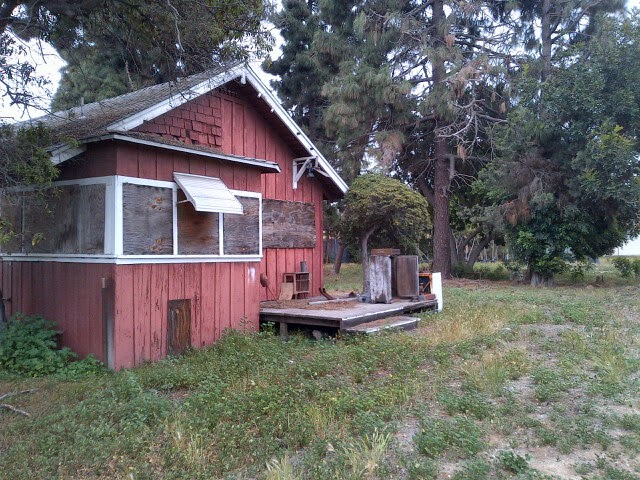 The south side with enclosed sun porch of the Furuta bungalow at Historic Wintersburg.  In February 1942, the F.B.I. came for Charles Mitsuji Furuta while he was working on the goldfish farm.  They investigated his closet and office in the sun porch, then took him to the Tuna Canyon Detention Station in Los Angeles County.  (Photo, April 18, 2014)

In late April 1942, Yukiko Furuta and her children had officially been warned they would have to evacuate California by mid May.  They had been given notice around April 14 to 16, and had begun to pack.

Charles Mitusji Furuta had already been taken to the Tuna Canyon Detention Station (Tajunga, Los Angeles County). Yukiko was faced with how to pack and store four decades of life in America. Those being evacuated had been told they could bring only one suitcase. 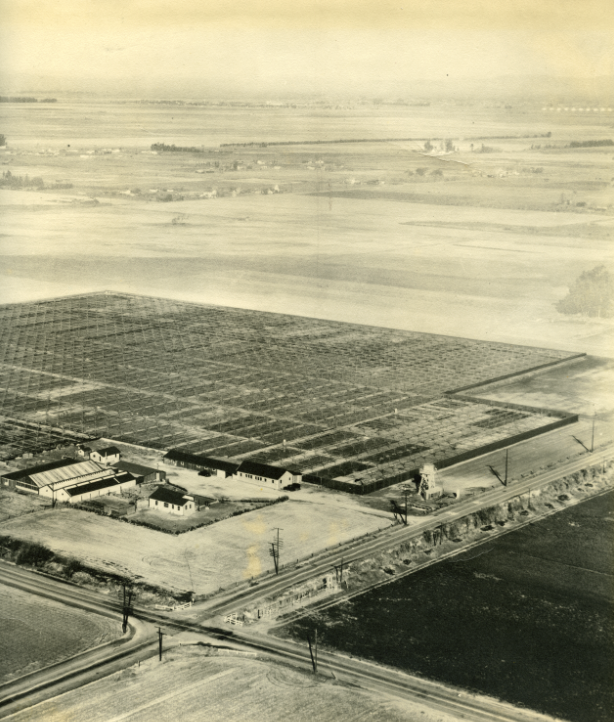 The Furutas would store belongings at the home of brother-in-law Henry Kiyomi Akiyama, at the Pacific Goldfish Farm located then at Goldenwest and Bolsa streets in nearby Westminster. Akiyama's Caucasian employees would watch over the property and manage the farm during his absence.  Another family would watch over the Furuta Gold Fish Farm in Wintersburg Village.

Right: The Pacific Goldfish Farm, at Goldenwest Street and Bolsa Avenue, located where the Westminster Mall is today, circa 1940s.  The farm contained 40 acres of goldfish farms.  It is estimated there were 100,000 to 200,000 fish by the time World War II started. (Photo courtesy of the Akiyama family and California State University Fullerton, Center for Oral and Public History, PJA Akiyama 1751) © All rights reserved.

Yukiko described the time before evacuation in her 1982 interview with Professor Emeritus Arthur Hansen for the Honorable Stephen K. Tamura Orange County Japanese American Oral History Project. The interview was conducted with the help of an interpreter, Yasko Gamo.

Yukiko Furuta:
The F.B.I. came to the church (the Wintersburg Japanese Presbyterian Church) to take Reverend (Sohei Kowta), but then (Kowta) said that all the husbands had been taken and the wives were having trouble. If he would be taken, no one would take care of them. So the F.B.I. agent called the office and talked to the people at the office. Then they decided not to take him. So he could stay in the Japanese community. 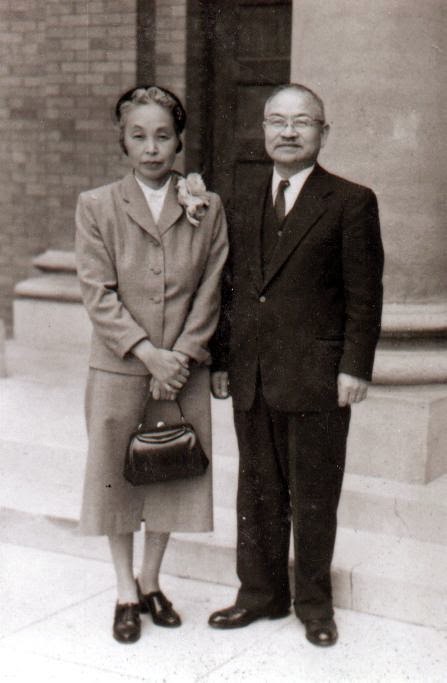 Left: Reverend Sohei Kowta* and his wife, Riyo, lived in the manse with their three children--Tadashi, Hiroko and Makoto--at the Wintersburg Japanese Presbyterian Church from 1938 until the time of evacuation in 1942.  He is credited in a U.S. government report with helping unify the religious groups at the Colorado River Relocation Center at Poston, Arizona.  Reverend Kowta also helped organize the Evergreen Hostel in Los Angeles for displaced Japanese Americans returning to Southern California in 1945. (Photo courtesy of Wintersburg Presbyterian Church) © All rights reserved.

They just stayed home with fear. They could not go out more than five miles from their homes. So they stayed home quietly.

In the evening they pulled the blind and shade and turned out the light and went to bed early. Her son (Raymond Furuta, a graduate of Huntington Beach High School) was engaged then (to Martha), so he told her that they were going to marry quickly because otherwise they might not be able to get married.

Arthur Hansen:
When her husband left, did somebody come to the door to pick him up?

Arthur Hansen:
Tell me about that. Did you know they were coming or not, then?

Yukiko Furuta:
They just came and knocked on the door, and when she opened the door there were three big men. They asked whether Mr. Furuta was there? Since he was working at the fish farm outside, she called him. 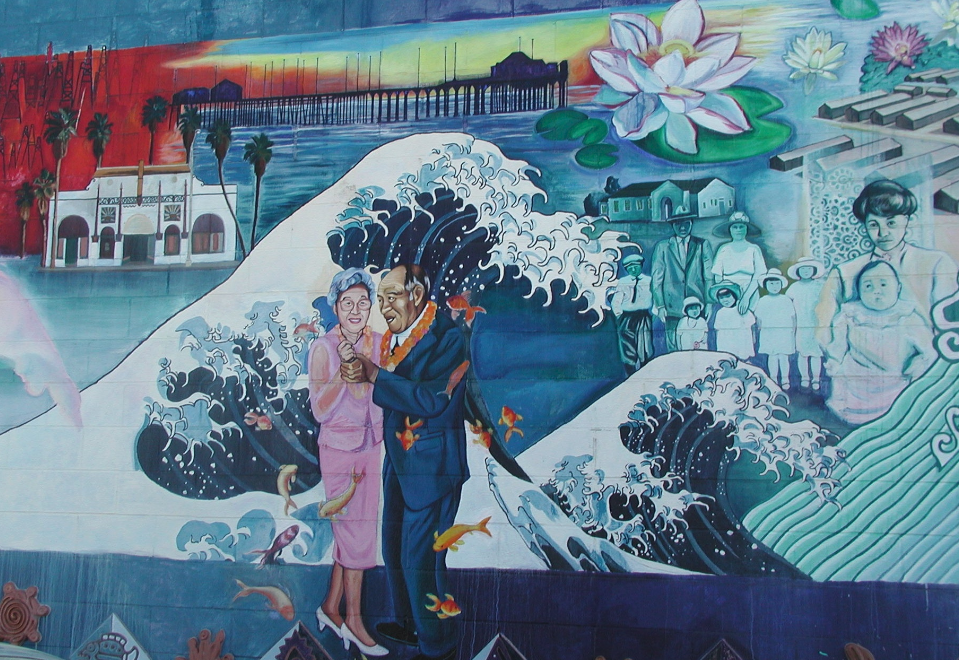 Right: A portion of a mural that once graced the Huntington Beach Art Center parking area, memorialized the Furuta family history.  At the center, Raymond and Martha Furuta surrounded by goldfish. To their right, an image from a 1923 photograph of Charles and Yukiko Furuta with their children, the 1934 Wintersburg Japanese Presbyterian Church behind them.  In the upper right corner, flanked by the lily flowers sold by the Furutas, the barracks of the Colorado River Relocation Center at Poston, Arizona. (Photo courtesy of the Furuta family) © All rights reserved.

Arthur Hansen:
It was during the day?

Yukiko Furuta:
Yes. So the F.B.I. men said they had come for Mr. Furuta.

For a while after Pearl Harbor, they were told they couldn't own guns or cameras or even flashlights. So they had to take them to the (Huntington Beach) city hall. So they already didn't have those things. 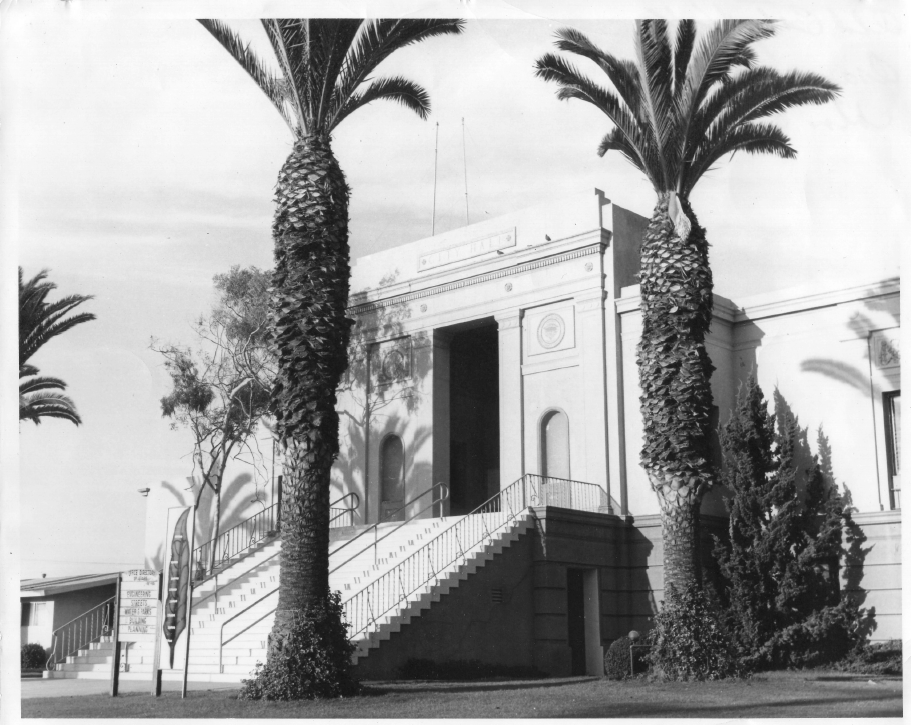 ...the F.B.I. agents came into the house and examined Mr. Furuta's desk and closet. They couldn't find anything in there.

Arthur Hansen:
...Which room was that? (the room which is now the sun porch in the rear of the interviewee's house)

Yukiko Furuta:
Since he had already packed his suitcase, he went then with the F.B.I. men.

Yukiko Furuta:
The agents waited while Mr. Furuta changed his clothing. And then they examined his baggage.

Arthur Hansen:
What kind of instructions did (Charles Furuta) give the family? 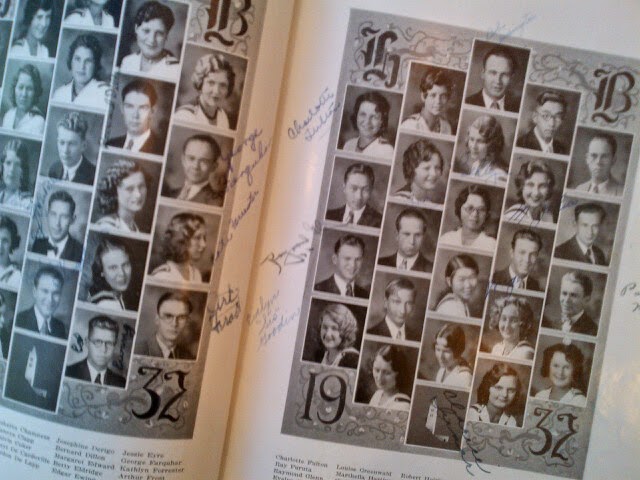 Left: Images of the senior class from Raymond Furuta's 1932 Huntington Beach High School yearbook, the Cauldron, his photo at center left on the right-side page. (Photo, October 2013) © All rights reserved.

Yukiko Furuta:
They might have talked to the children. But the children said, later on, that the F.B.I. men had made a joke to them. But they didn't give any particular instruction to her.

(Charles) said to (Yukiko) that in the long run their property might be confiscated because they were all enemy aliens; so the most important thing was that everybody was alive and well. And he didn't have much time to talk any further.

So later on they corresponded with each other. And one of the things she mentioned was written in one of his letters--that the family should evacuate with other Japanese.

And after staying there for one day...he was taken to Tujunga (the Tuna Canyon Detention Station), and she visited him at Tujunga two times. (Yukiko) had to go to Santa Ana and get permission to visit him...she could only talk for ten minutes to her husband through the fence. 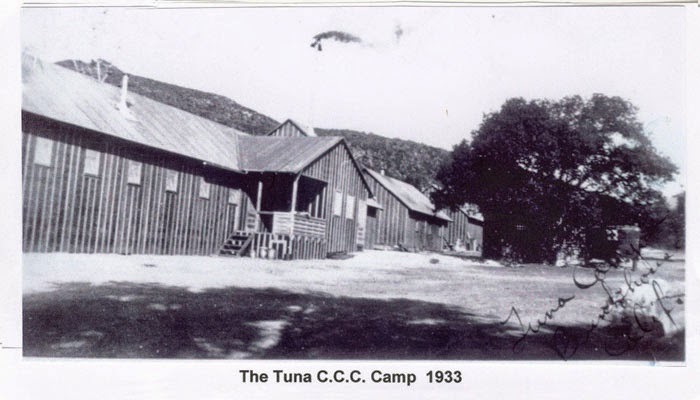 The Tuna Canyon Detention Station, circa 1933, was a former Civilian Conservation Corps camp used as a temporary detention facility.  Along with Charles Furuta, Gunjiro Tashima--owner of the Tashima Market across the street from the Mission in Wintersburg, and later, to Beach and Garden Grove Boulevard--was taken to Tuna Canyon.  Masayuki and Takayuki attended Huntington Beach High School. (Photo courtesy of the Densho Encyclopedia)

Seventy-two years later, with Etsuko Furuta
In a 2013 oral history interview conducted by Professor Emeritus Arthur Hansen on behalf of Historic Wintersburg with Etsuko Furuta Fukushima---Charles and Yukiko's daughter, now 93 and living in northern California---Tuna Canyon and the fence that separated their family is a vivid memory.

Arthur Hansen:
How do you feel about the whole thing of seeing your father on the other side of the fence?

Etsuko Furuta Fukushima:
I thought, "For heaven's sake, he couldn't be a spy," but then the F.B.I. were wrong.


By May 1942, the entire Japanese community, the Issei and American-born Nisei, were forcibly evacuated from Orange County and confined at what would be called detention or relocation centers in other states.

Everyone associated with the California pioneer property known today as Historic Wintersburg--the Furuta family of the Furuta Gold Fish Farm and the Wintersburg Japanese Presbyterian Mission's clergy and entire congregation--were removed from California.

Most were confined at the Colorado River Relocation Center at Poston, Arizona, and some at Gila River Relocation Center, also in Arizona.  Some families were separated, the men being taken to military or immigration detention centers in other states.  Charles Furuta would be separated from his family for a year, most of the time spent at the military detention center in Lordsburg, New Mexico.

For the next three years, the families of Historic Wintersburg would endure what would later be acknowledged through Congressional investigations as one of the largest civil liberties tragedies in American history.

Forty-six years after Executive Order 9066, President Ronald Reagan would sign the Civil Liberties Act of 1988 providing reparations to Japanese Americans.  During the signing ceremony, President Reagan would specifically talk about a Wintersburg Japanese Presbyterian Mission family, the Masuda family.  At the signing with President Reagan in Washington, D.C., another Wintersburg Japanese Presbyterian Mission congregant who had lobbied for the Act, Clarence Nishizu.

Read about the Reverend Sohei Kowta and his family, http://historicwintersburg.blogspot.com/2013/02/reverend-sohei-kowta-sunday-before.html

Read about the Tashima family, http://historicwintersburg.blogspot.com/2012/07/the-tashimas-of-wintersburg.html

Read about the Masuda family, http://historicwintersburg.blogspot.com/2012/06/masudas-national-civil-liberties-icons.html

© All rights reserved.  No part of the Historic Wintersburg blog may be reproduced or duplicated without prior written permission from the author and publisher, M. Adams Urashima.
Posted by Surf City Writer at 11:22 AM