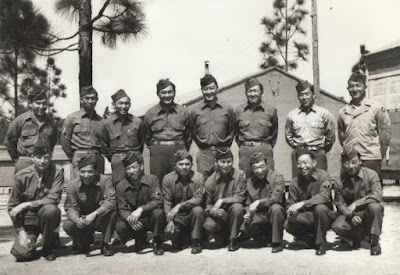 ABOVE: The "Go For Broke" 442nd, the highest decorated military unit in history. Kazuo Masuda can be seen in the center of the front row, fourth from left.  He was a Huntington Beach High School graduate, born in Orange County, California, and the Masuda family were congregants of the Wintersburg Mission.  (Photo courtesy of www.the442nd.org)

Kazuo Masuda and the Nisei who served in the U.S. military were remembered at a Memorial Day ceremony at Westminster Memorial Park.  The Masuda family story is important nationally, as this is the family specifically mentioned by President Ronald Reagan when he signed the Civil Liberties Act of 1988.

Kazuo Masuda will be one of three Nisei soldiers whose story will be featured in the upcoming Congressional Gold Medal Digital Exhibition by the Smithsonian Institute National Museum of American History.

Congregants of the Wintersburg Mission and farmers in Talbert (Fountain Valley), the Masuda family story can be found at http://historicwintersburg.blogspot.com/2012/06/masudas-national-civil-liberties-icons.html 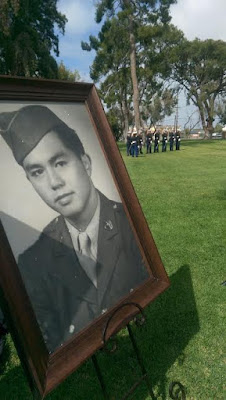 The following is a transcript of the speech presented by Dennis Masuda, Huntington Beach, California, a descendant of Kazuo Masuda and member of the Historic Wintersburg Preservation Task Force:

"Hate, discrimination, prejudice.  On this day, we should be talking about honor, sacrifice and heroes.  So let us talk about both.

Uncle Kaz, a man I never met but I know well.  Here is his story, the story of the Masudas, and the strong-willed Masuda women.

Born November 30, 1918, about a mile from here in Westminster, California, he was one of 11 children born to Gensuke and Tamae Masuda.

A graduate of Fountain Valley Elementary School  in 1932 (Note: Fountain Valley was still known as Talbert at that time) and Huntington Beach Union High School in 1936.  Football, track, swimming and basketball.  He was only 5’4”! 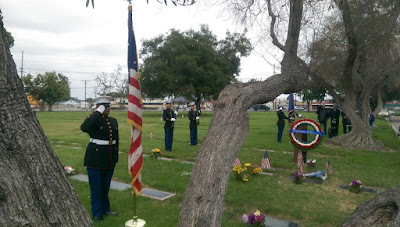 ABOVE: Orange County-born Staff Sergeant Kazuo Masuda, a member of the "Go For Broke" 442nd, killed in action in Italy during World War II.
(Photograph, M. Urashima, May 25, 2015) © All rights reserved.

When I was about five, I remember my Dad and Uncle Mas looking through a picture album. I saw pictures of the family when everyone was much younger.  Then there was a picture of Uncle Kaz. Who was that I asked?  It was explained to me he was my uncle and that he died in the war.  At five years old, you really don’t have a concept about death or war. 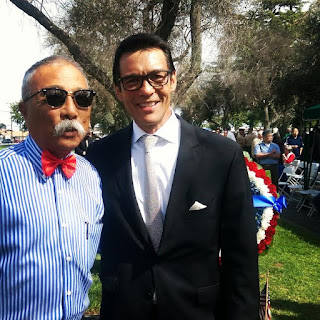 I also noticed pictures of the family at places I didn’t recognize.  It was explained to me that it was at a camp in Arkansas.  I remember thinking my family went camping at a tar paper garage in Arkansas?  It wasn’t until years later that I found out what camp actually meant.  (Editor's note: This reference is for the Jerome Relocation Center in southeastern Arkansas.  The Masudas later were sent to the Gila River camp in Arizona.)

On October 17, 1941, Uncle Kaz was drafted into the military. Because of his dark skin, his buddies gave him the nickname, 'Arab,' which wouldn’t be a great nickname if serving today.

While training at Fort Ord, the attack on Pearl Harbor happened.  Then the discrimination began even in the military.  He was passed over for the signal corps because he was of Japanese descent. 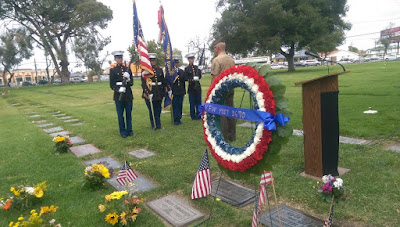 RIGHT: The honor guard stands ready, preparing for the Memorial Day recognition at the grave site of Kazuo Masuda.  Many of the Wintersburg Village's Japanese pioneer families are nearby, due to last century's segregation at the cemetery. (Photograph, M. Urashima, May 25, 2015) © All rights reserved.

Right after Pearl Harbor, my grandfather as well as thousands of other Issei were rounded up and detained for months before being returned to their families.

February 19, 1942, Executive Order 9066 was signed and the internment process began. 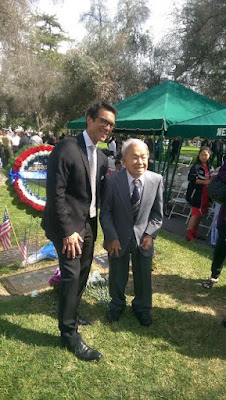 For Japanese Americans, they were about to fight two wars: one against the Axis Powers in Europe, and the other, hate, discrimination and prejudice at home.

Many young Japanese American men volunteered for military duty.  If you look at the Japanese situation, they had to volunteer to fight because if they didn’t, there would have been a lot of fingers pointing and people saying they didn’t care about America.

Uncle Kaz said in a letter, “I and the rest of the combat team know what we are fighting for.  It is for us, our future in America.”

It was as the Japanese say, “for the sake of the children.”

Uncle Kaz was a risk taker, according to his comrades.  On one occasion, he stopped an attack and forced the advancing troops to retreat with him just using a mortar on a midnight patrol on August 27, 1944.  Uncle Kaz encountered a German machine gun at a distance of six feet.  He opened fire with his Thompson sub machine gun while two of his comrades escaped.  This was Uncle Kaz’s last stand. 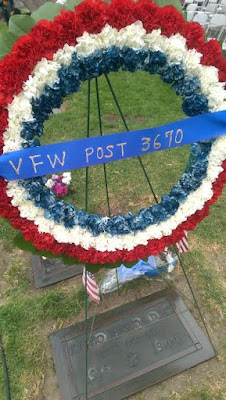 A few days later, on September 1, they found his body.  His buddies recalled Uncle Kaz always said, “Not a step back.  Never, you can’t win by going backward.”

RIGHT: The wreath placed by the Kazuo Masuda VFW Post 3670 at the grave site of Kazuo Masuda at Westminster Memorial Park. (Photograph, M. Urashima, May 25, 2015) © All rights reserved.

On September 11, 1944, the dreaded Western Union telegram arrived at the relocation camp in Arkansas.  “The Secretary of War desires me to express his deep regret that your son, Staff Sgt. Kazuo Masuda, was killed in action on 27th August in Italy.”

But, the war didn’t end there for the Masudas.  Uncle Takashi was still in Italy.  Uncle Mas was in military intelligence ready for the invasion of Japan as an interpreter.   Victory in Europe came in 1945 and victory over Japan came in August.  But for the Japanese Americans, the war on hate, discrimination and prejudice was not yet won.

The next battle was fought by Aunt Mary.  She was bullied not to return to their home in Talbert.  But she held fast and returned September of 1945.  A victory for Aunt Mary and the Masuda women.

In December 1945, General Joseph Stillwell came to the farmhouse in what is now Fountain Valley and presented the Distinguished Service Cross to my Aunt Mary.  There was also a rally at the Santa Ana Bowl and a fortuitous meeting with a young captain named Ronald Reagan.  My grandmother refused to take the medal from General Stillwell, but did accept it from my Aunt Mary.  Another little victory for the Masuda women. 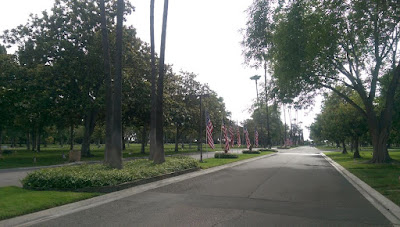 Uncle Kaz had one more battle to fight.  His body was returned stateside on November 9, 1948.  When the request for him to be buried at Westminster (memorial park), they said he would have to be buried in a dirt area in the far corner of the cemetery because it was a Caucasian cemetery.  Amid protests from various groups, the cemetery relented and he was buried here.  At that time, it was still away from the main cemetery.  If you look around, you’ll see many Japanese surnames here.  How ironic is it that now this spot is right near the middle.

When President Reagan was thinking about signing the Civil Liberties Act of 1988 and the redress to compensate the Japanese Americans, it was my Aunt June who wrote a letter to President Reagan reminding him about his speech some 43 years earlier at the Santa Ana Bowl and about Uncle Kaz. 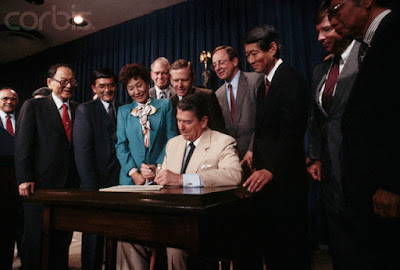 RIGHT: President Ronald Reagan signing the Civil Liberties Act of 1988. Present at the signing was a member of the Masuda family and Clarence Nishizu, another Wintersburg Mission congregant who had worked for the passage of the Act. (AP photo)

In that speech he said, 'Blood that has soaked into the sands is all one color. America stands unique in the world, the only country not founded on race, but in a way, an ideal.'  The President soon signed the bill after getting Aunt June’s letter.  Another victory for a Masuda woman. 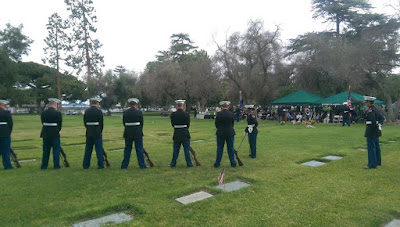 LEFT: The military guard stands in respect, as the crowd gathers for the Memorial Day event. The guard provided a 21-gun salute during the ceremony for Kazuo Masuda, held in the cemetery that had segregated his burial in 1948, when his body was returned home. (Photograph, M. Urashima, May 25, 2015) © All rights reserved.

About every 20-30 years, hate, discrimination and prejudice has a new victim in America.  In the 1860s, it was the Chinese; the 1880s, it was the Irish; the 1900s saw the Italians as victims; the 1940s, it was the Japanese.  Mid ‘70s to ‘80s, it was the Vietnamese and after September 11, 2001, anyone from the Middle East or that believed in Islam felt the wrath.  After 9/11, the familiar calls to send them back or round them up and incarcerate them were heard again. 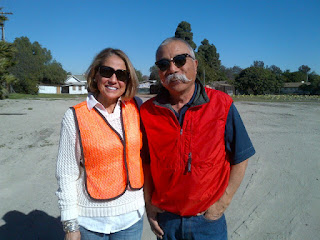 Hate, discrimination, prejudice.  If we don’t get rid of these, the next group that may be targeted could be yours.

Thank you for listening and for being such great Americans."

Our appreciation to Dennis Masuda for sharing his remarks and for his ongoing insight and support for the Historic Wintersburg preservation effort.  The Masuda family story and their role in President Reagan's signing of the Civil Liberties Act of 1988 is part of the history represented by Historic Wintersburg, which if preserved, can be shared in a tangible way with future generations.

All rights reserved.  No part of the Historic Wintersburg blog may be reproduced or duplicated without prior written permission from the author and publisher, M. Adams Urashima.
Posted by Surf City Writer at 1:49 PM