ABOVE: A 21-gun salute in honor of all fallen veterans at the VFW Post 3670 Kazuo Masuda Memorial Day program at Westminster Memorial Park. (Video, May 30, 2016 M. Urashima) © All rights reserved.

Historic Wintersburg in Huntington Beach author and preservation task force chair, Mary Urashima, was asked to speak at the annual  Kazuo Masuda Veterans of Foreign Wars Post 3670 program on Memorial Day.  It is an honor to be part of this day, recognizing the remarkable men and women fallen in their service to our country.  This event---which bears the name of Congressional Gold Medal and Distinguished Service Cross recipient Kazuo Masuda---honors, in particular, the Nisei soldiers of World War II and all service men and women who have fallen in the line of duty.

An excerpt of her remarks:


"...This is a chapter of our country’s history we are reminded of today, as we stand near the grave of Kazuo Masuda, whose family was incarcerated during the time of his service.  Four of the Masuda brothers served during World War II.  Kazuo was awarded posthumously in 1945 the Distinguished Service Cross for extraordinary heroism in action. 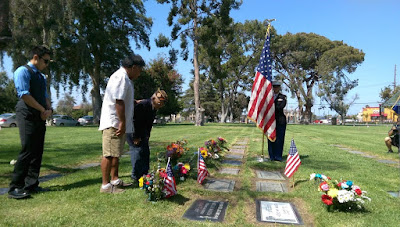 RIGHT: Marvin Masuda (second from left) lays flowers at the grave of Kazuo Masuda, with his father, Masuo Masuda (center). Masuo Masuda is the brother of Kazuo Masuda and also a WWII veteran.  Both were Huntington Beach High School graduates. (Photo, M. Urashima, May 30, 2016, Westminster Memorial Park) © All rights reserved.

On July 6, 1944, when his observation post became the target of heavy mortar and artillery fire, Staff Sergeant Masuda crawled 200 yards to the mortar section, secured a mortar tube and ammunition, and returned to the observation post.

Using his helmet as a base plate, he single-handedly directed fire at the enemy for 12 hours, repulsing two enemy counter-attacks.


A month a half later, on August 27, 1944, he voluntarily led two men on a night patrol across the Arno River and through the heavily-mined and booby-trapped north bank.  Hearing movements, he ordered his men to cover him while he crawled forward. He discovered that they had been surrounded.

Kazuo Masuda ordered his men to withdraw while he engaged the enemy.  At the sacrifice of his life, he enabled them to escape.  Kazuo Masuda’s family would hear of his death, while confined at Gila River. 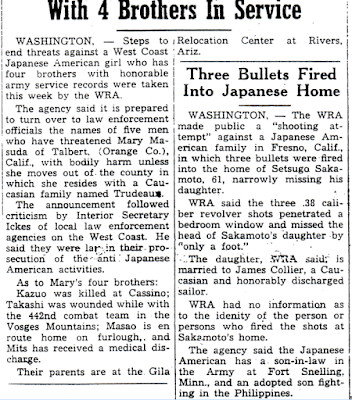 LEFT: A news clipping from 1945 announces the War Relocation Authority had taken "steps to end threats against a West Coast Japanese American girl who has four brothers with honorable army service records."  The article is paired with another article noting the reception received by a northern California Japanese American family attempting to return home after WWII confinement.  Acts of violence and vandalism toward Japanese Americans were widely reported and the return home was difficult, for those who chose to return to their prior home. Many lost their properties or chose not to return after WWII confinement.

The return of the Masuda family to Orange County in 1945 was not easy. Kazuo’s sister, Mary Masuda was confronted with threats of violence. Hearing this, the War Relocation Authority issued a national bulletin against such acts, reminding the public these were American families returning home.

General Joe Stillwell, determined to make a statement, traveled to the Masuda’s farmhouse in Talbert to present posthumously the Distinguished Service Cross.  It was on the front page of the Los Angeles Herald on December 9, 1945, and carried by the news reels of the day.  With General Stillwell, was a young Army captain, Ronald Reagan. 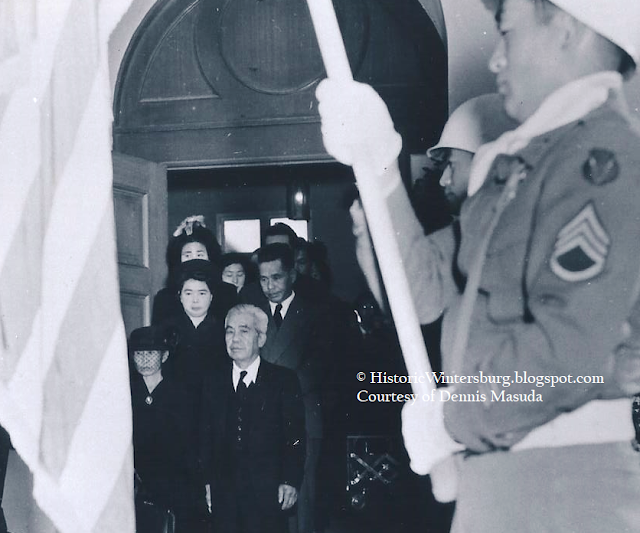 ABOVE: A Nisei military honor guard holding American flags flanks the entrance to the Wintersburg Japanese Presbyterian Church as the Masuda family departs the memorial service for Westminster Memorial Park in 1948. This was three years after leaving confinement at the Gila River Relocation Center in Arizona and three years after Mary Masuda confronted threats of violence during her attempt to return home to Orange County. (Photo snip courtesy of Dennis Masuda) © All rights reserved.

As a historian, I have written about the Masuda family’s story and the impact it had in 1988 when President Ronald Reagan signed the Civil Liberties Act.  He remembered the Masudas from that December day in 1945.  This was an American family, in the farm country of Orange County, whose story would resonate all the way to the White House.

It would be several years before Kazuo Masuda could be brought home to rest.  Finally, in 1948, the family and community were able to memorialize this hero who had walked on.

The funeral services were held with a full house in the Wintersburg Japanese Presbyterian Church with a Nisei military honor guard, before proceeding here, to the Westminster Memorial Park, to this place where we are today.

Looking at the photographs of that day, I am struck by the dignity, sadness and pride I see in the faces of those gathered to honor him.  It is what we feel here today. 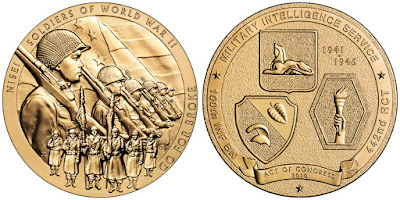 LEFT: The Congressional Gold Medal awarded posthumously to Kazuo Masuda and other Nisei soldiers of World War II. Kasuo Masuda is one of twelve Nisei soldiers featured in the Smithsonian Institute's 2016 digital exhibit, The Nisei Soldier: Congressional Gold Medal, http://cgm.smithsonianapa.org/ The Smithsonian explains, "This exhibition presents the extraordinary life stories of 12 Nisei soldiers who served in the US Armed Forces in World War II. While some had families in America’s concentration camps, all served with a highly uncommon and commendable sense of patriotism and honor. This is their American story."


The story of Kazuo Masuda continues to resonate seven decades after his death, as he is one of twelve Nisei soldiers featured in the Smithsonian Institute’s new exhibit on Congressional Gold Medal recipients, of whom Kazuo Masuda is one. 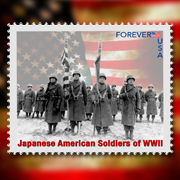 RIGHT: The Japanese American soldiers of World War II are one of the few military groups who have not been honored with a U.S. postal stamp, yet they remain the highest decorated units of all time. Learn more at Stamp Our Story, http://niseistamp.org/

There are generations of soldiers and families of soldiers who have persevered when the political climate made that difficult.  We live in a time when manners and respect seems to have faded.

This brings me back to what I was taught by my parents in my childhood.  It is the message conveyed by General Stillwell in 1945 and President Reagan in 1988.  It is still timely today, it is a message we still should be teaching our children, and the message I wish to close with.

On Memorial Day, we remember the fallen. Those who have walked on.  What we must remember is they walk past us every day.  Stand.  Show respect.  Cheer for them. Every day.  These are heroes."

All rights reserved.  No part of the Historic Wintersburg blog may be reproduced or duplicated without prior written permission from the author and publisher, M. Adams Urashima.
Posted by Surf City Writer at 4:19 PM