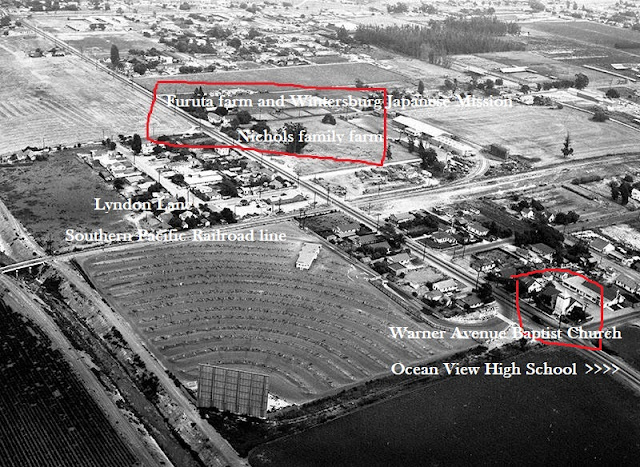 ABOVE: An aerial from 1962 shows the location of the Furuta farm and Wintersburg Japanese Mission complex at Historic Wintersburg.  The Furuta farm's former goldfish ponds are visible; by 1962 they were used for commercial water lily farming. Across from the Mission, off dirt road that is now Nichols Lane is the Nichols family farm.  The roadway running east to west in the center of the image is Warner Avenue (formerly Wintersburg Road). The Southern Pacific Railroad tracks run north to south in the center of the image, parallel to what is now Gothard Street, and at the center the Warner Avenue Drive In. (Photograph, County of Orange; 1962: Calisphere; annotated work) © ALL RIGHTS RESERVED

In 2014, the six structures at Historic Wintersburg received a 3S / 5S1 classification in the City of Huntington Beach historical survey for the General Plan Historic / Cultural Resources Element (2014). Volume 3, Appendix D, pages 162 - 163, Context and Criteria: Religion and Cultural History.  This classification means the structures are considered eligible for the California Register of Historical Resources and for the National Register of Historic Places.

This further documents the local historic designations, the first of which was noted 45 years ago in 1973 in the City Open Space / Conservation Report prepared for City of Huntington Beach General Plan, Figure 2-41, “Important Historical – Cultural Landmarks”. 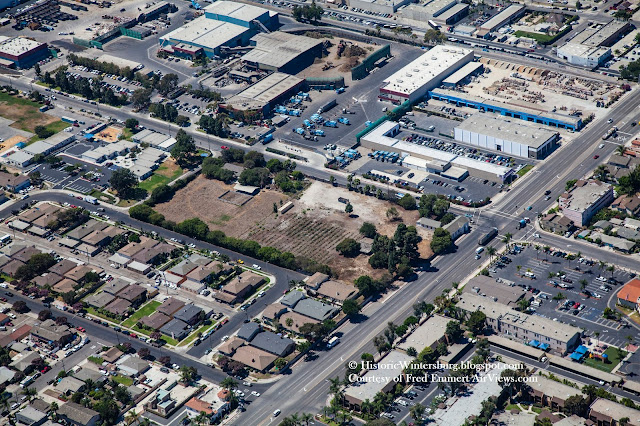 ABOVE: An aerial from 2014, reveals the density and urbanization in the former Wintersburg Village. Three sides of the Furuta farm and Wintersburg Japanese Mission are near residential neighborhoods, a preschool and elementary school to the south, a Church and school to the north, and the waste transfer operations of Republic Services, Inc. to the west. Preservationists believe historic preservation and environmental conservation, and re-greening of the remaining open space as a public historical park, will save significant American history and provide community benefit. (Photo courtesy of Fred Emmert, AirViews.com) © ALL RIGHTS RESERVED
This was followed in 1983--35 years ago-- with an analysis by Scientific Resource Surveys, Inc. for PRC Toups Corporation while conducting a historic resource survey for Caltrans’ "Warner Avenue widening and reconstruction project".The report determines structures associated with the Furuta farm and Wintersburg Japanese Mission are "potentially eligible for the National Register of Historic Places". 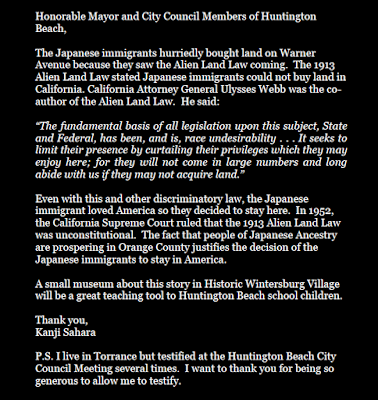 The report noted, "Without question all of these structures need to have their integrity safeguarded. There are very few remaining community structures of comparable importance still standing. Orange County, since 1950, has undergone such a transmogrification as to virtually wipe out all vestiges of what was a vital prewar Japanese community in Wintersburg and elsewhere, throughout the County.” 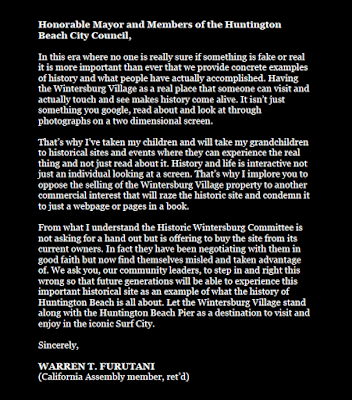 The Japanese American Council of Orange County confirmed the significance to Japanese American heritage in 1986, when they published the Historic Building Survey, with the Bowers Museum, which included the Furuta farm and the Wintersburg Japanese Mission. The majority of the structures noted in that County-wide survey are now gone. 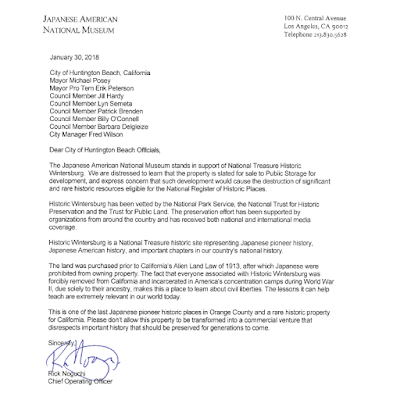 By state law, demolition or removal of a designated landmark or known significant cultural resources require the preparation of an Environmental Impact Report, per the California Environmental Quality Act.

In 2009, Galvin Preservation Associates was contracted by City of Huntington Beach to conduct a citywide historical resources survey, with a stated goal to look for properties of historic significance that may meet established criteria for state or national registry.  This report was received by the Huntington Beach City Council in 2014, including the documentation that upgraded the classification for the structures at Historic Wintersburg as eligible for the California Register of Historical Resources and for the National Register of Historic Places. 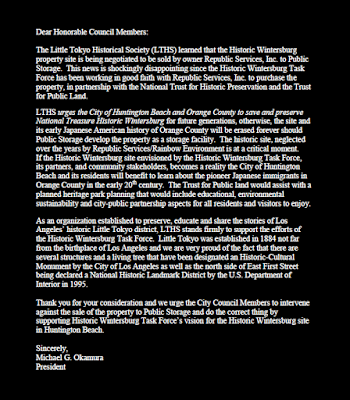 LEFT: Letter supporting the preservation of Historic Wintersburg from the Little Tokyo Historical Society, January 29, 2018.  The Little Tokyo Historical Society is one of the earliest and longest supporters of the preservation of Historic Wintersburg, with historical connections between the two communities dating to circa 1900. © ALL RIGHTS RESERVED

Historic Wintersburg has been working to purchase the property from Republic Services since they purchased it in October 2014, working with each new general manager of the Huntington Beach office for the past three years. There were assurances in 2016 and 2017 that there would be a cooperative and collaborative effort to achieve this, also reported in local and regional media.  We still wish to work with them in a collaborative and positive land purchase to save and preserve Historic Wintersburg. 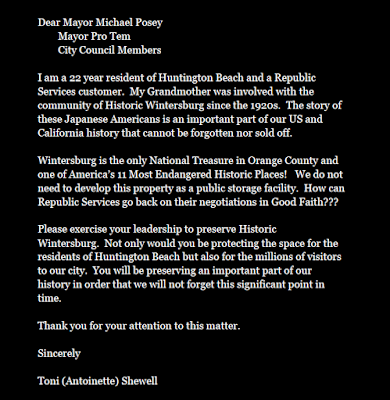 RIGHT: Letter supporting the preservation of Historic Wintersburg from Huntington Beach resident Toni Shewell, whose family has a long connection with the former Wintersburg Village. © ALL RIGHTS RESERVED

The current effort is to bring together all parties to work toward and allow the purchase for historic preservation, rather than self storage. We believe a National Treasure historic property--representing more than a century of Japanese American history and significant American civil liberties history--is worth saving in its entirety. 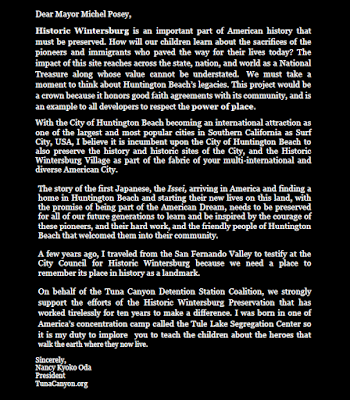 We are receiving letters, emails, and contact from those supporting the preservation of Historic Wintersburg as a National Treasure historic place, from Huntington Beach, Orange County, California, as well as nationally. We will continue to share their messages. Our deep appreciation to those who are coming forward to be a voice for this chapter of American history, increasingly endangered and erased in California.
© All rights reserved.  No part of the Historic Wintersburg blog may be reproduced or duplicated without prior written permission from the author and publisher, M. Adams Urashima.
Posted by Surf City Writer at 1:16 PM