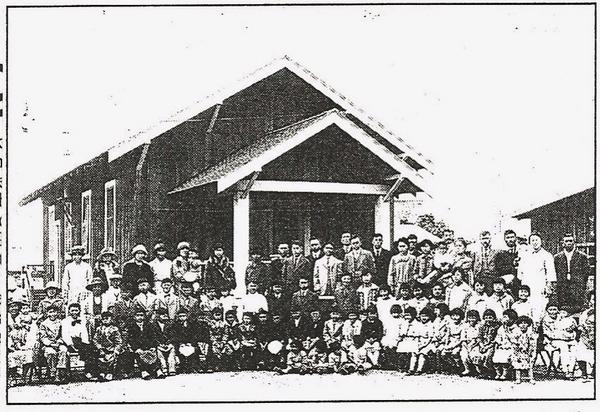 ABOVE: The Garden Grove Japanese Language School was one of the four Japanese Language Schools supported by the Wintersburg Japanese Mission, founded in 1904. The Garden Grove school was the first of the stand-alone schools, opening in January 1917.  At the time the Garden Grove school was demolished in 1991, it was noted in the archaeological report as the oldest wooden school building in Orange County. The school was located at 10771 Sherman Avenue and was replaced by the present-day Costco, despite opposition by the Orange County Historical Commission and Garden Grove Historical Society, among other county and state historical organizations. (Photo circa 1927, Archaeological Site Record, ORA 1307H, 1991)

We are pleased to announce our collaboration with Orange Coast Gakuen! Historic Wintersburg will be working with Orange Coast Gakuen to explore the vision of a restored historical site with green open park space and an educational and cultural center. Negotiations to purchase the property continue with Republic Services, supported by our national partners, the National Trust for Historic Preservation and the Trust for Public Land.


Orange Coast Gakuen has been providing Japanese language classes and cultural programs---like calligraphy, art, and flower arranging---for 42 years in Huntington Beach, without a permanent home. Their Saturday programs are open to all ages and to anyone who wants to learn.

The literal translation of "gakuen" 学園 is "study garden".  A restored and re-greened Historic Wintersburg with open park spaces and educational programming will complement the neighborhood and schools surrounding the property, while offering programming relevant to the history and saving a National Treasure for future generations.

LEFT: One of the many school contributions of the Japanese pioneer community was support for the first grammar school in Talbert (Fountain Valley).  Among those listed as presenting a check to the community school are founders, elders and congregants of the Wintersburg Japanese Mission. (Santa Ana Register, December 18, 1927)

The Language Schools functioned as schools and also as community centers for meetings of groups such as the grange or farmers' groups, civic efforts, weddings, funerals, and Japanese Associations. The Language School buildings also were open to neighbors and community groups who needed a place to meet.

Full circle
More than a century after the first Language School opened in Orange County, we're happy to come "full circle" and collaborate with Orange Coast Gakuen regarding the future of Historic Wintersburg!

*The only remaining building of the four original Japanese Language Schools in pioneer Orange County is Cottage #34 at Crystal Cove State Park. It is one of the schools supported by the Wintersburg Japanese Mission.

© All rights reserved.  No part of the Historic Wintersburg blog may be reproduced or duplicated without prior written permission from the author and publisher, M. Adams Urashima.
Posted by Surf City Writer at 12:35 AM