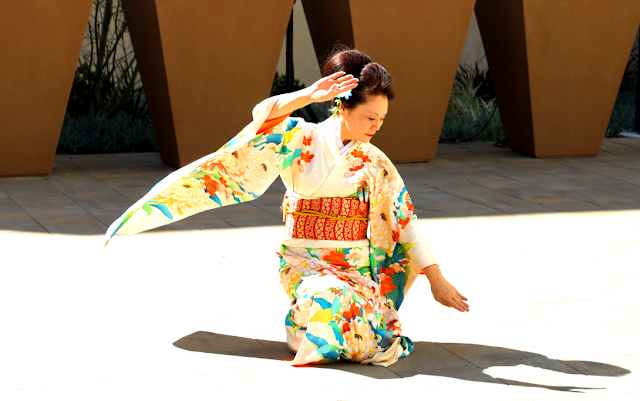 ABOVE: Nancy Teramura Hayata performs classical Japanese dance to Nada Sōsō in the Wintersburg / Furuta Courtyard. The song speaks of turning the pages and looking at old photographs, "however far your memories may fade, traces of you I hope to find." (Photograph courtesy of Jason Kusagaya) © ALL RIGHTS RESERVED

The Wintersburg / Furuta Courtyard is open to the public from dawn to dusk, at the residential community of LUCE at the intersection of Gothard Street and Edinger Avenue.  Enter through the pedestrian gate on the north side of LUCE--facing Edinger Avenue and nearest to Gothard Street--and walk through two public art courtyards inspired by local history. 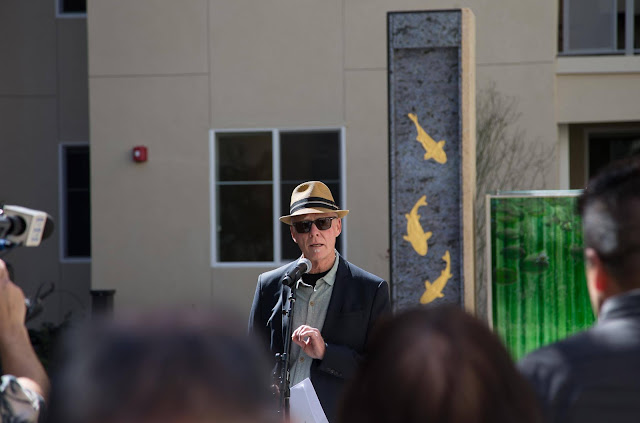 ABOVE: Artist Michael Davis speaks at the dedication of the Wintersburg / Furuta Courtyard, in front of the work "Fish Pond". (Photograph courtesy of Mark Bixby) © ALL RIGHTS RESERVED

The artist, Michael Davis, was selected several years ago for the artworks by the developers of LUCE. He took inspiration from the early history of Huntington Beach, particularly the history of the Japanese American farmers. During his research, he found Historic Wintersburg and was further inspired by the goldfish and flower farming history of the Furuta family.

"The book, 'Historic Wintersburg in Huntington Beach' by Mary F. Adams Urashima was a valuable resource for my research into the Furuta farm and the legacy of the early Japanese community," noted Davis, in a brochure explaining the artwork (below). Davis is a Los Angeles-based artist whose work is in museums and galleries, with public art installations in public parks and civic buildings across the United States and in Japan. At the dedication of the Wintersburg / Furuta Courtyard, Michael Davis was presented with a proclamation by Mayor Pro Tem Lyn Semeta, recognizing his contribution to local history and public art.

Water, one of the elements that sustained local farmers, meanders through the first courtyard reminding of the Colorado River. In the Wintersburg / Furuta Courtyard, water takes the form of a goldfish pond, with art glass water lilies and the shimmering gold of the living jewels that once swam at the Furuta Gold Fish Farm. 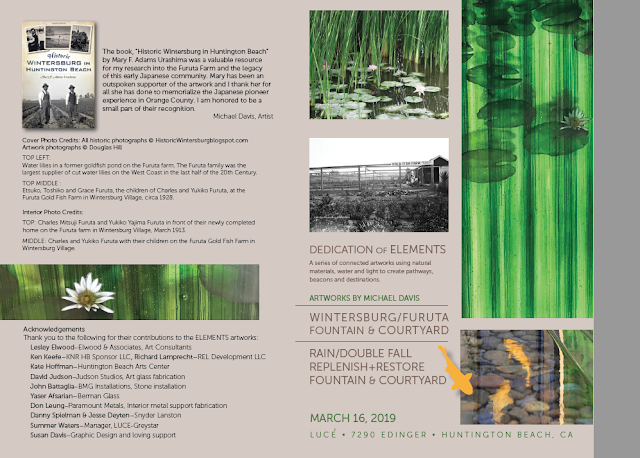 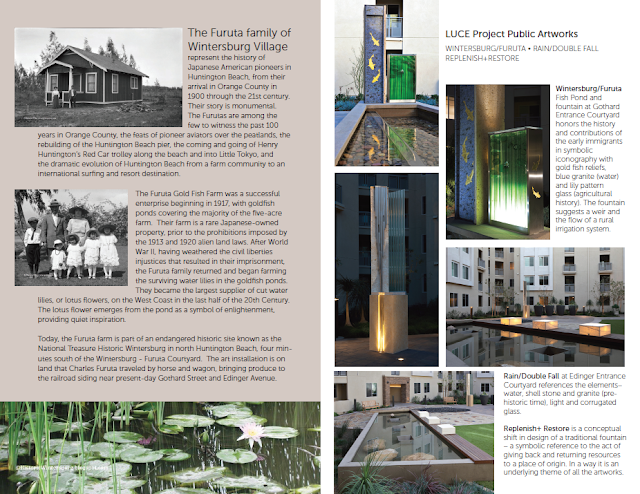 One of Wintersburg Village's most unique business enterprises were the goldfish farms, all owned by Issei (Japanese immigrants), including the Furuta, Akiyama and Asari families.  Evidence of the first goldfish pond on the Furuta farm is noted in 1917. Charles M. Furuta and his brother-in-law, Henry Kiyomi Akiyama, put in a pond and found the fish multiplied quickly. By the 1920s, goldfish ponds covered most of the Furuta farm, each species in its own little pool, including Comets, Black Moors, Fantails, Shubunkin, and Nymphs. To this day, goldfish and Nishikigoi (koi) ponds are found in landscapes around Orange County. 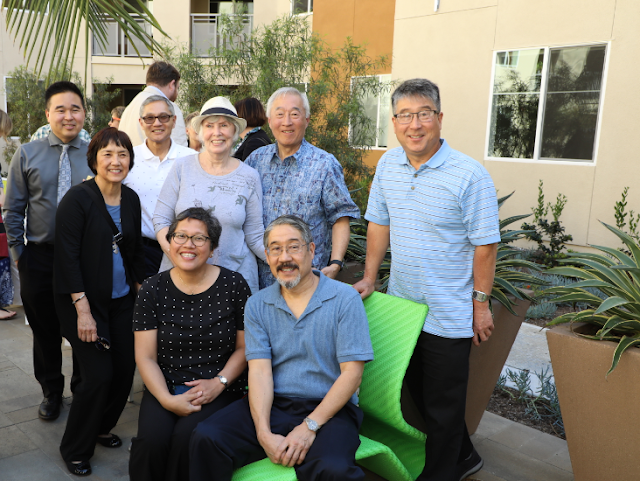 ABOVE: Members of the extended Furuta family, descendants of pioneers of Orange County, at the dedication of the Wintersburg / Furuta Courtyard in March. (Photograph courtesy of Jason Kusagaya) © ALL RIGHTS RESERVED

We extend our thanks to artist Michael Davis for his beautiful representation of the history and contributions of Japanese American pioneers in Orange County, and for the permanent tribute to the Furuta Gold Fish Farm and National Treasure Historic Wintersburg in Huntington Beach.

© All rights reserved.  No part of the Historic Wintersburg blog may be reproduced or duplicated without prior written permission from the author and publisher, M. Adams Urashima.
Posted by Surf City Writer at 6:32 PM