In the time of the virus 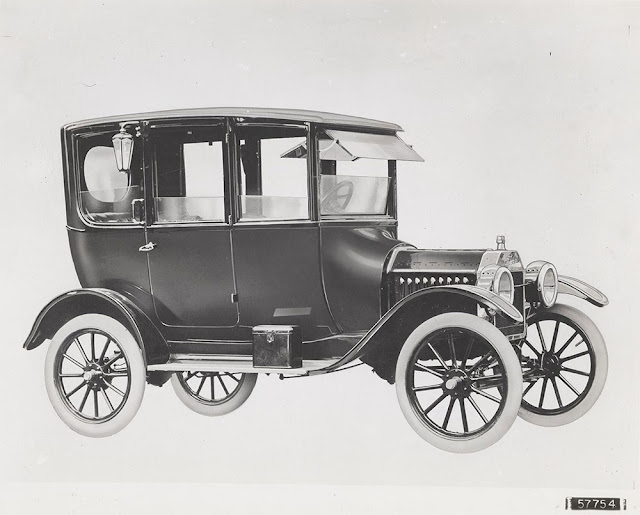 A 1915 Model T two-door sedan, the automobile driven over bumpy country roads to the Nishizu home by Mr. Goya when he came to their aid during the flu pandemic, circa 1918-1920. (PHOTO: Courtesy of the Free Library of Philadelphia)

In October 1918, the flu pandemic spreading in Orange County prompted the County's Board of Health to appoint three doctors to head up an emergency response. A "scarcity of doctors and nurses adds to the gravity of the situation," reported the Santa Ana Register on October 26, 1918. "That the situation is more serious than many people think was brought out yesterday...doctors are going night and day and are worked to the limit of their physical ability, that there is a decided scarcity of nurses and that there are a good many people who are not reporting their cases and others who are not observing quarantine regulations."

Orange County had a population estimated at 55,195 in 1918. The Santa Ana Register reported six county doctors who came together for the emergency response planning. They described a rapid spread of the virus and "an increase of fifty to 100 percent" west of the Santa Ana River. The shortage of nurses was so severe, the County called on "volunteers of any kind, women who may not have had any special training even as practical nurses, are needed in homes here, and women who are willing to volunteer for assistants for the county hospital should take the matter up over the telephone at once with the hospital, Orange 417 on the Pacific..." 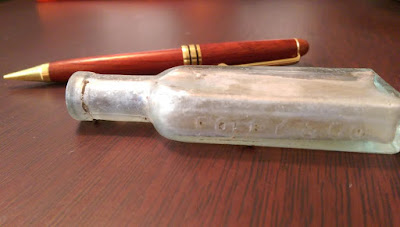 RIGHT: A Honey and Tar bottle uncovered in the former Wintersburg Village in 2015. Foley & Co.'s Honey and Tar syrup was marketed from the 1870s through the 1960s. It was widely promoted during the 1918 flu pandemic, which affected Wintersburg Village and Huntington Beach. The original mixture was seven percent alcohol mixed with a special solution of pine tar and honey, terpin hydrate, sodium benzyl succinate and gum arabic. Pine tar historically is used as a wood preservative on baseball bats and as a cure for skin ailments. In the case of Foley & Co.'s Honey and Tar, it was recommended for nagging coughs, pneumonia, and consumption. Pine tar was banned by the FDA in the 1990s due to a lack of proof of effectiveness. Even with honey, this did not taste all that good. (Photo, M. Adams Urashima, 2015) © ALL RIGHTS RESERVED


"After World War I...there came a time in the United States when an epidemic of influenza spread throughout the country and resulted in 548,000 deaths. Influenza is an acute infectious respiratory disease caused by a filterable virus. It was taken for granted that all members of every family would be afflicted by this flu. Our family was no exception. Every member of our family came down with the flu. I was only ten or so years old when this epidemic hit. One day we found out that my parents both had been infected, and that there was nobody to care for us. Suddenly, Mr. Goya came to our house. My mother asked him to please leave, or otherwise he would certainly contract the flu himself. But he utterly refused to go." 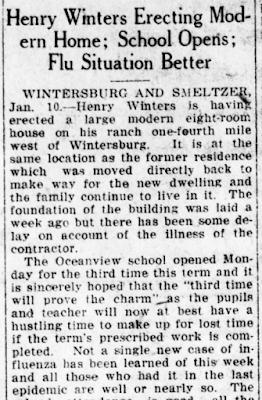 LEFT: The situation was hinting at improvement by January 1919 in Wintersburg Village. Henry Winters, for whom Wintersburg Village was named, restarted construction on his ranch home which had been delayed due to flu. In Orange County, entire households were sick at the same time. Four members of the Winters family were reported as succumbing to the flu in December 1918. The Oceanview school reopened for the third time in January 1919, optimistic that students were healthy and could return to their studies. (News clip, Santa Ana Register, January 10, 1919)

"Let me tell you about Mr. Goya. He was the most respected, intelligent, and eloquent Issei pioneer among the Kasuya Gun Jin Kai, a close-knitted group or club organized among the Issei who had come from my parents' area in Fukuoka. He had a mustache like Charlie Chaplin. He had his serious moments where he would just sit there thinking, but he also had his hilarious moments when he would laugh and tell funny, sexy stories. I overheard some of these stories, but I hesitate to repeat them now. His speech was full of humor, yet to the point, not long like the speeches my father used to make. When he spoke everybody was all ears and his remarks, filled with wisdom and humor, were the talk of the whole Kasuya group.

The most important thing is that he came to nurse our family knowing that we were all sick. To come to our rescue at the risk of his own exposure is a trait that is so beautiful. It is like the story of Father Damien, the Catholic priest who saw the sad condition of the lepers on Molokai island in Hawaii in 1873 and volunteered to tend to their spiritual needs. He managed by the labor of his own hands and by appeals to the Hawaiian government to improve the water and food supplies and housing. Thus, he gave his own life and died of leprosy [on April 15, 1889]. Anyway, Mr. Goya came to our place in an old Model T two-door sedan." The Nishizu family recovered and Clarence Nishizu became a key individual in the growth of Orange County. 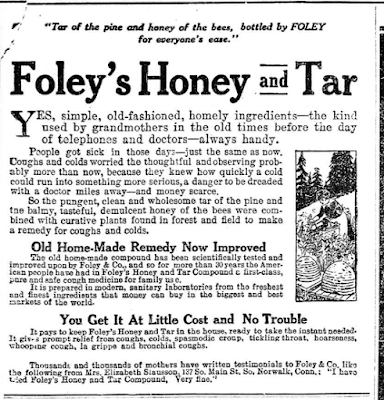 In February 1919, the Santa Ana Register reported that the virus "has proven to be one of the worst epidemics ever visited on the suffering world." The Register admonished people to stay home and observe quarantine, and not walk about and spread it to others. By June 1919, it was reported that California's flu cases from October 1918 through March 1919 had totaled 305,856, roughly ten percent of the state's population. There had been 200 virus-related deaths in Orange County in the two-month period of October-November 1918.

RIGHT: An advertisement for Foley's Honey and Tar from 1919, promoting the "clean and wholesome tar of the pine and the balmy, tasteful, demulcent honey of the bees combined with curative plants found in the forest and field."

Reported cases of the virus appeared to have peaked by March 1919 and some quarantine cases were beginning to walk out into the sunshine.  However through 1920, the Santa Ana Register continued to provide reports on flu or suspected flu, including reports from other states and around the world. Having seen friends and communities suffer, a vigilance about public health practices remained for a generation as efforts to develop immunizations and means to combat disease became a global mission.

On New Year's day 1920, the New York Times reported "there were times during 1919 when the era leading up to the war seemed, in the casual retrospect, like some far-off Golden Age." While some communities improved, the virus continued to return in various parts of a tired country in 1920. In California, every resident of the Paiute community in Inyo County--later home to the Manzanar Relocation Center during WWII--was found by a mail carrier to be stricken with the virus and without medical care. One hundred died.

The virus did ultimately diminish by the end of 1920. It had touched every family and altered the perspective and politics of the country.

Communities coming together to help each other through tough times is the history of the peatlands. It's how missions were built and barns were raised, how schools set up classes in donated buildings, and how the harvest was done.  It's how families endured loved ones heading off to a world war. And, it's how families survived a global pandemic a century ago. 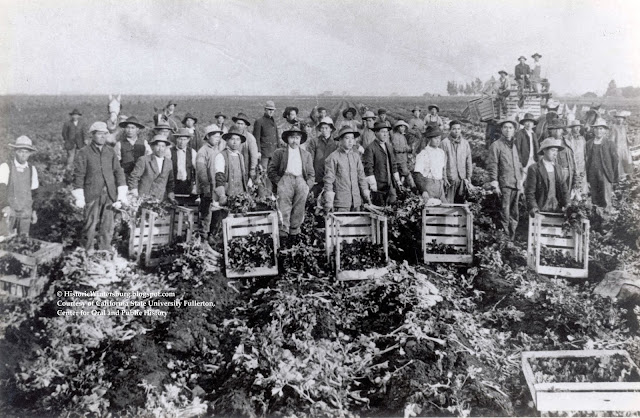 ABOVE: The celery harvest in the peatlands of Wintersburg Village and Smeltzer. (Photo courtesy of Center for Oral and Public History, PJA 026) © ALL RIGHTS RESERVED

© All rights reserved. No part of the Historic Wintersburg blog may be reproduced or duplicated without prior written permission from the author and publisher, Mary Adams Urashima.
Posted by Surf City Writer at 6:02 PM