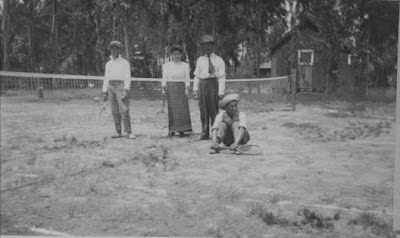 The Furuta family at the tennis court on their property at Wintersburg (Warner) Avenue and Nichols Lane, circa 1920s.  Charles Mitsuji Furuta constructed the tennis courts for his wife, Yukiko, who had enjoyed playing tennis during her childhood in Japan.  (Photograph courtesy of California State University-Fullerton, Center for Oral and Public History)

Editor's Note: the next post on Historic Wintersburg will return to sharing history with information about the Tashima family, who owned a market in Wintersburg in the early 1900s.  Below is an update on the action taken by the Huntington Beach City Council, which affects the future of Historic Wintersburg.

The ad hoc committee will include three city council members, the property owner, and members of the community.  As a sub committee of the city council, these will be open, public meetings and those interested in the future of Wintersburg are welcome to participate.

The draft Focused Environmental Impact Report(FEIR)---required by California law---will be released later this summer.  This report is to include alternatives for historic preservation in situ (onsite), analysis regarding relocation of the historic structures, and the application to demolish the structures.

We periodically will post updates on the public environmental process and the ad hoc committee's efforts.

Thank you to our readers who sent comments supporting preservation of Historic Wintersburg.

"These old buildings do not belong to us only, they belong to our forefathers and they will belong to our descendants unless we play them false. They are not in any sense our own property to do with as we like with them. We are only trustees for those that come after us."
William Morris

All rights reserved.  No part of the Historic Wintersburg blog may be reproduced or duplicated without prior written permission from the author and publisher, M. Adams Urashima.
Posted by Surf City Writer at 5:22 PM