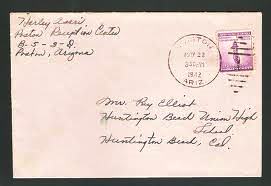 Among the touching artifacts archived relating to Japanese American incarceration during World War II are those relating to the interaction with teachers.

The teachers knew their students, had watched them grow up, and knew their parents. In farm country, everyone knew each other's families and their histories. The virtual lifeline provided to the incarcerated by teachers helped keep Issei and Nisei connected with the outside world and focused on better days ahead.

Add to that list Ray Elliott and teachers at Huntington Beach High School.

Known in its early years as  the "School on Wheels," Huntington Beach High School struggled in its early years to find a home.  First opening in Los Alamitos in 1903, the high school moved to Garden Grove in 1904, and then to Wintersburg in 1905.  Classes in Wintersburg were held in the armory building at the intersection of present-day Warner Avenue and Gothard Avenue.

Writing in the mid 1950s about the school's history in Wintersburg, Raymond M. Elliott wrote, "although the enrollment was very small, Mr. Solomon introduced basketball. He induced the six boys in the school to participate in this sport and succeeded in defeating every other school with which the team competed."

Elliott started as a mathematics and history teacher at the high school in 1923, and was promoted to vice principal in 1929 and principal in 1945. (Note: the letters are addressed to "Mr. Elliot"; school records indicate it was "Elliott.") 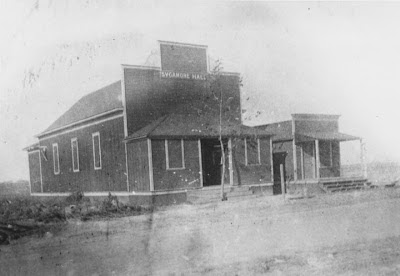 RIGHT: The Sycamore Hall armory building was moved from Talbert (Fountain Valley) to Wintersburg and served as the Huntington Beach Union High School in 1905.  In 1904--the year the Wintersburg Japanese Presbyterian Mission was founded--meetings were held in the armory to discuss building churches in Wintersburg.  Attendees at meetings in the building sat on celery crates. (Photo, Santa Ana Public Library)
The high school was on the move again in 1906, settling into the basement of Huntington Beach's Methodist Auditorium until moving to their permanent home on Main Street in 1908.   Students from the rural countryside made their way to school in the back of a two-ton truck purchased by the HBUHSD, which also picked up students arriving by "electric car" from Newport Beach and Balboa.

The Asari family
Tsurumatsu "T.M." Asari is reported in oral histories as being the first Japanese to arrive in Orange County.  He is one of two Japanese in Wintersburg-Huntington Beach area to have bought land prior to the Alien Land Law of 1913, the other being Charles Mitsuji "C.M." Furuta.

T.M. Asari owned his property by at least 1903, as there is a record of discussion in the City of Huntington Beach archives between Asari, as a landowner, and the Talbert Drainage District on January 1, 1904.  His property was on the north side of Wintersburg (now Warner) Avenue.  In addition to farming, Asari ran the Asari Market, later owned by the Tashima family.

Asari also was one of Wintersburg's three goldfish farmers.  As a teenager, Harley Asari--born in Wintersburg in 1912--was already helping his father with the business (Goldfish on Wintersburg Avenue, http://historicwintersburg.blogspot.com/2012/02/goldfish-on-wintersburg-avenue.html).

March 1942 and rumors
Ellen McCarty mentions the Asari family and local goldfish farms in her 1999 Waves of Time column for the Huntington Beach Independent.

"On March 27, 1942, General DeWitt ordered all Japanese to be removed from Orange County.  The German and Italian immigrants were allowed to stay.  By the end of the week, all Japanese who had registered at Huntington Beach were loaded onto buses and sent to the Poston Relocation Center in Arizona under military escort," writes McCarty. 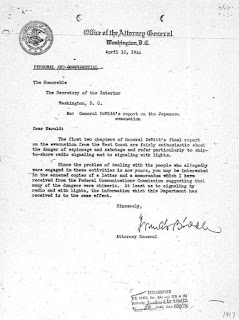 One of the rumors reported in a California State University-Fullerton oral history conducted forty-four years ago in 1968 with Lee Chamness, Jr. relates to the local goldfish farmers.  Chamness was the son of a Huntington Beach city councilman who resigned office to become the town civilian defense coordinator and assisted the FBI arrest local Japanese, including those in Wintersburg.

"...during the outbreak of the war (Wintersburg) had a tremendous goldfish farm with ponds on the ground, and they were all covered with a netting," Chamness--10-years-old in 1942--told his interviewer, John Sprout.  His interview reflected childhood memories of adult conversations, rife with rumors of the time.

"As it happened, all this netting that was covering these ponds were radio antennas," said Chamness.  "They had a communication setup with Japan that was unbeatable. They could really talk."

"Two major fisheries owned by Japanese residents, Asari and the Orange County Fish Hatchery, were seized and searched," reported columnist McCarty decades later.  "Nothing suspicious was found, but the owners and many other Japanese lost their property and businesses during the war..."

It is important to note that all three of Wintersburg's Japanese goldfish farmers returned after World War II confinement and none were ever charged or convicted of any wrongdoing. No Japanese American was ever convicted of acts against the United States, per Congressional findings of the 1980s. 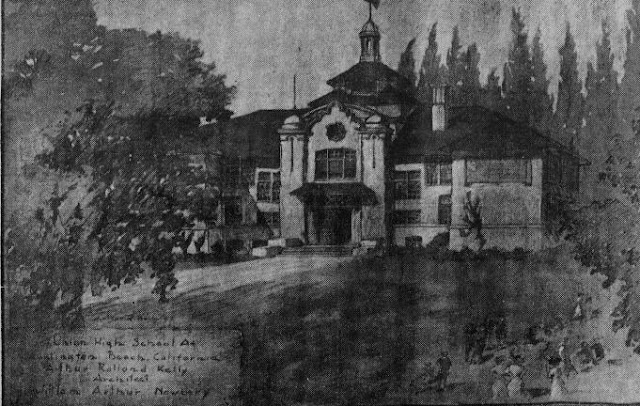 
Finishing high school
By the time of evacuation in 1942, T.M. Asari was 71 years old and had been a U.S. resident for 42 years--over half his life.  Harley Asari, a Nisei, was 30 years old and would have known Ray Elliott from his high school years.  On a 1920 "Huntington Beach - Newport oil fields" map, there also is a notation of an Elliott owning land immediately adjacent to the Asari family on Wintersburg Avenue. 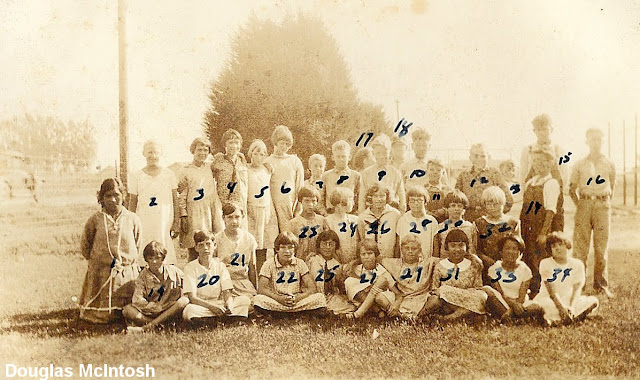 Yoshiyuki Tashima, a Huntington Beach High School senior, recalled in his 1974 oral history interview with Pat Tashima for CSU Fullerton that his family had to evacuate one month before his high school graduation.  He "wrote to the principal of Huntington Beach High School (then McClelland G. Jones) to inquire about my graduating with the class, and he wrote back saying all I had to do was complete one course, and that was civics, and they asked me to write a paper on the relocation camp."
"So I wrote that and turned it in and they gave me a passing grade," said Tashima, whose family owned the market in Wintersburg once owned by the Asari family.  "So I was able to get my diploma with my graduating class."

Tashima also kept in touch with his family's neighbors, the Renfros, who he had known since second grade and considered "my second parents."  His friend and classmate Ed Renfro--a 1942 Huntington Beach High School graduate--went on to become a well-known artist and children's book illustrator, after serving in the air force in Germany during World War II. 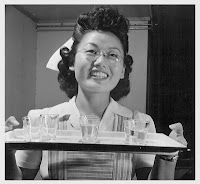 Kiyoko Tatsukawa, another Huntington Beach High School student, continued her studies at Poston and became a nurse's aid in the Poston Hospital in 1943.   The War Relocation Authority photographed her smiling in a nurse's uniform.

"...It was an enjoyable three years...high school was very pleasant because my parents encouraged us to participate in whatever activities we were interested in," Endo told her interviewer.  " After school, they had a girls' athletic association. I participated in and lettered in every sport, including basketball, baseball, and hockey. I had swimming in gym...I played on the tennis team. My brother also stayed after school for football and baseball but he broke his collarbone playing football, so my parents wouldn't let him play football any longer. Instead he helped with the coaching."

Endo remembers one of her Huntington Beach High School teachers wanted to personally intervene to stop her evacuation.

"...I can remember when we found out that we had to evacuate, how our Latin and algebra teacher, Miss Margaret Bliss--she was a dear soul--just thought it was terrible that we had to evacuate. So she said, 'I'm going to find out if I can keep you girls with me,'" Endo recalled.  Bliss was noted as a University of Minnesota graduate who had begun teaching at the high school in 1927.

"There was another friend, Toyoko Kitajima, a Nisei, also. We both had about the same classes and we were both in her algebra and her Latin classes, so (Margaret Bliss) said, 'You girls shouldn't have to leave. I'm going to find out if I can keep you with me. I'll be responsible for you,'" continued Endo.  "She was a dear. We realized there was just no way. I told her I was sure that there was no way she could keep us." 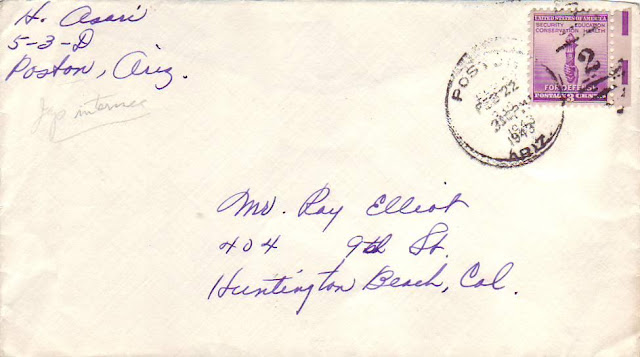 ABOVE: Another letter from Harley Asari to Ray Elliott, from the Poston Arizona Relocation Center in February 1943.  By then, Ray Elliott had provided his home address to Harley Asari.  In 1944, Harley was permitted to leave Poston on work furlough in Colorado. (Image M. Urashima. Courtesy  DK Enterprise, www.dickkeiser.com) © ALL RIGHTS RESERVED

The Asaris returned to their property and goldfish farm in Wintersburg after the war.  Like the Furutas and the Akiyamas, the Asaris found their ponds in poor condition, filled with weeds and silt.  They started over and recovered the ponds, operating a hatchery business well after Wintersburg was annexed into Huntington Beach in 1957-1958.
Ray Elliott went on to become principal of Huntington Beach High School, then superintendent of the Huntington Beach Union High School District, and helped advocate for the creation of Orange Coast College.

The contents of the letters from Harley Asari to Ray Elliott are unknown.  What we do know is that Elliott was among the educators that represented comfort and support for those far from their Orange County home.

A note of thanks

When Dick Keiser of Silverdale, Washington, heard the story behind the envelope (left)---that it was one of Historic Wintersburg's goldfish farmers writing from internment to a Huntington Beach High School principal ---he generously donated the envelope to Historic Wintersburg.   This artifact is now back home in Huntington Beach, awaiting future historical exhibition. (Image, M. Urashima) © ALL RIGHTS RESERVED


© All rights reserved.  No part of the Historic Wintersburg blog may be reproduced or duplicated without prior written permission from the author and publisher, M. Adams Urashima.
Posted by Surf City Writer at 2:12 PM